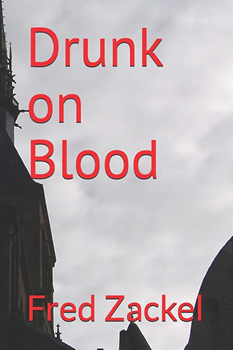 Author Fred Zackel brings us new thrills with a paranormal spin in his latest novel, DRUNK ON BLOOD.

The Church has enemies. Many are not of this world. Cricket West is a Las Vegas private eye. A broken-nosed blonde on the dark side of 30, Cricket has been hired by the archbishop of Las Vegas and partnered up with a Jesuit monsignor from the Vatican. Her job was to observe and bear witness to the strange and unholy evils in the Catholic Church that he must confront. What could be weirder? Carry your gun, she was told. Always reload quickly.

What can go wrong?

The Big Thrill recently checked in with the author to discuss this chilling new story.

A great character study (Cricket & the Jesuit) and some silly over-the-top horror thrills.

Being a 10-year-old kid on Saturday mornings watching Creature Features, I always wanted to write a vampire story. They were so cool! But I never could grasp a new idea, a new angle…the stories were so conventional. Plot-driven with paper-thin characters. Then I saw where lions after a kill are so drunk on meat that they sleep for hours. It took another dozen years for the world to enter a global lockdown, where there were shortages of toilet paper, sourdough, and sanitizer. The lockdown “explained” the story.

The challenge was the story was 5,000 words in 2009 and it grew sentence by sentence into 55,000 words this past month. The opportunity was that I was able to create an original silly novel of character.

The Las Vegas PI Cricket West was the most complex and demanding character I’ve ever written. We took the kids to Vegas some years ago when they were little, and our buffet hostess at one hotel claimed her name was really Cricket, which we took as a good omen. (I won 85 bucks on the nickel slots.) A name I decided MUST be used somewhere in some story.

As I said, Cricket West is my most complicated character. I never know what she will do or say or think. But she is insistent. And DRUNK ON BLOOD grew by millimeters. One night a month ago, I was positive the work sucked royally. I hated what I had done. I was shamed and embarrassed by it all.

I had nightmares that continued for several mornings. Oh, I can’t do this. I have cheapened myself. Then a few mornings later… First cup of coffee. I remembered…(wait for it)…the Spanish painter Francisco Goya. Oh yeah, he fits! Wrote for an hour. Added him to the ending. Stared at it for another cup of coffee. Oh. Maybe it’s okay now? Sure. I can see it.

Are there any genre conventions you wanted to upend or challenge with this book?

I can’t say without spoilers. But vampires, when drunk on blood, aren’t what anyone would expect!

Some silly, downright goofy elements, but also some unique and unexpected explanations. I think of the elements as being logically thought-out. (All things considered.)

I want to thank novelist Loren Estleman for letting me see Cricket West as a broken-nosed blonde.

In January 1978 Ross Macdonald wrote, “Fred Zackel’s first novel reminds me of the young Dashiell Hammett’s work, not because it is an imitation, but because it is not. It is a powerful and original book made from the lives and language of the people who live in San Francisco today.” In 1982, that novel was made into an NBC TV movie starring and co-produced by O.J. Simpson. Ten years later he had earned a Ph.D. in English. He taught university for a couple of dozen years and now is retired. He still writes.