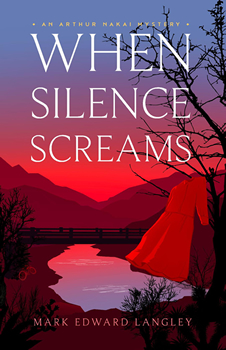 Mark Edward Langley was born in Richmond, VA on July 24th, 1960. When he was nine, he moved to a south suburb of Chicago, where he lived until his father was transferred to Houston, TX. Langley began his writing career in his thirties. With no real training aside from one creative writing course at a local college, he just sat down and began.

Mickey Spillane, John D. MacDonald, Robert B. Parker, Tony Hillerman, and Ernest Hemingway all inspired him; but he also worked at a bookstore in Houston, TX, which further lit his passion. After retirement, he finally decided to give it his all and try writing as a career. He thought one day it might be too late, and he’d wish he had.

Now, Langley is the award-winning author of the Arthur Nakai mystery series—Death Waits in the Dark won both as a finalist in the American Book Fest Awards and the coveted Feathered Quill Award for best mystery of 2021. His third novel in the series, WHEN SILENCE SCREAMS, will be released this month.

WHEN SILENCE SCREAMS is fictional, but the events and information discussed are real. In this story, Arthur Nakai, armed with his newly minted private investigator license, gets a visitor on his doorstep on White Mesa. Melanie Manygoats and her young son arrive on a cold winter’s day, and Arthur soon finds himself involved in searching for her 19-year-old Navajo daughter.

Meanwhile, Navajo Nation Police Captain Jake Bilagody has his own problems. A 15-year-old girl is missing, and her family is terrified. The two cases may be related but also part of a bigger, more horrifying picture.

When asked about what gave him the idea for this story, Langley says he knew he had to do something to bring attention to the missing and murdered girls and women on the reservations in both Canada and the US after reading their stories and watching their families’ reactions on several documentaries. He was appalled that no one outside the Native American populations seemed to care. In the year 2016 alone, 5712 women went missing.

But how do you pull from a headline to create something as powerful as WHEN SILENCE SCREAMS?

“For me, the hardest part of writing is the plotting,” Langley says. “I research thoroughly, but then have to wade through that research and form a coherent storyline. I have three-inch binders of each novel’s research. Everything ranging from ideas to closed law enforcement case files and even snippets of dialogue get mixed among the reams of papers. Once collated, I map out each chapter and begin.”

Aside from the main storylines in each book, he keeps his themes pertinent to protagonist Arthur Nakai and his wife Sharon. Langley says their personal story is something his readers fell in love with—their struggles as a couple coping with the loss of their only child makes them real. Life, as in fiction, only moves forward with some sort of conflict, whether it be in the mind or the soul. Arthur’s military history, his struggle with PTSD, and his need to help his own team from when he was in the Marines gives him another dimension.

When it comes to research, everything is fair game for Langley. In WHEN SILENCE SCREAMS, he watched and read as much as he could and spoke with various people who could give him insight into trauma—whether it be in relationships, jobs, or other experiences.

Additionally, he was able to interview some of the Navajo people with regard to the topics affecting their daily lives. With this information in his back pocket, he was able to write relatable characters that make readers cry, laugh, and cheer. It’s similar for setting. He feels he can’t write about New Mexico without actually driving the hard-packed dirt roads, the asphalt highways, and experiencing all the unique tastes.

Langley’s advice to writers? Never give up.

“Never give up on your dreams or goals. It may sound common, but it’s true,” he says. “When people tear you down or label your dream as stupid, keep in mind that they don’t understand because your dream is not their dream. Only you can make your dream come true. Commitment and perseverance are what sets you apart from the rest, so…never give up!”

Langley is currently working on the fourth book in the Arthur Nakai series (Broken Glass) as well as developing a new series with different characters, also set in New Mexico.

Mark Edward Langley was born in Richmond, VA on July 24th, 1960. When he was nine, he moved to a south suburb of Chicago, where he lived until his father was transferred to Houston, TX. Langley took a job with B. Dalton Booksellers and begun his love for reading books. Langley has always felt a kinship with the American Southwest. When he was 12, his parents took him on vacation out West, and his heart and soul were touched by the beauty of the landscape and the wonder of its people. When he was older, he began reading Robert B. Parker, Mickey Spillane, John D. MacDonald, Ernest Hemingway, Tony Hillerman, and, more recently, Craig Johnson of Longmire fame. It was when he took a two-week trip into the West of his youth in his thirties that he realized he had found his true home. Researching his debut novel, Path of the Dead, he drove from Albuquerque, New Mexico to Glacier National Park, Montana, traveling through the beautiful and iconic scenery that was to become the book’s majestic backdrop. Upon revisiting New Mexico, doing research for his second novel, Death Waits in the Dark, he had the wonderful opportunity to meet with some of the Navajo people and have an open and respectful conversation. Langley is the award-winning author of the Arthur Nakai mystery series; Death Waits in the Dark was a finalist in the American Book Fest Awards and won the coveted Feathered Quill Award for best mystery of 2021. His third novel in the series, WHEN SILENCE SCREAMS, will be released in August of 2021. He is currently writing his fourth novel of the series, Broken Glass, due out August 2022.