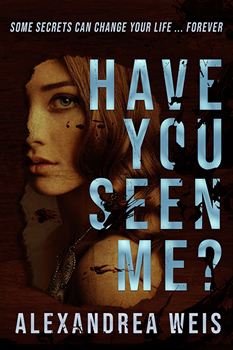 As Alexandrea Weis’s HAVE YOU SEEN ME? begins, Waverly Prep’s Lindsey Gillett is missing. And she’s not the first girl at the exclusive school to vanish without a trace. To help cope with the mystery, new history teacher—and former Waverly student—Aubrey LaRoux organizes a small student investigation team. When the members start turning up dead across campus, Aubrey suspects there’s more going on than anyone is willing to admit. The murdered students all had something in common with Lindsey: They shared a secret. And what they uncovered could threaten the future of the historic school. At Waverly Prep, someone wants to keep the past buried—along with anyone who gets in their way.

Author Alexandrea Weis grew up the child of a film director.

“My father,” she says, “was an independent film producer and director who worked on some large productions, from James Bond films to Sergio Leone Westerns to smaller productions based in New Orleans. I was raised on motion picture sets and learned how to do everything behind the scenes—my father insisted. All that experience taught me a great deal about storytelling and is probably why everything I write tends to have a cinematic scope. From characters to settings, I’ve learned that details matter and how to utilize them in a story. I like to paint vivid pictures with my words, and that comes from years of looking at stories through the lens of a camera.”

Weis has written both screenplays and novels, citing numerous differences between the two forms.

“You have so much more leeway to incorporate description and emotions in a book that are not used in a screenplay,” she says. “Dialogue is everything in a script, and you tend to focus on that, but novels leave you with so much more ability to bring the story to light. You also have timing to consider, length of a scene, and running time in a screenplay. With a novel, there are few limits, which allows your imagination to soar. Scripts require you to think in a more concise format, and you have to refocus your brain since you have to concentrate on different matters for each medium.”

Which films have influenced Weis’s writing the most?

“Epic stories with stellar characters and gorgeous backdrops always suck me in,” she says. “The Ten Commandments (Yul Brenner’s Ramses), Ben-Hur (that chariot scene), Cleopatra (those sets), Rebecca (the spine-tingling fear), Star Wars (unforgettable characters), Jaws (who didn’t have nightmares?), and the Indiana Jones movies. Each was a cinematic masterpiece with classic lines and memorable characters that have influenced many of us throughout our lives. These films taught me to picture what I want to write well before putting pen to paper. The imagery on the screen was something I wanted to incorporate to immerse readers in the time and place of the story. Also, picturing what the characters were saying and the way they said it helps set the book’s tone. Seeing all this play out on the big screen as a kid helped set up the little screen in my head.”

HAVE YOU SEEN ME? uses New Orleans—where Weis lives—as a backdrop. What makes the city unique for storytelling?

“The city is a real character,” she says, “no matter if it is in a book or movie. The scent of exotic spices and the humidity that never leaves, colorful street artists and the numerous festivals, the sounds of jazz and blues that permeate every crevice, and the lively, charismatic people give New Orleans a life force that no other place on earth can match. Its history adds to its magic, and for me, it has saturated everything I write.

“What makes New Orleans unique,” she continues, “is its multicultural past. Every tradition, every event, every milestone is significant. Whether it is red beans and rice on Mondays or mandatory fish fries during Lent, what we embrace here as a way of life leaves a lasting impression on many people. I guess it’s all the little things New Orleans is that make it so charming and unforgettable.”

Aubrey tells her students, “To see a place, really see it, you must understand the people who lived and died there. When you grasp their tragedies and triumphs, you learn to respect the past.” How does that philosophy work its way into Weis’s writing?

“People are the sum of the events that have fashioned them,” she says. “No one is immune to their emotions, and happy or unhappy events leave impressions on the land. To ignore such feelings is to do injustice to a person, character, or even a place. You can’t understand any place or any person without perspective. You must embrace all that was to understand what is before you.”

Weis grew up knowing Tennessee Williams. What did she learn from his writing?

“Tennessee was an exceedingly kind man,” she says, “and always good to me. I didn’t know who he was at the time because I was a small child, but we would sit and talk about lots of things including his writing. What I learned most from him stuck with me: it was about writing characters. He told me that his best characters were a blend of the people he knew with parts added to give them flare. He loved creating memorable characters and always told me it was the people in the story that mattered. He told me to pull from every part of life to build a character to make them real. If they are real to you, then the reader will become lost in them.”

Finally, I asked if she could put together her dream panel for ThrillerFest, who would be on the panel, why, and what would the topic be?

“I would love to see an all-women thriller panel,” she says. “With Heather Graham, Lisa Jackson, Sandra Brown, Iris Johansen, and Erica Spindler, who have all written books set in New Orleans,” she says. “The topic would be what you asked above. What they believe makes New Orleans so different, and why they wrote about the city. What they love about it and what they found the most challenging aspect to recreate in their stories.”

Alexandrea Weis, RN-CS, PhD, is a multi-award-winning author, screenwriter, advanced practice registered nurse, and historian who was born and raised in the French Quarter of New Orleans. Having grown up in the motion picture industry as the daughter of a director, she learned to tell stories from a different perspective. Infusing the rich tapestry of her hometown into her novels, she believes that creating vivid characters makes a story moving and memorable.

A member of the Horror Writers Association and International Thriller Writers Association, Weis writes supernatural, horror, mystery, and thrillers. She lives with her husband and pets in New Orleans, where she is a permitted/certified wildlife rehabber with the Louisiana Wildlife and Fisheries and rescues orphaned and injured animals.