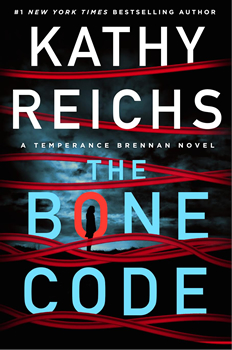 New York Times bestselling author Kathy Reichs has always been fascinated with the evolution of technology, in particular when that evolution happens ahead of the legislation to control it.

So when she stumbled upon an article about a Chinese scientist who had used human genome mapping to create “designer babies”—not for horrible, but still illegal purposes—her creative brain began working overtime on how she could use this as the basis for a new Temperance Brennan thriller.

THE BONE CODE—Reich’s 20th series installment—begins when a medical waste container washes up on shore after a storm hits the South Carolina coast. In it are two decomposed bodies wrapped in plastic. For Temperance Brennan, the bodies of the woman and child remind her of an unresolved case 15 years in the past.

Meanwhile, an organism is creating a deadly outbreak that can cause illness—and death—in humans, but is spread from dogs. Although capnocytophaga is an actual disease, Reichs says in real life, human infection is rare—very few succumb to the pathogen. But in this post-COVID world, the thought of a new pandemic is creating palpable fear, suspicion, and violence.

It might be easy to assume that Reichs wrote THE BONE CODE as a type of response to COVID-19, but she confesses that she started this book long before the pandemic had even begun.

“I was just looking at issues that I thought might be on people’s minds—infectious disease and modifying the human genome were two of them,” she says. “COVID hadn’t happened yet, so those references came in later.”

To get the science right, Reichs says she spent hours researching medical literature—sometimes using it to help her sleep—or talking to physicians about the things she didn’t understand or needed more help learning about. That could make for jargon-filled prose, but Reichs is a seasoned pro and has the balance down to…well, a science.

THE BONE CODE reunites Brennan with her longtime on-again off-again boyfriend, Andrew Ryan, which both brings Reichs back to Montreal—where several books in the series are set—and provides the necessary humor to pull the reader out of the darkness inherent in her work. The two provide an easy banter that makes us root for them as a couple.

Things look to be heading that way in THE BONE CODE, but Reichs cautions fans not to get too comfortable with their relationship just yet. “They’re living together now,” Reichs says. “But who knows what’s going to happen in the future?”

Reichs also introduces (or re-introduces) us to a small cast of new and recurring side characters, including Detective Tonia Vilosky, an African American woman of few, and often caustic, words. Reichs says she hopes to bring her back in the series—confirming there will definitely be more mysteries for Brennan to solve.

That’s good news for fans who’ve been with Reichs since Deja Dead’s debut in 1997—but also for readers just jumping on the Bones bandwagon at Book 20. Reichs says she keeps those new readers in mind as she writes, looking at different ways to introduce Brennan without bogging down the plot with too much backstory.

Finding that balance can be a challenge, but clearly one Reichs is up for—she’s already hard at work on Book 21. Tentatively titled Cold Cold Bones, the novel will bring in a number of cases from Brennan’s past. Unfortunately that’s all Reichs is willing to reveal.

Until then, readers should watch for information about a forthcoming short story collection called Prey in which Reichs’s contribution, “Owl,” introduces a new character —a character that could kick off a fresh series.

“Anything’s possible,” she says. “We’ll just have to see how much people like the new character.”

Our guess is a lot, if the response to Brennan is any indication.