Truth, Trauma, and the Legacy of Abuse 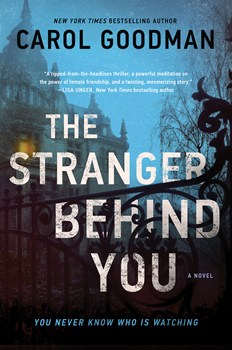 “We can’t build a safe—or just or free—world by burying the secrets of the past or hiding injustices or by telling only part of the story. We can only find true refuge by knowing the truth.”

So writes bestselling author Carol Goodman in her newest thriller, THE STRANGER BEHIND YOU. With a twist of historical fiction, she addresses the #MeToo movement and brings sexual abuse and its aftermath into the open.

Joan Lurie is a reporter for New York City magazine Manahatta, getting the job after she left The Globe when she discovered Editor-in-Chief Caspar Osgood sexually assaulted his assistant. When her new editor, Simon Wallace, at Manahatta hired her, he’d given her approval to investigate sexual abuse allegations against Osgood. She didn’t know Wallace and Osgood have a history and are now enemies.

How could Mayflower descendant Osgood, owner of a newspaper and Pulitzer Prize winner with a wife and two children, be assaulting young women? Lurie knows the answer: “Money, and the power money gets you. He paid off the women he could, and the women who wouldn’t take the money weren’t believed.”

After celebrating her article’s publication, someone violently attacks Joan when she returns to her apartment. She’s too ashamed to call the police and realizes how ironic it is she’d never understood why the women she’d interviewed didn’t report their abuse. Now she knows. 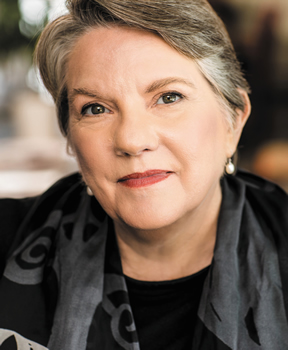 After the attack, Joan moves to the Refuge, an apartment building in Inwood, in far north Manhattan, which touts stellar security. The building had once been a refuge for fallen women in the early 20th century—a Magdalene laundry run by the Sisters of the Good Shepherd. When she meets 96-year-old Lillian Day—the woman who lives across the hall—she learns Lillian and her friend Rose were residents there almost 80 years before.

As Joan investigates other abuse allegations against Osgood for the book she’s writing, Osgood’s wife Melissa vows to prove her wrong. But what Melissa and Joan discover puts them in danger and will change their lives.

Chatting with The Big Thrill, Goodman shares that her inspiration for the novel was the ordeal experienced by her own mother, who suffered PTSD from a sexual assault.

“I knew my mother suffered from anxiety all my life—she slept with the light on, her hands shook, and she was very protective of me,” Goodman says. “I also knew she’d lived a traumatic life—her own mother had died when she was seventeen. She wasn’t able to finish high school, and all her brothers ended up in an orphanage, and, eventually, prison. It wasn’t until I was older that she told me she’d been sexually assaulted when she was 18. Still, I didn’t link that with her anxiety until I heard Dr. Christine Blasey Ford talk about the ‘sequelae,’ or aftermath, of being assaulted, and I recognized my mother’s symptoms.

“This realization made me think about how sexual assault has impacted many women’s lives, and the lives of all who care about them. I wanted to write something that would capture both the legacy of these untold stories and a modern story that addressed the #MeToo movement.” 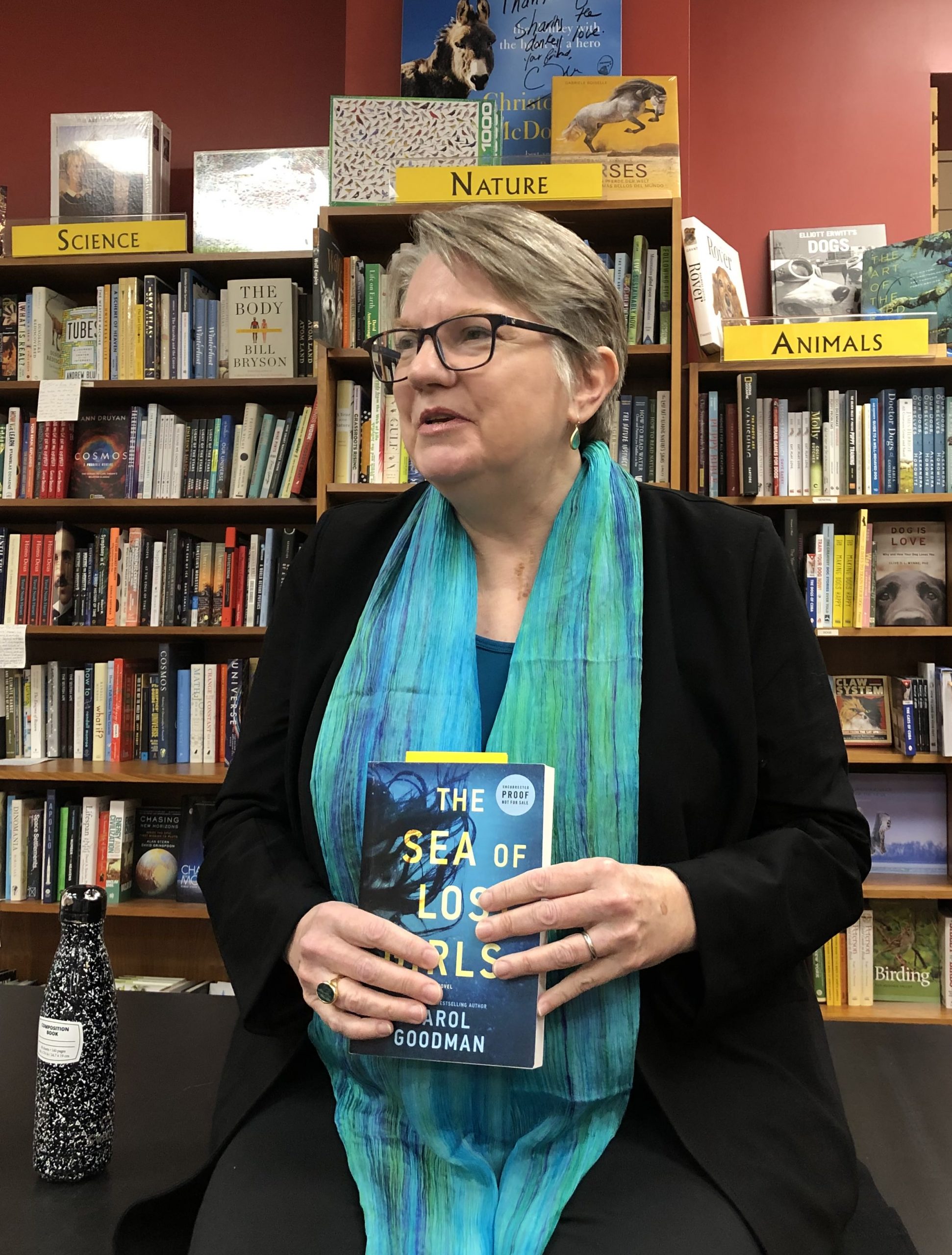 Goodman at a launch event for her 2020 thriller The Sea of Lost Girls at Oblong Books in Rhinebeck, NY, last March

Goodman is skilled at focusing on issues of social conscience in her novels. She realizes how important it is to write about trauma from sexual assault and the punishment meted out by institutions like the Magdalene laundries.

“There’s so much we’re only now beginning to understand about trauma, the legacy of abuse, and intergenerational trauma. I first started thinking about this when I researched the history of Indian Residential Schools for my Middle Grade novel, The Metropolitans. Carole Ross, a tribal leader of the St. Regis Mohawks, told me the legacy of the boarding schools still impacts many families because of how it fractured family life.

“I’d also watched movies and documentaries about the Magdalen laundries in Ireland, which imprisoned young women for their whole lives and separated them from their children. Unless we bring the history of these institutions to light, its victims and their families continue to suffer in silence. We must acknowledge how the trauma is still shaping those lives, and we must redress the injustices that caused the trauma.”

Goodman knows bringing secrets into the open helps heal the wounds of trauma.

“It’s crucial to acknowledge the source of the trauma. So often society doesn’t believe victims of assault, invalidating their experiences. Without this acknowledgment, victims can’t begin to heal.”

There’s a message Goodman would like readers to take away from THE STRANGER BEHIND YOU. 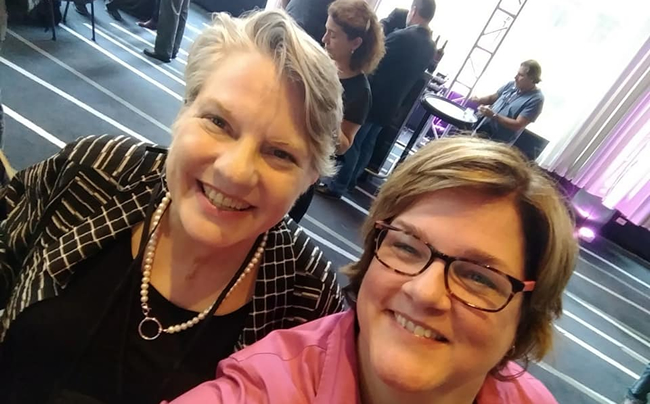 “We know so little about the people around us. They have histories and experiences we can’t fathom, experiences that still shape their behavior today. Our world, too, has been shaped by the everyday lives of people who aren’t always foremost in our history books and by events that don’t get the attention they should.

“I hope readers come away less hasty to pass judgment and more curious about the neglected stories. Most of all, I hope readers who have suffered trauma feel freer to tell their stories, and that we all listen better to each other.”

Goodman includes paranormal occurrences and magical realism in her novels because that’s what she loves to read herself.

“I love ghost stories. I love books firmly set in this world but suggest the possibilities of things we don’t understand. I especially love the way a ghost can represent the unresolved legacy of the past but also convey the love of someone who’s gone. In writing this book, I thought so much about my mother that I felt her presence beside me—that’s my favorite kind of ghost story.” 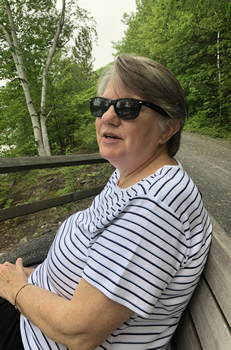 Goodman on the Ashokan Reservoir Trail in May

Goodman has advice for other writers, especially those who want to incorporate a message about social justice into their stories.

“Write the story that calls to you. This often comes from something that moves you, sometimes out of something that angers you, but it should always be something that deeply matters to you. Not only will this give your book a strong core, but it will give you something to do with all the pain, chaos, and beauty in the world.

“At the end of my creative writing classes, I give my students bookmarks with my favorite author quotes. One of the most powerful is from Toni Morrison: ‘If there’s a book that you want to read, but it hasn’t been written yet, then you must write it.’”

Goodman is already hard at work on her next novel.

“It’s about a group of friends who take refuge during a pandemic on an island off the coast of Maine. They must reckon with their own shared history, as well as the violent and mysterious history of the island itself, which includes a pre-colonial witch execution and the arrival of ‘fever ships’ from famine-stricken Ireland in 1848.”

What is there about Goodman her fans might not already know?

“I was a Latin major in college, I write my first drafts by hand in composition books, I drink a lot of tea, and I have a half-blind poodle named Connie.”