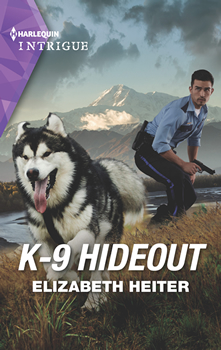 The story opens with protagonist Sabrina Jones enjoying the view from the window of her rented cabin. After two long years eschewing contact with family and friends to protect them from her stalker, she’s beginning to feel safe again and believes at long last, maybe she can have some semblance of a normal life.

The small town in Alaska where she now lives seems to be filled with people who are trying to escape their pasts. It’s the perfect place to begin anew—friendly and welcoming but also a good place to hide in plain sight.

However, when Sabrina discovers she may not be as safe as she thought, and a visit to the local police department becomes necessary, she is forced to trust again. Will officer Tate Emory and his canine partner, Sitka, actually be able to help and enable her to have the life she envisions?

Tate vows to find her stalker and give Sabrina back her life. Though attracted to her, he knows the skeletons in his own closet preclude any kind of romantic relationship. He believes he can ignore the attraction between them, apprehend the stalker that has chased Sabrina around the county, and still avoid drawing the attention of the dirty Boston cops he brought to justice five years before.

All bets are off when Sitka’s life is endangered, and Sabrina saves her.

Heiter does a masterful job of intertwining the characters’ life traumas and joys, making situations plausible but not tedious. In this exclusive interview with The Big Thrill, Heiter talks about her new book, gives insight into the writer’s perspective, and offers encouraging words to aspiring authors.

I love that Sitka, the canine character in K-9 HIDEOUT, is a rescue dog.  Your book will help people appreciate that pets adopted from a shelter can be intelligent and trained in addition to loving companions. With the caveat (in the novel) that they aren’t normally used by law enforcement, was there a special reason you chose to make Sitka an Alaskan malamute? Do you have any rescue pets?

Thank you! There are so many wonderful animals that need adopting, so I love having rescue dogs in my K-9 Alaska series. (Two other dogs in the series so far have also been rescue dogs.) As for making Sitka an Alaskan malamute, it just felt right to have a breed that was traditionally trained in the Arctic as a sled dog. Although it’s rare to see them as police dogs, they are great in cold weather and have been used by the military for cold-weather rescues. And although certain other breeds are very common for police dogs (like German shepherds or Malinois), police departments that don’t have the funding will commonly use shelter dogs and train them for police work. That’s something that has had great success!

Currently, I have one pet—an Amazon parrot who has been with me since childhood. She was actually returned to the bird breeder where we got her for some reason, which was very lucky for me! Growing up, I did have rescue pets—and I plan to again.

Having a stalker would be an emotionally charged scenario. You did a great job at capturing the angst and anger a victim would feel and the frustration law enforcement experiences. How did you do the research—was it all online, or were you able to find victims and law enforcement personnel willing to discuss the issue with you?

Stalking is a lot more common than people realize—one in six women will experience it in their lifetime, and nearly 70 percent of victims experience physical threats. When I developed Sabrina’s situation, I drew on research online and from talking with experts, but I also drew on my own experience. In college, I was stalked by someone I knew, who sent me scary letters and even broke into my dorm room and destroyed many of my belongings. (Luckily, I was not there at the time.) My experience is one that is unfortunately also common—police don’t always take it seriously. Even when they do, stalking (like other crimes that disproportionately impact women) often doesn’t result in enough legal action. Shedding some light on the crime and the challenges victims face was one of my goals when writing K-9 HIDEOUT.

What suggestions would you offer to aspiring authors?

I think perseverance and commitment to craft are two of the most important things an aspiring author should do, so it’s important to:

Where do you get the ideas for your books?

My ideas come from all kinds of places. Something I read in the news could spark a story, or a personal experience, or something that gets me curious and makes me begin researching. My debut book, about an FBI profiler tracking a serial killer who liked to bury his victims up to their heads in the woods, came from my interest in psychology and profiling. The start of my K-9 Alaska series came because my editor asked me if I wanted to write a book with a dog in it. And my Lawmen series books started with a title idea (which was ultimately changed). But, of course, the first spark is only the beginning. I spend a lot of time thinking about the “right” character for a story idea, and taking that initial spark and twisting and reshaping it until it can support an entire book.

I spend a lot of time at the beginning of the process—before I start drafting—conducting research. Generally, I start plotting and character work, then do minor research to validate any big sticking points. Then I continue working on my high-level plot and character details. Once those are mostly fleshed out, I dig into any important topics. Then I finish my outline and character sketches and return to deeper research. Once I feel confident that I have a good handle on the topics, I start drafting the book. Inevitably, I’ll do more research during the drafting process—and sometimes during editing as well. Accuracy is important to me; I think it makes a book stronger when someone who has experience with the topic you’re writing about can read it and feel it resonate.

How long does it take you to complete a novel?

We all know that almost any information we want can be found on the internet. That said, is there a personal reason why you chose the East Coast for a portion of both protagonists’ backstory? Do you have a special attachment to that side of America?

I actually chose the East Coast for both Tate and Sabrina’s hometowns to complicate the plot! Sabrina has been on the run from her stalker for two years. In order to escape her stalker—and eliminate the potential threat to the people she loves—she hasn’t spoken to friends or family in that long. But if the Desparre PD can help her eliminate the threat, she hopes to return home to New York. So it’s a complication to any possibility of a relationship with Tate, who loves Alaska. And for Tate, who’s hiding a secret past of his own, returning to Boston—or anywhere close, like New York—will never be an option for him because it could threaten his life and the lives of anyone he loves. That said, I do love both New York (where I’ve been many, many times over the years, for thriller conferences and vacations) and Boston.

Publishers Weekly bestselling author Elizabeth Heiter likes her suspense to feature strong heroines, chilling villains, psychological twists, and a little bit (or a lot!) of romance. Her research has taken her into the minds of serial killers, through murder investigations, and onto the FBI Academy’s shooting range. Her novels have been published in 14 countries and translated into eight languages; they’ve also been shortlisted for the HOLT Medallion, the Daphne Du Maurier award, the National Readers’ Choice award and the Booksellers’ Best award and won the RT Reviewers’ Choice award.