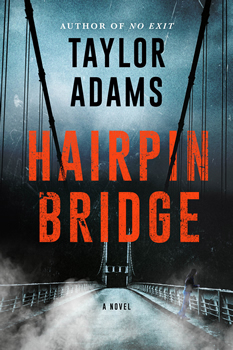 Taylor Adams’s new novel HAIRPIN BRIDGE is about a young woman determined to prove her twin sister’s suicide was really a murder—and to catch the police officer she thinks did it. But there’s more than meets the eye in this action-packed story—it also deals with processing loss and the difficulty in reconciling the truth with the memory we carry of a loved one.

The book is named after a bridge, but before fans set out to google it, Adams admits that it’s a fictional landmark. Mostly.

“One real bridge I did often reference is the Perrine Bridge in Idaho,” Adams says. “It was rebuilt a few decades back. It’s currently a very pretty-looking bridge, and also a popular base-jumping location, but pre-refurbishment, it used to look very different. As a setting for a confined thriller/mystery, there’s something eerie about an ancient forgotten bridge slowly cracking and decaying under the Montana sun.”

The location, as in the titular bridge, took some time to form, but Adams realized the story’s setting should be more about the tone and feeling rather than a detailed description of the bridge—nuts, bolts, and all.

“I went through a similar phase a few years back,” Adams says, “as I tried to find the perfect real-world example of the exact highway rest stop I’d visualized for my story. So I think I’ve learned to be a more confident storyteller with the details I choose to omit, because the setting’s most important purpose is to provide a physical and emotional context.”

Adams has always been curious about the concept of trying to solve a family murder. To further explore the idea, he paired it with a split narrative between the two twins, one alive and one dead. Lena is the twin set on revenge, while Cambry is the object of said revenge. The dual timeline is a difficult trick to pull off since both narratives need to be compelling, but Adams is able to sustain the momentum with a sense of rhyme or echo between the two.

Like No Exit before, HAIRPIN BRIDGE features three characteristics. The first one is a confined space, the second is a reduced list of characters, and the third is the brief time elapse from opening to end. Adams’s love of tight timeframes, a small cast of characters, and limited locations adds natural pressure to the story.

“I’ve always loved the focus and immediacy that this brings to a narrative,” he says. “When the story is essentially a single high-stakes situation, every win and loss feels exponentially more meaningful. And, as an added plus, it’s much harder for me as the writer to get lost in unnecessary subplots or distractions when the story’s central conflict is present in every scene.”

However, Adams likes to point out one fun difference between the two novels: in No Exit, Darby finds herself stranded with her antagonist by bad luck. But in HAIRPIN BRIDGE, Lena Nguyen has isolated herself with her enemy intentionally, because it’s part of her plan. In other words, Lena asked for what’s coming for her.

Parts of the story are told in the form of a blog, adding the feeling that the character is talking to the reader directly, sort of like Deadpool and Harley Quinn breaking the fourth wall in their films. Adams says he used this device to provide a direct line into Lena’s determination, grief, and even her dark sense of humor.

“Lena’s blog was a fun storytelling device that allowed her to keep a step ahead of her dangerous enemy (and, hopefully, readers!),” he says. “She was an interesting protagonist to write, because she’s deeply wounded but also ferociously intelligent. She’s always idolized her twin from afar, but she learns throughout the story that Cambry’s strengths and flaws are in her blood, too.”

Adams plants himself in the camp of “Planners” as a writer; however, he keeps himself open to veer off into unforeseen directions. He says that his outlines are full of meticulous details, but he’s not afraid to explore unexpected ideas. In his words, “You have to write with your gut sometimes.”

At the moment, Adams is busy writing his next thriller, and having tons of fun with it.

“This one is about a young woman who writes a negative online book review, and then discovers the author is a vengeful psychopath who comes after her,” he says. “It’s sort of a home-invasion thriller with a twist, and a fun way for me to write an antagonist who’s truly different from any I’ve tackled before. It takes a very specific personality type to be a writer, and I’ve always believed that could be utterly terrifying in a villain.”