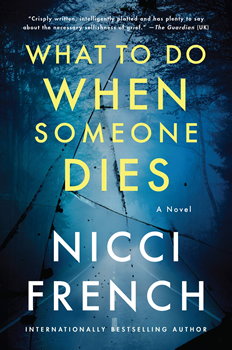 “Moments when your life changes: there will always be a before and an after, separated, perhaps, by a knock at the door. I had been interrupted.”

These are the opening lines in bestselling co-authors Nicci French’s new thriller, WHAT TO DO WHEN SOMEONE DIES.

Thirty-four-year-old Ellie Falkner is gobsmacked when she answers the door to find two police officers standing on her stoop. Her husband Greg has died in a car accident. And not only that, there was a woman in the car who died with him. But when she hears it, she’s sure “that can’t be true because it happens in a world meant for other people.”

Ellie is shocked at how drastically her life changes in a matter of minutes.

“Widow. The word almost made me laugh. It wasn’t a word for people like me. It was for old women with headscarves, pulling shopping baskets on wheels, women who had expected widowhood, had prepared for and accepted it.”

Not only is she a widow, but their friends and Greg’s coworkers pity her—everyone knows Greg died with another woman. And of course, everyone suspects he was having an affair. Even her. The knowledge of Greg’s betrayal taints Ellie’s grief.

The police believe the crash that killed Greg was just an accident, but Ellie can’t come to grips with his death until she’s sure. When could Greg have carried out an affair? He didn’t have time. Ellie reconstructs the last few months of Greg’s life to pinpoint any time unaccounted for. Then she does the same for Milena Livingstone, the woman who died with him. Where could their paths have crossed?

Ellie must find out if her husband was cheating and decides to investigate. “If I could just discover that Greg and that woman had been having an affair or that they hadn’t, I could start my new life as a real person.”

Ellie keeps what she discovers to herself. Her friends already pity her. She doesn’t need them thinking she’s lost her mind, imagining a newspaper headline, “Deranged widow runs amok.”

As she pieces together the last weeks of Greg’s life, the facts just don’t make sense. Ellie uncovers clues that tenuously connect Greg and Milena, but an affair between them seems unlikely. However, her pursuit of the truth uncovers secrets about other people in their lives that she never expected.

Ellie becomes convinced her husband wasn’t having an affair. She just has to prove it. She soon realizes something sinister is in play. Her digging has put her in danger. But danger from whom?

“This book had a very specific and strange inspiration,” French says. “Once, many years ago, we met a friend of ours and the friend’s secret lover. After they had left, we thought: what if, on their journey, their car crashed and they were killed? Nobody would know why these two apparent strangers had been together. That could be the basis for a story.”

Besides the thriller aspect of the story, French dives headfirst into exploring the intimacy of grief.

“There are certain times in life when we go mad. We had already written a novel, Killing Me Softly, about the madness of sexual passion. We thought it was interesting to write about a woman who has to investigate a murder while grieving for the murder victim.”

French also wanted to highlight how much we don’t know about each other, even in a marriage.

“Issues are always secondary in our stories. First, we want the reader to be gripped by the story and the characters. But stories don’t mean that much unless there is some other resonance. We’re always fascinated by how little we know, even about those we’re closest to. That’s why trust is so important and so difficult.”

French is a master at showcasing ordinary people—especially seemingly powerless women—in bizarre circumstances who must take investigation into their own hands. They prove not only to everyone else, but to themselves, that they’re very capable of navigating devastating circumstances.

“Ellie’s vulnerability and strength both come out of the terrible situation she finds herself in. She is faced with not just the death of her husband but the evidence that he had apparently cheated on her. She refuses to play the role of the passive, grieving widow, and decides to trust her husband even though that comes with terrible risks.”

Nicci French is the pseudonym for the writing team Nicci Gerrard and Sean French. Do their gender roles have any significance when writing their novels?

“Not in any conscious way. When we write together (which means writing different sections), we never divide the narrative in any planned way. We never arrange for Nicci to write the ‘feminine’ part of the story and Sean to write whatever the opposite of that is. A huge part of this book involved exploring Ellie’s rebellion against the role everyone else wants her to play: that of the passive, grieving woman. But it was something we both wrote.”

French shares some advice for other writers.

What about French’s next novel?

“We call our next novel The Unheard. A three-year-old girl shows her mother a drawing she’s made. It appears the girl has witnessed a murder. But there is no evidence of any such murder taking place. The girl is too young to answer questions in any reliable way. So what should the mother do?”