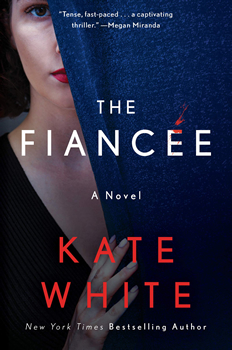 Kate White has spent a lot of time in the company of actors. First, in her former job as editor-in-chief of Cosmopolitan, and these days with her husband and daughter, both of whom are heavily involved in the world of theater.

These connections inspired, in part, White’s latest thriller, THE FIANCÉE, her seventh standalone thriller and perhaps her most engaging book to date—and that’s with an already high standard of excellence set by her previous 14 books.

THE FIANCÉE takes place in rural Pennsylvania, where struggling actor Summer, her husband Gabe, and his nine-year-old son plan to meet up with the rest of the family for their annual reunion. It seems like the perfect escape—until Gabe’s younger brother Nick shows up with his new fiancée, Hannah, who’s an actress as well.

Summer already feels like something isn’t quite right about Hannah—so when a family member is found dead, Summer is convinced there’s been foul play, and that Hannah is somehow involved. How far will Summer go to expose the truth?

As far as she needs to.

In this exclusive interview with The Big Thrill, White shares more about the inspiration for THE FIANCÉE, the secret to how she crafts her trademark twists and reveals, and what significant impact the current cicada invasion is having on her creativity—and her perspective on life.

I’m a tremendous fan of your Bailey Weggins mysteries, but there’s something freeing about your standalones, as though they allow you to play a bit more with character types. Would you agree?

I do! Bailey is very irreverent, and people tell me how much they like her. With my standalones, I’ve always stayed away from that kind of character, but I think I’m far enough away from the Bailey books that I could bring in more of those characteristics with a standalone character.

That brings us to Summer, the protagonist in THE FIANCÉE. A struggling actor who is both gutsy and self-doubting.

My daughter was a theater major and my husband—after many years as a TV news anchor—decided to go back to theater. I enjoyed tapping into their world with this book. I’ve seen a lot of what happens to people in that world—it takes a certain amount of gutsiness to be an actor, and it comes with an amount of self-doubt and self-loathing. Summer has a fairly loud inner critic, which comes with the territory of being an actor. I would often see a lot of that self-doubt in my job with Cosmopolitan. We would host events, and these people would sit next to me, nervous about giving a talk. I mean, they were practically in agony. When they’re playing a role in a movie they can lose themselves and their doubts. In real life, that’s harder.

I found it fascinating how you paired her with Hannah—the mysterious “fiancée”—also an actress, but not quite as struggling. A little more sure of herself.

Even though there’s a certain number of actors who will talk about their fears and self-doubts, you can meet a few female actors who don’t feel that to the same degree. I’ve met some of those women. They can be self-contained. Smug. Hannah made me think of a few women I’d met in that realm. Over the years, we’ve had a few actors over to our house and have had the chance to see that variation and how some actors deal with the nervousness of putting themselves out there. I wanted to capture some of that in this story.

Summer is suspicious of Hannah because she’s the odd woman out—the fiancée—marrying into the wealthy Keaton family. A few weeks ago, a Twitter thread discussed the prevalence of domestic suspense novels more often than not involving the rich or famous. Why do you think we’re drawn to this trope?

Family—and its inherent drama—is a central theme in this book, which is something many of us face in real life as well. Do you think the past year or so, with the pandemic, has heightened that drama?

I do think there could be more tension for some people because we’ve been living in such close proximity. Maybe we’re all stepping back right now, examining our relationships. I’ve thought a lot about this, and I think now is a good time to take a look at ourselves and ask ourselves, who don’t we want to be a part of our lives going forward? You have more time to assess situations and come up with a good strategy—you can give yourself the extra 15 seconds. If I come out of COVID-19 with anything it will be the willingness to give myself 15 seconds and ask: Is this important to me? I lost a year of my life—do I maybe want to do things differently?

One of the things happening in the Northeast right now is that the cicadas are coming out after 17 years. They’re here and they’re leaving their shells behind and they’re making such a racket. It’s only the beginning. They’re such a great symbol of renewal. I find it so magical. It’s breathtaking. And it could not be more fitting a metaphor for embracing life after the pandemic. It’s given me inspiration for the next book I do—I want to go further with the character and plot.

After every book, I always want to hope that it’s a bit better than the last. I usually start with the plot, the germ of an idea. The big challenge for me is that I tend to back into the character. One of my goals for the future is to keep developing my protagonist. I want to make sure I’m not shortchanging my character in my quest to develop plot. I love coming up with the twists and red herrings.

That’s evident! THE FIANCÉE is one hell of a twisty ride—with your trademark cliffhanger endings, which I know were inspired by your love of Nancy Drew books.

They had really great chapter endings! Almost every chapter in a Nancy Drew novel ends with, “Nancy, look out!” Reading those books made me really think about how I end my scenes so I can be sure I’m at a page-turning point.

I just turned in my next book, which is about a woman who is married to her second husband—she is a widow—and she begins to worry that there’s a connection between her new husband and her first husband’s death.