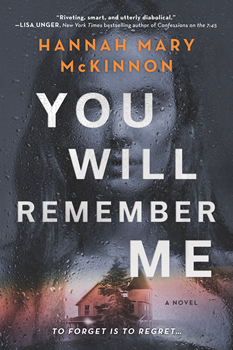 One man with amnesia and two women who love him play a deadly game of hide and seek in bestselling author Hannah Mary McKinnon’s latest thriller, YOU WILL REMEMBER ME.

A man regains consciousness on a beach with no memory of who he is or how he got there. The only clue about his identity is an old watch he’s wearing with the inscription To Brad. All my love, Rosalie x. on the back. Does this mean his name is Brad?

He makes his way to a local store and discovers he’s in Maryland. But when he sees a license plate from Maine, flashes of memory bombard him. He’s certain he must be from Maine and stows away in a trailer headed that way.

Meanwhile, Lily Reid’s fiancé, 33-year-old Jack Smith, has disappeared in Baltimore. He’d said he was going swimming at the beach the night before, but never returned. When the police investigate Jack’s disappearance, they tell Lily they can find no official records for the Jack Smith she knows. She now realizes that Jack left no digital footprint, but that doesn’t mean anything is awry. Or does it?

Maya Scott has been searching for her stepbrother, Asher Bennett, for the last two years. She’d found a note from him that said “Take care of yourself, Maya” written on the back of a receipt, with $1,000 stuffed into an envelope. She’s always desperately loved her brother, even more than a stepsister should—writing “Maya and Ash Forever” in her journal when she was a teen. Now, when she gets a call from a man who sounds just like her brother, she vows not to lose him again.

When Lily finds an old library book from a small town in Maine in Jack’s garage apartment, she tracks him there. How far will she have to go to trigger his memory? The consequences may be deadly.

McKinnon says she got the inspiration for the story from a news article.

“A few years ago, a man from Toronto vanished from a ski hill in Lake Placid while there on vacation and showed up six days later in Sacramento. He had amnesia and couldn’t remember much, including the cross-country trip he’d made as he’d hitchhiked across the US. Everything worked out for the man in the end, and he found his way home, but it made me wonder—what might have gone wrong? That was the genesis for YOU WILL REMEMBER ME.”

McKinnon is an expert at weaving the secrets of her characters throughout the plot.

“When I’m building my characters, I always ask myself what they’re hiding, what could cost them almost everything if they were found out. It’s one of my favorite parts of plotting my books. My novels are always stuffed full of people with secrets that might destroy them or each other.

“In YOU WILL REMEMBER ME, Jack’s past is catching up to him, but he can’t see it. Lily wanted to reinvent herself and find happiness, but that’s all unraveling as she pursues the truth, and Maya will ensure she meets her secret personal agenda, whatever the cost. While they want to discover the truth about one another, they don’t want to admit to their own. Put these three people together, and the conflict is explosive.”

Along with secrets, there are also lies. According to McKinnon, what makes a good liar is when they “get away with it.”

“As I’m creating my stories, I look at the way people behave in real life. Did they lie by omission, tell fibs or humdingers, and how were they found out? What did they do when they were exposed? Tell another lie to cover their tracks, or own up? It seems blending truth with lies is their best bet. It’s easier to remember the story you’ve concocted if you anchor it in reality.

“A friend once told me he always lies by omission, finding it easier to recall what he’d left out rather than something he’d created, and if called on it he could say, ‘Oh, didn’t I tell you that part? I must’ve forgotten.’ Not that I’m suggesting you do this, but your protagonist might.”

Readers will revel in the dark and scary conclusion to the story. Without spoilers, McKinnon explains why she gave us such a surprise ending.

“For YOU WILL REMEMBER ME, I had three endings in mind. When I pitched the book to my editor, I asked how dark I could go. She said, ‘As dark as you please.’ And so I did. I hope it makes the story more memorable. It seems I’m getting a reputation for dark endings. My pal Jenny Milchman calls me the ‘Queen of happily-never-after,’ and I’ll take it!

“I like stories with surprising, unsettling endings, not ambiguous because that can be frustrating, but where things don’t quite work out for everyone, and someone is left in a situation that may not be resolved. It makes me continue the story in my head and think about the characters. For example, I’m still wondering about Nick and Amy from Gone Girl. What happened to them? Where are they now? I hope people do that with my books.”

Does McKinnon have advice for other writers?

“The classic answer: read, read, and read some more. For example, Samantha Downing’s work has 100 percent impacted mine. My Lovely Wife, He Started It, and For Your Own Good are all astonishing. I couldn’t inhale the pages fast enough. Samantha is bold and fearless, and when I first read My Lovely Wife, I knew the feeling I had as I was gorging on her work was what I wanted to give my readers.

“Still, when fretting about pushing my characters too far, my editor insisted I shouldn’t hold back, that we could always lighten things if they were too intense, and I’ve done so ever since. I used to worry readers might think my evil characters and warped stories are somehow me, but I don’t think about that anymore. And nobody will ever know.”

Canadian McKinnon loves her 20-second commute to her laptop, where she’s been working on her next novel.

“Book six is done, bar a few lighter edits. It’s scheduled for release in spring 2022 and written from the antagonist’s point of view, which I’ve never done and thoroughly enjoyed,” she says. “It’s about Lucas, a man who hired a hitman via the dark web to kill his wife. A month later, Lucas receives a partial photograph of his deceased spouse in the mail. Who sent it? What do they know? And what do they want? I can’t wait to introduce you to my characters.

“In the meantime, I’m plotting book seven. It’s too early to give anything away, but I’m hugely excited.”