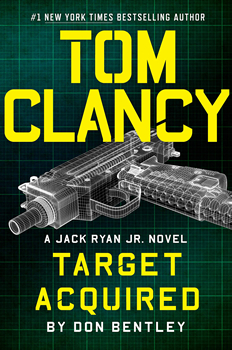 Fresh off his success as a solo author—his debut is up for an ITW award this year—Don Bentley sits behind the wheel of Tom Clancy’s Jack Ryan Jr. series with its latest installment, TARGET ACQUIRED. Bentley says the novel is a story about honor and duty and the lengths to which Jack Ryan Jr. is willing to go to satisfy both. It has everything Clancy fans love: exotic locales, edge-of-your-seat action sequences, military hardware galore, and most importantly, heart.

A quote that pops out from the page, attributed to President John P. Ryan, is, “Sometimes a good man has to be willing to pay the price for doing what’s right.” That sentiment, passed on to his son, is the driving force of the story.

Bentley says Patriot Games, and its opening sequence, is one of his favorite books, and while there was no intention to mimic it, there are some similarities at the beginning of TARGET ACQUIRED, in particular the fact that the presence of Jack Ryan at the wrong place—but at the right time to stop an assassination—sets the plot in motion.

“While my editor, Tom Colgan, made it clear he didn’t expect me to try to write like Tom Clancy, I wanted to remind myself about some of the things Clancy did that I loved as a reader,” Bentley says. “I actually have a page in my notebook that’s titled ‘Cool Things Clancy Does,’ and I tried to incorporate as many of those as possible. I’m a Clancy fan first and foremost, and I wanted to give folks like me something to love in TARGET ACQUIRED. Hopefully I succeeded.”

In that regard, Clancy used to poke fun at the way films depict operations, and Bentley carries on with this tradition. He says, “One of the challenges of writing in this genre is finding a way to allow readers to experience their favorite protagonists navigating larger than life scenarios while still keeping the story tethered to reality. There’s a passage that serves to remind readers that physical limitations do still exist in the Clancy Universe. But don’t tell that to Jack Ryan Junior!”

The fight scenes in TARGET ACQUIRED are described in detail, almost like a blow-by-blow sport commentator. It helps that Bentley has studied martial arts and combat training in the FBI and military.

“I don’t have a hard time visualizing fight scenes,” he says, “But that’s only part of the equation.  I think the key to writing great fight scenes is to provide enough detail to keep readers grounded in the action while not sacrificing pacing in the process. I would point to Brad Taylor and Lee Child as authors who write exceptional fight scenes while employing two very different techniques. Brad’s fight sequences tend to be much more technical, and I would guess they reflect his own combative experience. Lee’s on the other hand are much more sparse, but still incredibly visceral. I keep these two talented writers in mind when I’m crafting my fight scenes.”

And while on the topic of coordination, there are several authors in the Tom Clancy roster who have access to the same pool of characters. Tom Colgan, the series editor, plays an important role as gatekeeper, but there is also a degree of collaboration that the authors must achieve.

“Coming into the Clancy franchise as a writer is extremely daunting, both because of the reverence I feel for Tom Clancy and the huge respect I have for the other series writers like Marc Cameron, Mark Greaney, and Mike Maden. I couldn’t ask for better teammates,” Bentley says. “The Clancy Universe has a delineation between Jack Ryan Senior and Jack Ryan Junior in that there is a book series for each character. Since TARGET ACQUIRED is a Jack Ryan Junior novel, my focus was on him, which was just fine with me. Since this was my first book in the Clancyverse, I wanted to really zoom in on Jack Ryan Junior and understand what makes him tick.”

TARGET ACQUIRED is set in one of the author’s favorite cities in the world. He’s visited on two occasions, and he’s glad he was able to make the Israeli people and the city of Tel Aviv central to the story. The city is not in a state of constant alert, but Israel remains a tiny country surrounded by capable enemies.

“In the first four months of 2021, almost 50 rockets were launched against Israel, including 36 fired on April 23rd,” Bentley says. “The Iron Dome interceptor system has been a game changer, but the danger posed by rocket attacks has not been completely mitigated by any stretch of the imagination. For instance, in March 2019, a rocket hit a house in Tel Aviv, injuring seven people.”

Getting ready to write in this series was both incredibly humbling and extremely daunting.

“When my friend Joshua Hood was asked to take over part of the Robert Ludlum series, he likened it to someone tossing you the keys to an expensive sports car,” Bentley says. “You want to take it for a spin and put it through its paces, but you also want to return it to its owner after the drive with no new dings or dents! The Clancy fans are loyal and supportive of series writers, but they also rightfully have incredibly high standards. With that in mind, I really wanted to nail my first book in the series. I put a ton of thought and time into crafting a story designed to push Jack Ryan Junior to his absolute physical and mental limits while still staying true to the things Clancy readers love about the Clancy Universe.”

In fact, the climax of TARGET ACQUIRED is a complex and audacious sequence that Bentley had to go back and forth on until he was satisfied. Still, he was nervous when he finally sent the manuscript to his editor.

“I knew I was on to something when one of his editorial comments was ‘You’re a maniac!’  Best feedback I’ve ever received!” Bentley says.

Fans of Bentley’s Matt Drake series need not worry—he’s currently writing the third installment that will be published in May 2022.

“After that,” he says, “I’ll either begin work on the next Jack Ryan Junior book or start writing Matt Drake #4. Either way I’m incredibly honored to be able tell the stories that I love.”