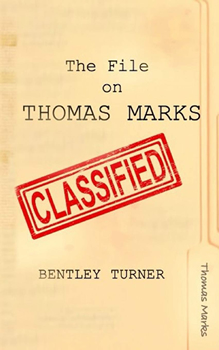 Thomas Marks, a young, intelligent man, admits to being with two women just before they were murdered, but he claims to be innocent. Investigating detectives don’t believe him because none of the evidence corroborates his story nor confirms the guilt of anyone else. When another suspect finally surfaces, Thomas thinks he’s in the clear, but appearances can’t always be trusted. Will an arrest stick?

The Big Thrill caught up with author Bentley Turner to discuss his recent novel, THE FILE ON THOMAS MARKS:

The setting came first primarily because I knew where the story needed to occur. The major suspect came next.

The biggest challenge was making certain specific information mentioned by one or two characters was accurate and factual.

The biggest opportunity? Doing research so information was accurate and factual.

THE FILE ON THOMAS MARKS is a mystery or police procedural that features an unusual leading suspect that is young and intelligent but also naïve, especially when it comes to understanding the law. In addition, the novel leads readers to believe that one or more characters are involved in the occult.

Is a member of a mysterious club responsible for murdering two or three women?

I have not necessarily been influenced by any particular writer or book primarily because I am an avid reader. Although THE FILE ON THOMAS MARKS is a mystery, I do not limit my reading to just mysteries. In fact, I read various genres by numerous writers.

How long did it take you to write this book?

Bentley Turner, a pseudonym, has written several short stories and numerous poems that have been published in literary journals and anthologies. The File on Thomas Marks, a mystery, will be published by Global Publishing Group June 1st. “The Prize Winners and Other Stories,” a collection that includes several previously published short stories, will be published later this year.

To learn more about the author and his work, please visit him on Facebook.