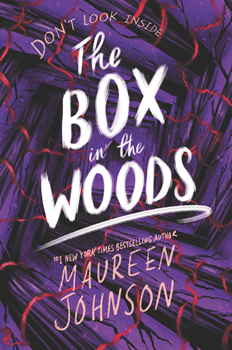 When the last novel in New York Times bestselling author Maureen Johnson’s Truly Devious trilogy hit shelves in 2019, fans despaired that this would mean the end of intrepid student detective Stevie Bell—the final book in the series had not only wrapped up the case, but also the school year.

But what readers didn’t know is that Johnson was far from finished with Stevie—and the sardonic sleuth makes a triumphant return in THE BOX IN THE WOODS, a gripping spinoff installment that takes Stevie and her friends from Ellingham Academy to…summer camp, of course.

Set at an old-fashioned sleepaway summer camp and unfurling in two timelines—the 1970s and the present day—Stevie’s curiosity is piqued when she learns that the campground, formerly known as Camp Wonder Falls, is the site of the notorious and gruesome murders of four camp counselors in 1978.

The new owner wants to make a true crime show about the killings—known as “The Box in the Woods Murders” because of how the bodies were found—and invites Stevie to come under the guise of a camp counselor to help figure out what happened and maybe solve the case. Thankfully, it’s not an opportunity Stevie can pass up.

In her first interview with The Big Thrill, Johnson divulges one of her favorite camp memories, digs deeper into what inspired THE BOX IN THE WOODS, and teases what might be up next for Stevie Bell.

Stevie is obviously a brilliant character, but what drew you back to her? Did you think you were done after the trilogy?

I love a detective. I love the moment when the new case comes along. So I wanted to make a detective who could go on with her mystery career. I planned for it. I thought about types of locations and crimes I wanted to do next, and also what period. The story grew fairly naturally from there. There are hints of several true crime cases in there as well.

Why the summer camp setting, aside from it being a perfect and creepy place for “murder”?

There were a number of elements that came together and made it the natural choice. The Hand on the Wall ends with the school year, so I knew I likely wanted something that happened over the summer. I also wanted somewhere I could bring the characters back together. I also felt like the ’70s was the next historical period I wanted to work with for the cold case. All of those things add up to camp. I didn’t have to think about it very long. Camp was the right setting. Murder, remote locations, serial killers…that’s camp for you.

Have you had a memorable summer camp experience?

I never went to sleepover camp. I went to day camp, though. Like Nate, I enjoyed the cooler indoor spaces—and like Janelle, I liked the areas where they let you make things. I tried my best to avoid having to play kickball in the blazing sun and things like that. I do have a vivid memory of a roller skating dance routine that I worked on for what felt like weeks and was probably two days. We did sleep over in tents for one night as a special event, and during that event we had a sandcastle-building contest in the sandboxes. We all took this very seriously and worked hard all afternoon as a group. Then one of the girls in our bunk—she had some issues, I don’t know what they were—came and kicked it down for fun. Being me, I got up and yelled at her for this. Being her, she knocked me down, kicked me repeatedly, and then grabbed my hair and used it to drag me across the lawn, knocking over three tents in the process. I remember being furiously angry the whole time and kept thinking, “I JUST NEED TO GRAB HER LEG, GET THE LEG.” I never got the leg. The counselors dove in and got her off of me. So I was only there for one night, but there was literal hair-pulling drama. (And I was fine.)

The YA market has changed over the years—maybe grittier, bolder—and I feel that’s reflected in THE BOX IN THE WOODS with its darker storyline. How did the changes in the genre impact you as you were plotting and writing this book?

I’m not sure it has changed so much? There’s more technical detail, maybe, which is a true crime thing. People always wrote and read dark YA, even if it wasn’t called that at the time. If you go back and read, say, Killing Mr. Griffin, which was published in 1978—that’s about a group of high school students who kidnap their English teacher for fun and accidentally kill him. All of Lois Duncan’s books are intense—but that one always terrified me. And I’m of the belief that V. C. Andrews was YA. You can’t convince me otherwise.

The dual timelines are so compelling! Was there a timeline that was easier or more fun to write?

I love writing the historical parts. I tend to go for periods I have a deep feeling for, and the ’70s is one of those. The structure wasn’t difficult to do—moving the perspective back and forth is interesting, and it makes you focus on the crime and the details.

Speaking of fun, THE BOX IN THE WOODS is infused with great humor and laugh-out-loud moments. What is the role of humor in thriller writing, in your opinion?

I don’t know how to write any other way. The books sound like me. If that’s your voice and you want to write thrillers, do it! You do have to be judicious in the timing. You want to have contrast in the tense moments without letting all of the air out of the balloon.

The Big Thrill is as much for aspiring writers as it is for readers, and I think you could write a master class on red herrings, reveals, and twists. Are you a plotter or a pantser? What advice would you give to mystery writers who want to up their game or are just starting out?

The mysteries are plotted out. I don’t do any writing until I know the why, how, and who, until I’ve worked out the timelines and all the mechanics. Mystery plots are built around the clockwork of their crimes, and it’s essential to know who was where, why everyone did what they did, who could see what—you get the idea. I very much think of them as clockworks that throw off sparks and flashes. That’s how I do it, but everyone should write their mystery the way that feels right to them.

THE BOX IN THE WOODS is touted as a standalone, but I’m hopeful it isn’t the end of Stevie. Any plans to continue Stevie’s adventures? Regardless, what can you share about what you’re working on next?

Stevie will be back! I’m already at work on her next case.