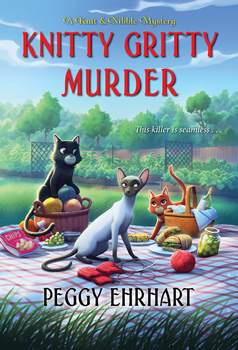 Most times of the year, the tight-knit community gardens in quaint Arborville, New Jersey, overflow with seasonal vegetables and herbs. But who planted the dead body? Farm-to-table enthusiast Jenny Miller had a cookbook in the works when she was suddenly found strangled by a circular knitting needle in her own plot. Now, the pressure is on amateur sleuth and founder of the town’s knitting club, Pamela Paterson, and her neighbor and fellow knitter, Bettina Fraser, as they weave together clues in search of the person who kept Jenny’s renowned heirloom tomato plants–and budding career–from growing. With suspects and victims cropping up like weeds, it’ll take a whole lot more than green thumbs and creative minds this spring to entangle the crafty culprit.

Character and setting. The book is #7 in a series involving the same town and the same characters.

Jane Austen, especially Emma. It’s a mystery–who’s really in love with whom?–and all the clues are there but well-hidden.

Peggy Ehrhart is a former English professor with a doctorate in Medieval Literature. Her Maxx Maxwell mysteries, Sweet Man Is Gone (2008) and Got No Friend Anyhow (2011), were published by Five Star/Gale/Cengage and feature a blues-singer sleuth.

Peggy is currently writing the Knit & Nibble mysteries for Kensington. Her amateur sleuth, Pamela Paterson, is the founder and mainstay of the Arborville, New Jersey, knitting club, nicknamed Knit and Nibble. Knit & Nibble #7, KNITTY GRITTY MURDER, appeared in April 2021. Knit & Nibble #8, Death of a Knit Wit, will appear in March 2022. Peggy will also have a Knit & Nibble novella in the 2022 Kensington Christmas anthology.