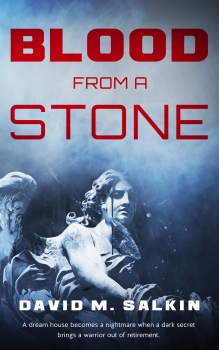 A dream house to share with his love becomes a nightmare when the discovery of an old diary reveals a dark secret that brings a wounded warrior out of retirement.

Cory Walker is forced to face off against Congressman Earl Stone, who may very well be the next President of the United States. Stone wants his family secrets to stay buried, and Walker now stands between him and the White House.

David M. Salkin recently spent some time with The Big Thrill discussing his latest thriller, BLOOD FROM A STONE:

If readers feel like they just watched the movie in my head, I’ll be happy. It’s a cinematic thriller, with a strong sense of place and realistic characters that will hopefully bring you to Harkers Island and have you connect with the characters. 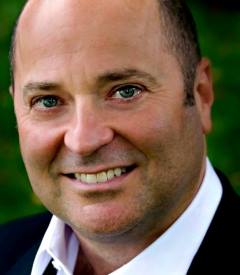 I think BLOOD FROM A STONE is unique in many aspects, but perhaps most obviously in its sense of place. Harkers Island is almost a character in the story, the way the swamp was in True Detective (season one). The isolated island has its own dialect of English not heard elsewhere in the world. Known as High Tider (which sounds like hoi toider when spoken by the old timers), this interesting dialect definitely transports the reader, and perhaps also offers a sense of isolation from the rest of the world—so maybe help isn’t on the way so fast.

The research into the dialect and the island’s history was certainly fun. The main character, Cory Walker, is also a great chef and oenophile (like the author), and I found myself thinking about new recipes and wine pairings as I was writing. That was a new element in storytelling for me.

Cory Walker represents the American Wounded Warrior to me. He’s a regular guy, just trying to get over his combat experience and enjoy his new life. I’ve worked with veterans for almost 30 years, and they’ve shared so many amazing stories with me. I think Cory is a three-dimensional character, and I’ve tried my best not to make him some cliched “bad-ass.” He has a sense of humor, he loves wine and cooking, and he’s also recovering from injuries, both physical and emotional. He’s dealing with PTSD, the way so many combat veterans do, and I think he offers a peek into his head, while keeping it subtle in the storyline. That said, he’s former Special Forces, and not someone to be messed with.

Nelson DeMille is a long-time favorite of mine. A little secret… Cory Walker was named for DeMille’s character John Cory. Cory is sarcastic and often quite funny, even though he is a highly trained Special Forces soldier. Other favorites include Michael Crichton (I’ve had two separate, unrelated editors tell me I remind them of Crichton, which made my day both times). Lee Child, Ken Follette, and Robert Crais round out the thriller authors, but I also have to include John Milton, Rudyard Kipling, and James Mitchener as amazing, classic authors.

International award-winning author David M. Salkin has been entertaining readers since 2005. His brand of thrillers includes military-espionage, horror, and crime. Salkin has appeared around the country, including three times as a panelist at New York City’s Thrillerfest and also at Books in the Basin in Midland and Odessa, Texas. Dave enjoys speaking to book clubs and groups about writing and has appeared on television, radio, and various print media.

David served as an elected official in Freehold Township for twenty-five years (mayor, deputy mayor, and township committeeman) and was inducted into the New Jersey Elected Officials Hall of Fame in 2019. He is a 1988 graduate of Rutgers College with a BA in English Literature. When not working or writing, Dave prefers to be scuba diving or traveling. He’s a master diver, as well as a pretty good chef and wine aficionado. David speaks three languages fluently–English, sarcasm and profanity.

David is an associate member of the Philip A Reynolds Detachment of the Marine Corps League, and board member of the Veterans Community Alliance.