Ripped from the Headlines 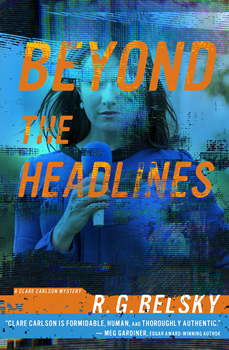 The fourth Clare Carlson book by R. G. Belsky follows the classic thriller structure, with a murder right off the bat. BEYOND THE HEADLINES is a celebrity crime story about a woman famous for being famous who is accused of murdering her billionaire husband. TV journalist Clare Carlson gets an exclusive jailhouse interview with the woman and believes Laurie Bateman didn’t kill Charles Hollister. And as Clare digs deeper into the tangled case, she uncovers long-buried secrets about both Bateman and her dead husband, stretching all the way back to the Vietnam War a half century ago.

Belsky reveals that there were two main inspirations for this story. The first, and the most obvious, is the O. J. Simpson case where Belsky spent several years of his career covering the murders of Nicole Brown Simpson and Ron Goldman, and the subsequent trial that was dubbed the “the trial of the century.”

“I decided to write my own version of a celebrity crime case like that,” he says. “And the public reaction to a well-known figure—in this case, actress and fashion model Laurie Bateman—being accused of such a heinous crime. Race played a big part in the O. J. case. With Laurie Bateman, it is women’s rights—particularly the burgeoning #MeToo movement—which plays a significant role in determining her guilt or innocence.” 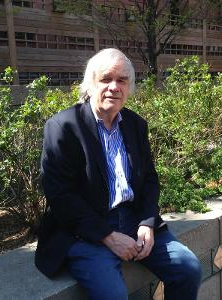 As a veteran of the Vietnam War where Belsky served in the late ’60s, the appeal of writing a novel about Vietnam has been ever present.

“This one isn’t it,” Belsky clarifies, “but I do draw on many of my own experiences during the war to portray the background of Laurie Bateman’s murdered husband. For example, I worked in US Army intelligence, just like the Charles Hollister character did after being drafted back then.”

The connections abound. For example, Laurie Bateman’s original name is Pham Van Kieu, and she was born in Vietnam.

“I took a lot of time to make sure I got everything right on the Vietnamese name for her,” Belsky says. “Kieu means ‘pretty’ in Vietnamese lore. So it seemed like the perfect choice for her. Her family name of Pham was one of the most common surnames in Vietnam—sort of like Jones or Smith. When she and her family flee Vietnam at the end of the war to come to the US, her mother changes the little girl’s name to Laurie in order to make her seem more American, especially once she starts to push her into a career as a child star in show business. Later, the mother marries a Hollywood producer named Marvin Bateman, so the girl becomes Laurie Bateman.” 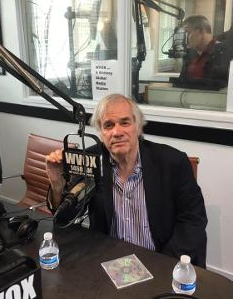 Belsky makes an appearance on a radio show in Westchester County, NY, to promote his 2019 Clare Carlson thriller Below the Fold.

While Belsky doesn’t have to spend much time doing research when he writes about newsrooms and New York City—topics he already knows a lot about—he needed to explore the Vietnam aspect of the tale, in particular what life was like for young Vietnamese men during the Vietnam War in the ’60s.

“That wasn’t easy to do; even experts at some top schools with Asian departments didn’t know a lot of those details,” Belsky says. “Finally, I was able to talk to a few Vietnam experts, including one who had grown up in Saigon during the war. So my accounts of what was going on back then—believe it or not, Vietnamese young men were staying out of the draft by going to college, just like in the US—are pretty fact-based.”

The Clare Carlson series has featured a consistent cast of main characters: Clare’s best friend, Janet Wood, her boss, Jack Faron, and the various people at the TV station. Belsky doesn’t worry about keeping the characters particularly fresh or relevant. 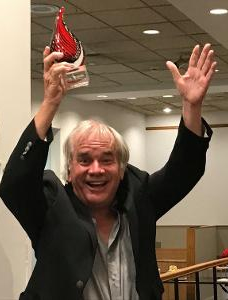 Belsky at the 2019 Deadly Ink Mystery Conference, just after winning the David Award for Best Mystery of 2018 for the Clare Carlson series launch Yesterday’s News.

“I kind of always like the Larry David/Jerry Seinfeld approach to the Seinfeld show,” he says, “Which was: No hugging and no learning. Nobody grows, nothing changes and, by the next episode, we’ve moved on. I suppose Clare has grown and changed a bit since the first book, but hopefully not too much!”

Besides the crime itself, Clare—as usual—is dealing with a lot of issues in her personal life. She has a big job offer that would require her to leave New York and Channel 10 to move to Los Angeles; her love life is a mess, as she juggles a lot of men and relationships—none of them very successfully; and she’s faced with medical issues, not just for her but also affecting her daughter and granddaughter with whom she’s recently reunited. This is all happening amid the Christmas holidays, which makes it even more stressful. And yet, BEYOND THE HEADLINES is more a straight-up mystery than the previous books in the series.

“If that’s true, it certainly wasn’t intentional,” Belsky says. “I didn’t even realize that before. One thing that is different is there are actually two mysteries in this book—one involving the famous woman accused of murdering her husband, and another about long-ago secret events that happened in Vietnam. But I always try to balance off the straight mystery aspect with plenty on Clare’s muddled personal life too. I believe that’s still the case in BEYOND THE HEADLINES.” 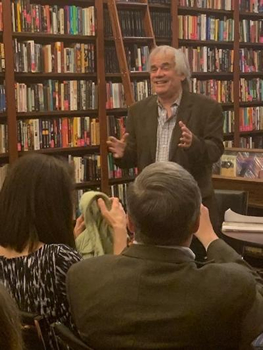 Belsky at the Mysterious Bookshop in NYC, where the launch party for Below the Fold was held in May 2019.

Belsky keeps himself busy and also writes novels under the pen name of Dana Perry. The latest one—Her Ocean Grave, scheduled for release in June—is about a former NYPD homicide detective named Abby Pearce who now solves crimes in a small town on Martha’s Vineyard.

He reveals that the most often-asked question is who the Clare Carlson character is based on and if he’d met real-life versions of her.

“The answer is yes, I worked with many of them,” he says. “Clare is a compilation of many wonderful, fascinating journalists—both women and men—that I worked in newsrooms with during my years with the media in New York City. Women and men who live to break the big story every day, who are passionate about being journalists, who are smart and funny and filled with integrity. Let’s just say I’ve known a lot of Clare Carlsons in my life!”