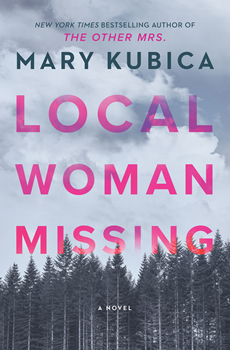 When a person goes “missing,” we’re left with anxiety-inducing uncertainty—why did they leave? Did someone take them? Are they alive? In need of help? In some ways, “missing” is worse than death, because the questions remain unanswered, sometimes indefinitely, and the intense feelings that come with the finality of death continue to build with little hope for release.

The terror begins with Shelby Tebow, the first woman to vanish from their normally peaceful community. Soon after, Meredith Dickey and her six-year-old daughter, Delilah, disappear too. Fearing that the cases are linked, the townspeople launch an extensive search for the missing women that ultimately leads to a dead end. The case goes cold.

But now, 11 years later, Delilah returns, leaving the town reeling and filled with more questions. Where has she been? What happened all that time ago? And perhaps most importantly, who is she? Delilah is not the same person the town remembers, and it’s not just that she’s older. There’s something more ominous at play here, something that will keep you turning pages right up to the novel’s chilling end.

In this exclusive interview with The Big Thrill, one of the genre’s masters of domestic suspense shares insight into her writing process and gives us a glimpse of what Kubica fans can look forward to in the coming months. Spoiler alert: you’re going to love it.

Your books always gut me in the best way, but this one feels different somehow—even more powerful. Did you have a different feeling while writing it? Did you feel more emotionally connected?

I almost always feel a deep emotional connection to my characters, though there are some that grab me more than others. The narrators in LOCAL WOMAN MISSING are unique in that I felt equally connected to all of them—Delilah, Leo, Kate, and Meredith. I can’t pick a favorite. I felt truly wrapped up in their lives and in their stories as I was writing and found myself thinking about them even when I wasn’t writing. Each is dealing with incredible hardship. They’re likeable characters (in my biased opinion) and quite relatable; I think this makes us, as readers, more drawn to them. They’re not so different than any of us.

LOCAL WOMAN MISSING is uniquely structured in that there are a number of POVs, some reliable, some not, and we leap back and forth in time. Ultimately this ratchets up the suspense—which is very on-brand for one of the best suspense writers in the genre. What factors contribute to how a novel is structured for you?

All of my novels have been structured similarly, with multiple narrators and, often, a non-linear timeline. I love telling my novels from various points of view because I think each perspective adds something new that the others can’t or don’t provide. Different narrators are sometimes privy to information that others aren’t, or they see a person or event in a different light. As for the non-linear timeline, it adds to the suspense because the reader gets a preview of things that may happen later, without getting the whole story. It (hopefully) piques their interest. When I begin a new novel, the first question I ask myself is: who can tell this story best and why?

Speaking of suspense, there are some incredibly satisfying twists in LOCAL WOMAN MISSING. How much of the plot do you know when you start writing? Are the twists as shocking to you, the writer, as they are to the reader?

The twists often surprise me! I start my novels with some developing mystery—in the case of LOCAL WOMAN MISSING, it was that a girl, Delilah Dickey, missing for 11 years, was suddenly back. I had no idea how the story would unfold from there. I write one narrator at a time, finishing his or her narrative in its entirety before picking up with another. I started this novel with Kate and, as I wrote her perspective, I learned a lot about the characters and the bigger mystery that there might be a serial kidnapper on the loose. One of my favorite parts of writing is when I have that epiphany of what the twist will be and how all these seemingly unrelated events will ultimately come together in the end. It’s so satisfying!

The characters are so well developed, it’s hard to pick a favorite, but for me, Leo was a standout. From a technical standpoint, second person POV is HARD, and you nailed it. I’d love to know more about what inspired that choice and his character overall.

Voice is important to me and, with multiple first person perspectives, I want to be sure that each is truly unique. I had never written in second person point of view before but decided to give it a try to make Leo stand out. I actually quite liked it! Leo’s narrative becomes something personal between him and his sister Delilah, that we as the reader get to observe. As for what inspired his character, on the news, when people go missing, their story often ends with their return (assuming they do return). With Leo, I wanted to dig deeper and discover what it might be like for the families of the missing and what that reintegration into society looks like, especially for a boy who has no memory of ever having a sister.

Writing in multiple POVs means juggling a lot of voices in your head. Was there a character you resonated with more when it came to writing? Whose POV was the most challenging?

All of these characters resonated with me, but Meredith was probably the one I most related to—a mother trying to raise and support her family. As for the POV that was the most challenging, I’d have to say Delilah, who we hear directly from at the beginning of the novel. When we hear from her, she’s being held captive and is plotting her escape. She’s been through a terrible ordeal, having been held prisoner and subject to physical and mental abuse. This, for me, as a writer, was emotionally eviscerating, and I had to be careful to provide enough detail for readers to also be emotionally invested, but not too many details that it might turn readers away. It was a balancing act.

LOCAL WOMAN MISSING is set in a small town—what is the allure of small-town settings?

Small towns tend to be idyllic. There’s the sense that everyone knows everybody and that you are theoretically safe. I love to turn that on end and make readers wonder how well you can ever really know the people closest to you and also what evil lurks in these seemingly picture-perfect neighborhoods and towns.

LOCAL WOMAN MISSING is your seventh book—congratulations! How would you say your writing process has changed since your first publication, The Good Girl?

My process has not changed much over the years. The biggest difference is that I know what to expect. I’m well versed in the process of publishing a book, and I know that as a writer there will be highs and lows—days the words flow, and days I can’t string together a complete sentence to save my life. Working with an editor has also provided great insight into my strengths and weaknesses as an author, so I approach my novels with an eye toward these things, which has helped streamline revisions!

Several of your books have been optioned for TV or film—not surprising given the absolute visceral nature of your writing. I know things have slowed because of the pandemic and Hollywood is generally slow in nature, but is there any updated news you can share about any of those projects?

You are right that things can be slow-moving! The Good Girl, The Other Mrs., and LOCAL WOMAN MISSING have all been optioned for film. Grey Matter Productions plans on turning The Good Girl into a limited TV series and has just attached an actress to the project. (I can’t say who yet, but soon!) The Other Mrs. will be made into a feature film by Netflix; Jack Thorne wrote the screenplay, and they are currently looking for a director for the project. And last but not least, Black Bear Pictures is in the process of finding a screenwriter for LOCAL WOMAN MISSING. All of this is beyond my wildest dreams!

What are you able to share about your next project?

I’m writing, admittedly slowly. COVID has not been great for my creativity, but writing has always been a source of comfort for me, an escape. It’s helped ease the anxiety of the last year. Another book is in the works. I just don’t have much to share about it yet!