Making Room in a Crowd 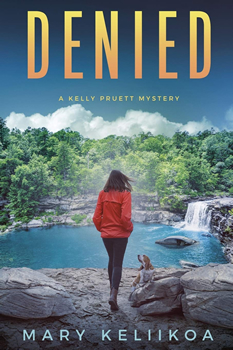 In a genre saturated with private eyes, award-nominated author Mary Keliikoa knew she needed to make her character different if she wanted her to stand out.

Step one was to make Kelly Pruett a single mom. Her daughter, Mitz, is deaf, adding another layer of complexity. Keliikoa was also careful not to give Pruett any addictions. Sure, she comes with emotional baggage—who doesn’t?—but you won’t find Pruett drowning her sorrows in a bottle of whiskey.

“That wasn’t even an option when I made her a mom,” Keliikoa says. “A lot of what Kelly does, who she is, is because she wants to be an inspiration to her daughter. Society has already made a lot of assumptions about what Mitz can accomplish, and Kelly doesn’t want her daughter to feel like there’s anything she can’t do—just as she doesn’t want anyone to think there’s anything she can’t do as a PI because she’s a female and a mother.”

Keliikoa didn’t want Pruett to be a former cop, either. In fact, she didn’t want her to have any previous career that seemed like a logical path into private investigation. Instead, she grew up around her father’s agency, watching him take on tough cases—kind of like Veronica Mars.

As a result, Pruett is tough—maybe too tough, her emotional walls in part the result of losing her own mother at the tender age of 14. Instead of grieving, she had to stay strong for her father.

“Her arc is really to become softer in some ways,” Keliikoa says. “Part of her growth is to lower those walls.”

Which is where we find her in DENIED, book two in Keliikoa’s Lefty and Agatha-nominated PI Kelly Pruett Mystery Series.

Derailed introduced us to a somewhat reluctant sleuth, and Pruett is still on the fence about following in her father’s footsteps at the start of DENIED, when she’s lured onto another case—a former classmate’s father has gone missing in what appears to be a tragic accident. But the deeper she gets into the investigation, Pruett is forced to play a dangerous game of chance with a killer who is willing to gamble everything to win.

Pruett can’t help but put her life on the line—years of living in a somewhat dysfunctional family have her yearning for a happy family ending, even if it isn’t hers. This is a theme that carries throughout much of Keliikoa’s work, partially born from her own family dynamics.

“I think there’s that myth of the perfect family that I’m always looking for in my books,” she says, “but I also realize that what the world sees is not always representative of what’s really going on. My own family was fractured on the inside, but that’s not how everyone on the outside saw us.”

Those kinds of internal conflicts—Pruett’s complicated relationship with her father, helping her daughter navigate life’s obstacles—create the backdrop for the mysteries Pruett is tasked with solving, but they also help to flesh out the character traits that keep readers coming back for more.

Some of those traits are borrowed from real life—Pruett and her creator share a love of coffee and the tenacity to “get the job done”—but Keliikoa also relies on her past work experience and extensive research to help authenticate the stories.

“I spent 18 years in the legal field as a secretary, and I would meet PIs,” she says, though she admits that in all her years, not a single female investigator walked through her doors. “I learned a lot about how to gather information from them, as well as some of the other skills Kelly would need.”

Keliikoa also studied the genre. Mary Higgins Clark was her gateway author, and from there, she binged on everything she could get her hands on—books by Sara Paretsky, Sue Grafton, and Laura Lippman, to name a few.

To flesh out and understand the societal limitations of Mitz’s character, Keliikoa consulted with a nurse who worked with deaf children. That excellent and thorough guidance was complemented by Keliikoa’s lifelong fascination with sign language.

Once the character work was done, or at least initiated, Keliikoa allowed them to guide her through the story. She’s mostly a pantser, knowing only a few details about a book when she starts writing. In the case of the Kelly Pruett mysteries, it’s usually the end.

“I know she’s going to solve the case,” she says. “I start with a crime, and get writing. I’ve tried different processes, but I’ve learned I just have to be me. The story develops as I write—it’s how I come up with the twists.”

It’s clearly a process that works. Keliikoa has already turned in the third—and perhaps final—book of this series, but has signed a two-book deal with Level Best for a small-town police procedural based on where she grew up. The first in that duology hits shelves in September of 2022.

But wait, there’s more! Keliikoa, who is currently unagented, is querying a standalone mystery featuring an unreliable narrator, and she’s also writing a new book about a paralegal who is forced outside of her comfort zone when her boss is discovered murdered, her sister has gone missing, and the two events seem inextricably linked.

It’s a lot—but Keliikoa says it’s never too much. “I think best with my fingers in motion.”