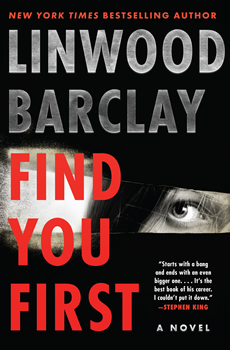 For Miles Cookson, the protagonist in Linwood Barclay’s new thriller, the answer could be the difference between life and death. FIND YOU FIRST explores the issues of biological paternity pitted against the true meaning of family, with a dangerous twist.

Tech giant Miles Cookson is dying. His doctor diagnosed him with Huntington’s Disease, which is like “taking Alzheimer’s, ALS, and Parkinson’s and putting them all into a blender.” There is no cure, and his symptoms are getting worse. When the doctor asks him if he has children, his thought is “Isn’t that just the fucking million-dollar question?”

Although he never married or had children in the traditional sense, he’d donated to a sperm bank when he was young and broke. Now he wonders if any of the children produced from that donation have the gene that causes Huntington’s. He needs to locate his biological children to warn them, and he plans to give each a share of his vast multi-million-dollar estate.

After employing unethical means to determine the identities of his biological children, Cookson tracks them down. But something isn’t right—they’re disappearing before he can even contact them.

And his brother Gilbert’s wife, Caroline, is employing nefarious means to get her share of his estate.

Little does Cookson know that the doctor in charge of the reproductive center where he donated has secrets of his own, and his children may face a danger worse than Huntington’s.

FIND YOU FIRST explores the questions of what makes a family, and if you could find relatives you didn’t know you had, would you?

“Sometimes you finish a book and think, where did that come from? In this case, it was a photo essay in The New York Times Magazine in which someone traveled the country tracking down half-siblings, all of them the product of the same sperm donor,” Barclay says. “My recollection is that it was a heartwarming story, but being a thriller writer, I always see the cup as half empty and began wondering how this could all go horribly wrong. Of course, FIND YOU FIRST ultimately went in another direction. What if the children started vanishing, one by one, before bio-dad could find them?”

Although Barclay’s main intention was to write “an entertaining page-turner,” he’s interwoven social issues throughout the story.

“We all want to know who we are,” he says. “To achieve a greater understanding of what makes us tick, we need to know our history. Part of that is our DNA. We don’t just appear in this world out of thin air. And there’s more to being a parent than just a genetic connection. We can end up forging just as strong a relationship with someone who doesn’t share our genetic blueprint. FIND YOU FIRST isn’t a scientific tale, weighed down with technical details. All this DNA stuff is a jumping-off point to tell a human story, about people trying to make sense of their lives by finding out who they really are.

“I suspect FIND YOUR FIRST may get people thinking that learning about one’s genetic makeup, and how it can connect you to total strangers, is a game-changer. But maybe not always for the good.”

Barclay says that personal history sites like Ancestry.com and 23andMe.com informed the story.

“It was those TV commercials you see every night that contributed to plotting out the story,” he says. “This is a thriller I couldn’t have written 10 or 15 years ago. Who could have imagined that one day you could send away for a kit, provide a saliva sample, mail it back, and learn everything about your genetic profile and your connection to relatives you didn’t know about? It’s the stuff of science fiction, but it’s real and it’s here. One’s anonymity is said to be protected, but when you’re a thriller writer, all bets are off.”

Barclay admits that his 30-plus years of experience as a journalist continues to contribute to his novel-writing.

“Working in newspapers is like getting a crash course in the world. One day you’re covering a trial, the next a horrific accident, and the day after that you’re reporting on a political campaign,” he says. “In writing a book, you find you’ve learned a lot without even realizing it. But more than anything, having worked in newspapers has taught me discipline, that writing is a job. You don’t wait for the muse to strike when your column must reach the city desk in the next two hours. Writer’s block is not something you can indulge.

“When I’m in the thick of writing a book, I’m at my desk right after breakfast, and I don’t call it a day until I’ve done about 2,000 words. On a good day that can happen before lunch, but I generally go until mid-afternoon. When you’ve worked at a paper, deadlines are everything. They are sacred. I have never delivered a book or a rewrite late and generally deliver early. Writing is not romantic or some magical pastime. It’s not precious. It’s work.”

What about Barclay’s next novel?

“A woman returns from a routine trip to the grocery store and pulls into the driveway of a suburban home. She exits her car and looks, stupefied, at the building before her. ‘Where’s my house?’ she asks. ‘What’s happened to my house?’ Someone tore down the residence she was expecting to see and built a new home on that lot nearly two years before. Stunned, the woman gets back in her car and speeds off. When neighbors report what they’ve witnessed, they say that woman looks just like the one who used to live in the house that was demolished. A woman who vanished years ago.

“With luck, later this year there’ll be an extra book, most likely an eBook initially, that’s more of a Michael Crichton kind of tale, different from what I usually do,” Barclay says. “Think Jurassic Park, but instead of dinosaurs, it’s self-driving cars.”

He has some advice for other writers.

“Read. Read a lot. Read different things. See how other writers do it. And don’t let that blank page paralyze you. Put something on it, anything. Don’t wait for that perfect sentence. You can always go back and fix it. Look online for Elmore Leonard’s 10 rules for writing, like leave out the parts readers skip anyway and never start with weather.

“These days, there are a lot of things competing with a book for attention, mainly everybody’s stupid phones. My advice is, you’ve got to set the hook as quickly as possible. You will live or die on that first page. Grab me by the lapels before I get to the third paragraph. Give me no choice but to read on.”

During isolation from the pandemic, Barclay not only kept busy writing but also gained calm of mind by working on his model train dioramas.

“My dad set up a train layout for me when I was around five years old. Years later, ever since my wife and I graduated from apartments to actual homes with actual basements, I’ve always built a model railway. I think this latest one, which fills a room roughly 18-feet-square, is my eighth or ninth, and is my most ambitious.

“When we moved in late 2018, I had to tear down a huge layout. I began rebuilding a different one in our new home in May 2019. I’ve had a lot of help from our son, Spencer, who is working full time on an exhibit, Little Canada, that will open later this year in Toronto and will depict this country north of the border in miniature.

“When you’ve spent the day imagining a world on a computer screen, it clears the head to make one with your hands. Laying track, building mountains, soldering electrical connections—it puts the day job right out of your head. There’s something very zen-like, standing in the middle of this world you’ve made, as trains slowly move around you.”

What about Barclay might his fans not already know?

“My parents bought a cottage resort/trailer park/fishing camp in the Kawartha Lakes region of Ontario when I was 11, and at age 16, when my father died, I essentially took over running it. My mom managed the place, but I did all the actual work. My years at that place, before I left at the age of 22, taught me as much, or more, than newspapers ever did. And it convinced me that burying fish guts—one of my daily tasks—was not something I wanted to pursue as a career.”