Secrets Laid Bare Under a Cloak of Anonymity 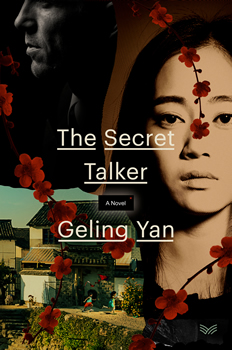 You probably don’t have to look past your own computer—or phone—screen to come up with at least one way the internet has changed your life—for better or worse. Whether it’s the ability to communicate with loved ones via social media, find true love on a dating app, or build your business through e-commerce, the information highway has paved the way to opportunity.

But traveling that road comes with some bumps. In the US, one in 10 adults will fall victim to an internet scam every year. In 2018 internet-enabled theft, fraud, and exploitation were responsible for a massive $2.7 billion in financial losses. One in every 10 profiles on a free dating site is a fraud. And according to a 2019 National Violence Against Women Survey, 8.2 million women and 2 million men have been cyber stalked at some time in their lives.

Statistics like those don’t just give a person chills—they provide excellent fodder for authors of psychological thrillers. And it’s this last statistic that provides the backdrop for Chinese-American author and screenwriter Geling Yan’s latest page-turner, THE SECRET TALKER.

Beautiful, diligent, and passive, Hongmei is the perfect wife to Glen, an intelligent and caring college professor. But Hongmei’s idyllic life is forever changed when a secret admirer begins emailing her. It’s innocent at first—a little flirtatious—but Hongmei soon realizes this mysterious stranger knows far more about her than he should, including her deepest, darkest secrets.

As Hongmei is forced to confront her dark past, she is desperate to turn the tables on her stalker—but doing so will not only tear her marriage apart, but potentially her life as well.

In this exclusive interview for The Big Thrill—translated by Lawrence A. Walker—Yan discusses how the internet has altered “relationships,” for better and worse, and how this fact helped to inspire her heart-wrenching new psychological thriller, THE SECRET TALKER.

The conceit for THE SECRET TALKER is compelling—a woman with a secret admirer, who is hiding secrets of her own. What was the inspiration for this story?

Don’t you think all women need to be admired, and welcome it? Admiration comes out of sensitivity and attention. Admiration includes paying attention to every detail of her body, decoding her body language, being sensitive to her subtlest gestures, being aware of all the expressions behind her expression. Women always feel that the people closest to them don’t understand, don’t comprehend them; that they lack the sensitivity that comes from true passion. Without this sensitivity and understanding, women lack a sense of security and don’t have the impulse to open their hearts completely.

I realized that on the internet, you can hide in invisibility, so speaking with another person is kind of like speaking to another part of yourself, or like confessing to a priest of your own creation. So it becomes very daring, very frank, with a desire to give the burdens you carry in your heart to the other person, to have that other person share the burden. Secrets are very heavy, and someone who keeps a huge secret cannot live carefree. Over time, the corrosiveness of secrets can erode the most intimate relationships.

So when a personality appears on the internet who’s attentive to Hongmei, who tries to understand her and is sensitive to her inner personality, then Hongmei longs to unload a portion of her heavy secrets to someone who can help her bear them.

Aside from being an entertaining and gripping page-turner, THE SECRET TALKER touches on a number of themes—ambition, cultural differences, identity. What draws you to these themes and why was it important for you to include them in THE SECRET TALKER?

Before I write, I rarely think of the theme, of the motif or meaning. I think any literary work in which the motif or meaning is obvious is not good literature. First and foremost, I’m keenly interested in my leading male and female characters, and I create them because I want to understand myself through them. I use them to carry out my fantasies, to do things I would not do myself. My characters are extensions of myself. I would not want to be evil or commit crimes, but as a novelist curious about human nature, psychology, and behavior, I use my characters to pass through the predicaments I set up for them, to explore infinite possibilities, and through these literary characters I greatly extend myself.

You take a truly deep dive into Hongmei’s character—the authenticity of her struggle, her honesty. When she is first approached by the internet stranger, she engages with him quickly—why does she feel safe in interacting with this stranger?

As I mentioned previously, on the internet everyone enjoys being nameless, having the privilege and protection of anonymity. It is like a person hiding in a crowd; if the crowd curses, he curses along with it, and only by cursing along with it does he feel safe. But if he doesn’t curse along with it, he loses the crowd’s protection and is not safe. On the internet many people tell the truth, or attack others, or curse others, anonymously, thinking that if they can disappear into the vast ocean of the anonymous crowd they can feel safe. If someone goes into a Catholic church and confesses his sins to an unknown priest, he feels safe, because he knows the priest will not judge him. Hongmei has a similar feeling of not being judged, so she feels safe enough.

Though a small book, THE SECRET TALKER packs a punch. It’s a visceral read, which I suspect is enhanced by your experience as a successful screenwriter. How do the two writing disciplines complement each other? How do they war against each other?

I don’t consider myself a successful screenwriter. I write screenplays because I have no choice. Often I’m simply the director’s last resort. I think that good novel-writing emphasizes characterization. It’s the personality that makes a good movie or novel character unforgettable.  When we see a character with a completely new, never-before-encountered personality, we remember the whole story, but the reverse isn’t true. Many B movies have garish stories and suspenseful plots, but their characters are flat, and as a result you forget the movie right after you see it; you have simply passed the time for two hours. In a good screenplay, the characters’ dialogue and actions serve the goal of characterizing their individual dispositions. Because the personalities of the characters in a drama are different, conflicts arise, thereby advancing the plot; it’s not a case of the characters artificially creating conflicts to advance it.  The former is the objective in novel writing, and the latter is the formula for a B movie. So in that way, a good script and a good novel are similar.

THE SECRET TALKER is not your first novel—I’d love to know a bit more about your publishing journey.

At the age of 21, I started publishing pieces in newspapers and magazines, and I’ve written all the way up to this day without stopping. My works have been translated into 18 languages, including THE SECRET TALKER, which is my fifth book to be translated into English. [Translator’s note:  She wrote her novel The Banquet Bug directly in English, so it does not count among the English translations.] I’ve done only two types of work in my life: dancing and writing. I love both, so I don’t feel they are work. In a group I’m the observer and the listener. When I’m in a group, I speak little but watch and listen a lot, so it is easy for me to capture details of people’s personalities, note them, and use for a possible character in a novel. I’m a dangerous person, because I use the novel form to expose people’s secrets, but once the secrets have passed through the magic of fiction and been turned into a novel, it’s difficult even for parties involved to recognize them. It’s fortunate that I have the format of the novel to give me the freedom of fiction, to allow me to discover and reveal truths about human nature and history.

While checking out your impressive IMDb page, I noticed that THE SECRET TALKER is in pre-production. Are you adapting the script for that? What can you share about that project at this time?

This film is being produced by an Italian director, Cristiano Bortone. I’m not involved in the screenwriting; I just provide suggestions about the script. At the beginning, the director adapted the novel into a script himself. Later he involved a New Zealand scriptwriter, but when he got the treatment, he felt it was going in the wrong direction and called off the cooperation. Now we have a different screenwriter on the project, an Italian writer. I just read the latest treatment, and I think it’s now going in the right direction.

THE SECRET TALKER was translated to English from Mandarin. What is the “translation” process like? Do you feel like things get “lost” in translation?

I think Chinese is a difficult language to translate. Every time a draft translation of my work lands on my desk, I read it as if it were someone else’s work. I think I have the ability to stay detached and read my own work objectively, because when I read a translation draft, I rarely compare a sentence or a paragraph with my original work. The only time I do is when I discover a passage that doesn’t sound right. I don’t nitpick. It’s unfortunate that Chinese is a such a unique language, with origins so different from Western languages, so every time I read a translation, I feel something is lost, some of the strength or color.

I just finished writing a rather long novel, but these days in China the authorities don’t grant my novels official book licensing numbers, so there’s no way to publish them in China. For that reason, I’m considering writing in English again. I swim every day, and when I swim, I feel that swimming laps back and forth is rather boring, so I think about a novel’s structure, its beginning, its characters and such, and that way I enjoy swimming more. After I have swum for a few more months, maybe I can talk more concretely about my next project.