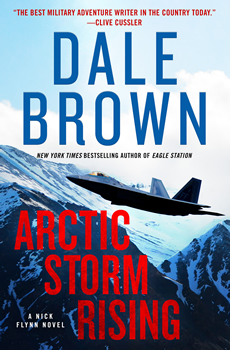 Flynn is on the hunt for Russian commandos in the mountains of Alaska after a Russian bomber test pilot flies away with the country’s most advanced long-range stealth bomber.

“I believe the Arctic could be the next potential battleground between the US and Russia,” Brown says. “Russia is already heavily investing in military infrastructure in the Arctic, and the melting of the polar icecap means the Arctic can be accessed by larger and larger vessels more often during the year.”

ARCTIC STORM RISING isn’t just a great story—it doubles up as a vehicle to introduce readers to a new character.

“Nick Flynn is a talented and dedicated officer caught up in politics,” Brown says. “But instead of being court-martialed, he’s banished to a remote outpost in Alaska, at the head of what appears to be a band of misfits.”

Brown says he listens to his readers and trusted advisers. After some of them described one of his recent books as “too science-fictiony,” he took that criticism to heart while writing ARCTIC STORM RISING.

“Although all of my novels are based on technology that exists or at least is written about in trade publications, I thought I’d try grounding my stories to Earth,” he says. “My previous storylines and characters aren’t going away, but they’ll be a bit more 21st century.”

The novel is packed with action scenes, but also ones that show how Flynn takes the vastly diverse group of soldiers and works them into becoming a cohesive team.

“I think it’s true for all teams,” Brown says. “It’s interesting to show them fighting through their differences and coming together as a unit. It’s also important to team up in extreme environments like the Arctic.”

Although Brown is definitely a techie and a plot-driven writer, he also strives to create characters that will make readers care for them—characters that can be hated or loved, or maybe even a little bit of both.

“There are still plenty of flying scenes in ARCTIC STORM RISING, but most of the action is on the ground,” he says. “I had to do a lot of research on infantry tactics. But the biggest challenge was learning about having those troops working, fighting, and surviving in Alaska.”

The next Nick Flynn novel is underway, and so are a couple more story ideas.

After his considerable success, Brown is happy to pass on his knowledge to the next wave of aspiring authors.

“My main piece of advice to aspiring authors: write, finish, and let others read and critique your work,” he says. “Too many good authors get discouraged, or paint themselves into a literary corner, or let themselves be distracted. Never give up!”