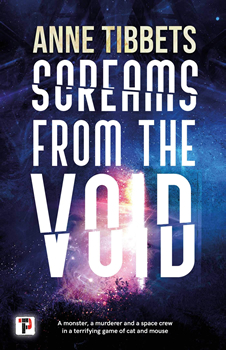 Back in early April, the Twitterverse lit up in lively debate after a Tweet challenged the idea that horror could be set in space. Fans of the genre clapped back, citing numerous pop culture examples that disproved the Tweeter’s theory, not the least of which included the classics Alien and 2001: A Space Odyssey.

“Of course, the person who wrote the Tweet wasn’t accounting for subgenre,” she says. “But for me, it was the perfect timing to have this discussion, because I happen to have a space horror that’s about to release.”

Indeed, there’s no question as to which genre Tibbets’s forthcoming SCREAMS FROM THE VOID belongs—if the body count alone doesn’t seal the deal, the horrific, near-indestructible monster aboard the spaceship will. And if anything, the location alone—deep space—makes it that much more terrifying.

For two years, a small crew has lived aboard the freighter ship Demeter—yes, naming the ship after a god of plants and growth was intentional, though the Dracula reference was a happy coincidence—collecting botanical life from other planets. It’s been a long haul, but they’re closing in on their final weeks.

For Mechanics Ensign Raina, the end can’t come soon enough. Not only has she suffered nearly two years in close quarters with her abusive ex, she’s had to contend with an overbearing boss as well. This “forced family” has become a ticking time bomb on the verge of explosion—even without the additional tension that comes when a foreign biological creature sneaks on board and initiates a gruesome killing spree. [Ed. note: RIP to your sleep, my friends.]

“They’re quarantined,” Tibbets says, acknowledging the fact that in the past year, we’ve all become far too aware of the tension that builds in that kind of environment. “There’s been two years of agitation. They’re literally trapped with people they hate. And I thought, what if, on top of everything else, there’s a monster on board and you had to find a way to get rid of it?”

So for a while, the monster does what he wants—and that’s eat people.

There’s a lot of blood and gore, which makes sense, since Tibbets—who admits she can’t actually watch horror movies herself—wrote this book with the goal of grossing herself out.

“It might be too bloody for some people, and I respect that,” she says. “But we’re dealing with a beast. It has no moral compass. There’s going to be carnage.” Enough so that Tibbets drafted a map of the ship and drew Xs to remind herself where all the dead bodies lay. “I didn’t think it would be fair for the story to shy away from that.”

Still, she didn’t want this to be “just a slasher.”

She needn’t worry. Tibbets weaves in enough internal conflict to balance out the blood, while dialing up the tension and suspense, and tackling a number of hot topic issues without hitting us over the head with them. While it’s not billed as such, SCREAMS FROM THE VOID takes a hard look at domestic abuse, misogyny, and sexism through the lens of Tibbets’s scrappy protagonist, Raina.

“Here’s the truth: Raina is a manifestation of a lot of women I knew, including myself, in their early 20s and late teens, who make poor choices and have self-esteem issues,” she says. “Part of me wanted to show that the reason some young women gravitate toward abusive men is because they have abuse in their history.”

That’s true for Raina’s past—but it’s also a factor in her present. She continues to be beat down by her boss, and in that vulnerable state, it’s understandable she’d be drawn back to her sexy ex, Morven. And he’s not such a bad guy.

“He’s on his best behavior at first,” Tibbets says. “But when his masks fall and you see who he really is…”

And now Raina has to contend with him and her misogynist boss, Sergeant Pollux.

“A lot of misogyny is predicated by the women in our lives,” Tibbets says. “Raina’s mother taught her she will never be as good as her brothers, would never be good enough.”

The reader learns much of that through backstory, which is expertly woven in through what she calls flash backwards—essentially the “flashbacks” are told from back to front. It’s a complicated non-linear plot that sent Tibbets down many structural rabbit holes.

“Typically, I tend to think of a story linearly, starting at the beginning. I outline, write about 30K, and then stop to outline again,” she says. “But there were so many versions with SCREAMS. I moved the deck of index cards back and forth on the pinboard ad nauseam. It was an exercise in story architecture.”

The format works, helping to keep the tension throughout the novel and avoid the murky middle to which many books fall prey. The pacing is lightning fast, in part because of Tibbets’s whip-smart dialogue—perhaps a carryover skill from her past life as a screenwriter—and fully realized characters that have no choice but to act. Or die.

Of course, some of them do. No spoilers, but the novel is aptly titled, and the screams of the victims will echo in your mind long after you finish the book. This kind of reaction speaks well to Tibbets’s command of the craft.

SCREAMS FROM THE VOID is not her first rodeo—she’s published two new adult novels under her own name for Harlequin, and written two books in the Extinction Biome military sci-fi series under the pen name Addison Gunn—but this is her first hardcover release.

Pretty great for an author who says she’d almost given up on writing altogether. Although she does have a book on submission with her publisher, these days, the bulk of her time is spent as a literary agent, shepherding the works of her clients into the publishing realm. But it’s conceivable that when the world returns to some semblance of normal—and her house is once again quiet—she might carve out some time to start writing something new.

“I’m the kind of person who needs absolute quiet,” she says. “And those noise-cancelling headphones don’t blot out anything. If I do get a moment of silence, who knows? Maybe the words will come back.”

We can only hope.