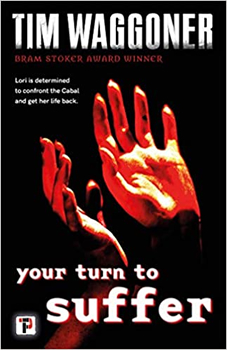 Lorelei Palumbo is harassed by a sinister group calling themselves The Cabal. They accuse her of having committed unspeakable crimes in the past, and now she must pay. The Cabal begins taking her life apart one piece at a time—her job, her health, the people she loves—and she must try to figure out what The Cabal thinks she’s done if she’s to have any hope of answering their charges and salvaging her life.

Tim Waggoner recently spent some time with The Big Thrill discussing his latest horror, YOUR TURN TO SUFFER:

I hope they’ll enjoy it, of course, but I also hope that they come away with a broader appreciation of what horror fiction can do. 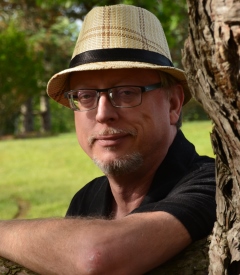 The biggest challenge—as it often is in my fiction—is getting all the many, many ideas that make up the story to coalesce into a streamlined, unified whole. The biggest opportunity was a chance to revisit some concepts from one of my earliest novels, The Harmony Society, which appear in this book.

Often, when I reach the last few chapters, I veer away from the ending I’d originally imagined and come up with something very different. That’s what happened this time, and the novel’s all the better for it.

As I said earlier, this novel connects to The Harmony Society, particularly in its use of a dark extradimensional road called the Nightway.

Stephen King, of course, for his depiction of character and place. Clive Barker for his fearless exploration of sex and violence in horror, as well as his use of dark fantasy in his fiction. Shirley Jackson for her literary style and her ability to build dread in her stories.

Why are you attracted to writing surreal horror?

The scariest thing to me is when the rules of reality are upended, and you can’t trust anything. Surreal horror creates that feeling for me more than any other type of fiction.

Critically acclaimed author Tim Waggoner’s first novel came out in 2001, and since then he’s published over fifty novels and seven collections of short stories. He writes original dark fantasy and horror, as well as media tie-ins. His novels include Like Death, considered a modern classic in the genre, and the popular Nekropolis series of urban fantasy novels. He’s written tie-in fiction based on Supernatural, Grimm, The X-Files, Alien, Doctor Who, A Nightmare on Elm Street, and Transformers, among others, and he’s written novelizations for films such as Kingsman: The Golden Circle and Resident Evil: The Final Chapter. His articles on writing have appeared in Writer’s Digest, The Writer, Writer’s Workshop of Horror, Horror 101, and Where Nightmares Come From. His latest nonfiction release is Writing in the Dark, a book on writing horror. In 2017 he received the Bram Stoker Award for Superior Achievement in Long Fiction, and he’s been a finalist for the Shirley Jackson Award, the Scribe Award, and the Splatterpunk Award. His fiction has received numerous Honorable Mentions in volumes of Best Horror of the Year, and he’s had several stories selected for inclusion in volumes of Year’s Best Hardcore Horror. In addition to writing, he’s also a full-time tenured professor who teaches creative writing and composition at Sinclair College in Dayton, Ohio.