An Old Chapel and a Macabre Past 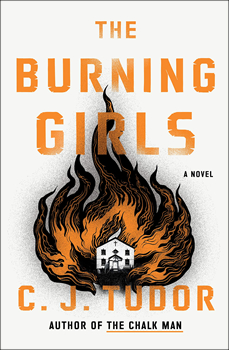 In her award-winning debut The Chalk Man, Tudor wove a chilling mystery about a childhood game gone tragically wrong, a brilliant novel Stephen King lauded that in 2019 went on to win ITW’s Best First Novel award.

Tudor followed that up with The Taking of Annie Thorne and last year’s pulse-pounding The Other People, each new work further cementing her place as “Britain’s female Stephen King” and taking readers to dark, dark places.

With this year’s THE BURNING GIRLS, the Sunday Times bestselling author perhaps delves into her darkest story yet, with a book that begins at a weathered old chapel on the English countryside, weaves its way through a macabre past, and ends with—

Actually, you’ll have to read the book to find out how Tudor deftly propels us to the shocking finale. THE BURNING GIRLS is not for the faint of heart, but it reads like a mastercraft of gender-blending fun, told through the eyes of characters that will stick with you long after you turn the final page.

In this interview with The Big Thrill, Tudor talks about the chapel that inspired THE BURNING GIRLS, the history that informed her writing, and why you may want to read this thriller with the lights on. Seriously.

While it’s true that writers should get better with every book, you embody that fully—and you debuted in a place of excellence, so that’s saying a lot. THE BURNING GIRLS is extraordinary. Could you please share a little about the book’s inception?

Thank you so much! Well, two years ago, my family and I moved from Nottingham to a rural village in East Sussex. On the day we came to view what is now our home, we drove past a small, white-washed chapel on the outskirts of the village.

It looked so out of place, the sort of chapel you’d expect to find in a dusty midwestern town in the US, not in the middle of the English countryside. And right away, something about it struck me as odd, creepy.

I started to research the history of the area and found that it had quite a macabre past. Five hundred years ago, 17 martyrs had been burnt at the stake during Queen Mary’s Purge of the Protestants. Every year the local bonfire societies make elaborate effigies which are burnt on huge pyres on bonfire night.

It put me in mind of one my favourite films—The Wicker Man—and seemed to lend itself perfectly to a folk-horror infused mystery featuring exorcism, pagan rituals, burning apparitions, and missing girls. Oh, and an unconventional priest with a few secrets of their own!

It was a tough book to write at times. Definitely my hardest—but I think that’s because with each book you push yourself a little bit more—and hopefully it’s worth it!

Your books are hard to categorize—not your typical thriller, horror, or mystery, even. They’re a delightful mash-up. What are the elements of each genre that lure you in, and how did they manifest in THE BURNING GIRLS for you?

Well, as a child my first introduction to “grown-up books” was Agatha Christie, swiftly followed by Stephen King, so I think that’s where my love of both the mystery and horror genres comes from. I have a penchant for the dark and creepy, but I also love a good, old-fashioned whodunnit. I like mixing things up. I think it makes a book more interesting. With THE BURNING GIRLS you get a mystery—two teenage girls who disappeared from the village without a trace 30 years ago. You also get the macabre history of the burnt martyrs, creepy villagers, and ghostly apparitions said to haunt the old chapel.

You “go for it” in this book—we’ve got a dark past, religious martyrs, an insular town, missing girls, and exorcism. Incredible. What are you hoping readers take away from this novel, in addition to a page-turning, terrifying reading experience?

Haha! Well, I always hope readers will finish my books feeling they’ve had a good ride! I guess that’s the best you can hope for. There’s nothing worse than finishing a book and feeling a bit let-down or cheated. The hardest trick for an author to pull off is to give the reader a satisfying ending. So if I can manage that, I’ve succeeded. I also hope they really soak in the atmosphere of creepy Chapel Croft and enjoy Jack and Flo. They were fun characters to write.

Speaking of terrifying, this book nails the suspense. The Big Thrill is as much for aspiring writers as it is for readers. What tips would you offer to writers on creating effective suspense?

Create good, credible characters. People who the readers care about. If they don’t care about your characters, they don’t care what happens to them. Foreshadowing is a great tool for creating a sense of unease. Leave your readers wanting to read just one more chapter—try and end each one on a reveal or a question. Lead them somewhere and then change direction. You want to keep the reader slightly disoriented and on edge.

Creating authentic, flawed characters is a bit of your specialty—and you nail it again in THE BURNING GIRLS with Jack and Flo, and even the other characters in Chapel Croft. What can you share about the development of Jack and Flo? Their dynamic is really complex—what was the inspiration for their relationship?

Well, Jack is a somewhat unconventional priest—fond of a cigarette and with a more contemporary view of religion. Flo is a typical teen in some ways. But in others she’s kind of alternative. She’s often more the parent than Jack.

I’m not religious myself so I felt it would be interesting to write a priest as the protagonist. The challenge was to make the character relatable while also making their faith believable. With Flo it was also a balancing act. I didn’t want her to be a teenage stereotype, either a complete misfit or Miss Popular. I think most of us fall somewhere in between. I wanted her to be quirky but savvy. I guess overall I didn’t want either Jack or Flo to be victims. I like to think they both kick ass!

You describe bullying with heartbreaking detail—it’s alarming, but also so “real” given the horrible instances of bullying happening with increased frequency. Why was it important for you to tackle this issue in THE BURNING GIRLS?

It’s been a theme in three of my four books, I realized recently. I wasn’t a popular kid at school. I didn’t experience terrible bullying, but I definitely had some unpleasant experiences. I remember one boy telling me that I was so ugly I should kill myself. And that was just your average day in school. So I think I come back to it a lot because bullying blights the lives of so many children. Flo deals with it well. She’s pretty secure in herself. But I remember putting on a front and crying at home. And although you could say it’s made me who I am, no one should have to go through that toughening-up experience. Our kids should be safe at school. It starts with parents. It is our responsibility to teach our children the value of kindness, that it’s okay to be different. It’s not okay to be cruel.

This is a dark book—perhaps your darkest. When the writing is done, what are some ways you pull yourself “out” of that darkness?

I don’t really let it pull me in. I can be writing one minute and doing crafts with my little girl the next. I find it quite easy to switch off. It’s a story. I get involved, yes, but I’m always aware that I’m just making stuff up!

Are you able to share anything about what you are working on next?

Yes, it’s called The Sixth, and I think of it as The Dead Zone meets We Need to Talk about Kevin.

Ten-year-old Ripley is a little girl with a unique gift. She sees things that haven’t happened yet. Her mum, Lisa, used to have the same gift. When she was 14, her foresight saved the life of her best friend, Danny. A week later, Danny shot dead five people during a school detention.

From that day, Lisa has sworn never to change fate. And she has taught her daughter the same rules. But when Lisa’s mum dies and the pair have to fly home for the funeral, Ripley makes a mistake. She foresees a fatal accident on the plane and intervenes.

The incident sets in motion a series of events that dredge up ghosts from Lisa’s past and also put Lisa and Ripley in danger from a monster in the present. Because the man Ripley saved on the plane is a killer. Five have perished at his hands. Now he has his sights set on Number 6.

I’m hoping people enjoy this one. It’s a slightly different ride yet again—but there may just be a familiar face popping up in it!