Debut Kicks off with a Gut Punch 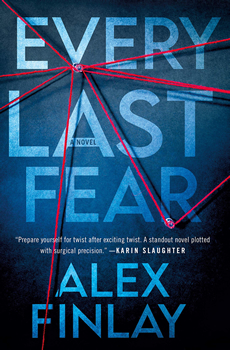 The local police are calling it an accident—an unfortunate gas leak at the family’s vacation rental in Mexico—but the FBI and State Department aren’t convinced.

The tragedy is a big deal, the kind that makes headlines across the globe, because this isn’t the first time the Pine family has been in the news. The eldest son Danny, currently serving a life sentence for the murder of his teenage girlfriend Charlotte, was the subject of a viral true crime documentary suggesting Danny was wrongfully convicted. A lot of people believe it, too—except his brother Matt, a student at NYU who wasn’t on holiday with his family…and who has been harboring a secret since the night of Charlotte’s brutal killing. He thinks Danny might be guilty.

And now, as the investigation into his family’s deaths starts to reveal a connection to Danny’s case, Matt is forced to face the past to unearth the crime that sent his brother to jail—in the process, putting his own life at risk.

In this exclusive interview with The Big Thrill, Finlay shares insight into some of the nuances that were woven into his explosive debut.

I love the little story you include in the acknowledgments about how this book came to be—kind of that ideal “meeting an editor in New York and talking about your idea over drinks” dream. For those who don’t know, can you share a little about how this novel came to be?

Actually, the idea for the story came during a vacation to Tulum, Mexico. I’d booked a spring break trip for my kids at the last minute and the only vacancy I could find was an eco-hotel off the beaten path. By day, we experienced one of the most amazing areas I’ve ever visited—breathtaking beaches, stunning ruins, great food—what the vacation guides say about Tulum is true. By night, we’d retreat to this lovely, but isolated, hotel, which was in the middle of woodland (to me, a city person, it seemed like the jungle). One night while sitting in the dark (they shut down the lights around 10) and amid the isolation and sounds of creatures in the forest, we watched a true-crime documentary on Netflix, so murder was on my mind. I separately had just read a news story about tourists dying suspiciously while vacationing. Around midnight I tapped out the first line: “They found the bodies on a Tuesday,” and it took off from there.

Flash forward to the summer, and I was at ThrillerFest and got into a conversation at the bar with an editor about my work-in-progress, and his enthusiasm was inspiring and validating. When the book was finally done, the manuscript landed on his desk. He not only championed it at the publisher, but made it a much better book.

There are so many great music references in this novel—and a few nods to one of my favorite bands, Linkin Park. What role does music play in your writing process?

I love pop culture, so I tried to weave in my favorite bands and movies and popular culture references. I’m not one to listen to music when I write, but music is otherwise a big part of my life. I included a reference to Linkin Park in EVERY LAST FEAR for two reasons.  One, I’m a huge fan, and the scene where Evan Pine and his son are driving home from football practice, music blasting, belting out the lyrics to Linkin Park songs is something I’ve experienced. Two, I’d read an article about how the band’s songs helped many struggling teenagers feel not so alone in the world. How the music, saturated in hurt and anger—but also about coping with internal turmoil and pain—helped kids know that they could acknowledge the pain and work through their problems. My protagonist, Matt Pine, had been estranged from his father, dealing with inner turmoil from his family being made infamous by a true-crime documentary, and then his dad, mom, and siblings die mysteriously, so I thought the song “Numb” set the tone for his journey.

EVERY LAST FEAR has an ambitious structure—the story is told through multiple points of view. You navigate the story without giving the reader whiplash, which is tricky. How did you land on that structure?

After I wrote the opening line where nearly the entire family is found dead, I painted myself into a bit of a corner. The story could’ve been told simply from the point-of-view of the surviving son, Matt.  But I thought having the mystery also unfold from the perspectives of each of the deceased family members in the days leading up to their fateful trip would be a unique way for readers to experience the story. The tricky thing was trying to ensure readers could invest in key characters who they know are dead—we’ll see if I pulled it off.

Speaking of structure, a portion of the book is told through transcripts of the documentary that kicks off a lot of heartache for the Pine family. How difficult—or easy—was it to weave that into the story?

Those were my editor’s idea, and it was an inspired suggestion. I wrote them very quickly after the rest of the book was pretty much done. It was interesting because I often spend days or weeks obsessing about certain lines I want to resonate, but I wrote all the documentary excerpts very quickly—it took more time to learn screenplay formatting than to write the scenes. Yet, there’s a line in one of them that readers quote more than any other in the book. For me, it’s a lesson in not overthinking because you never know what’s going to resonate.

You’re writing under a pen name, and I don’t know if you saw that there’s a social media thread where some are speculating that you’re A. J. Finn, author of The Woman in the Window, writing under a different pseudonym?

I’m flattered that anyone would even care to speculate, but alas, I am not him. But I must say, you have to love mystery readers—they jump into action when a mystery is presented.

You mention the opening line and chapter in EVERY LAST FEAR, which is an absolute gut punch. The Big Thrill is geared as much to aspiring writers as it is readers. What advice would you give to thriller writers about the importance of an opening chapter?

If you don’t grab the agent or editor in the first ten pages, you’re probably doomed. But if you can, the opposite is often the case. During COVID I’ve been watching many MasterClass videos, and Aaron Sorkin said something similar about screenplays.

It’s a difficult time to launch a novel. How are you navigating the marketing/promotion aspects of your career? Are there any virtual events you’re particularly excited about?

I’d love to do in-person events, but I’m not going to complain about virtual, both because I want everyone to be safe and because doing book events is something I used to dream about before being published. Also, booksellers are a creative and tenacious bunch, and they’ve found a way to make virtual events fun, intimate, and informative. My first virtual event for the launch of the book is at Houston’s Murder by the Book on March 3, which I’m excited about because it’s an amazing store and because I’m being interviewed by one of my favorite writers, Jennifer Hillier. The next day, I’m doing a virtual event at Book Carnival, another wonderful store on the West Coast. And I’ll be doing events throughout the month, which you can find on the Google machine.

I’m trying to finish my next book on deadline (gulp), and otherwise hoping for the world to get through this trying time, learn something important from it, and for life to start to resemble something like Before.