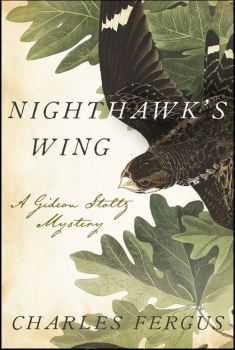 In this second in the Gideon Stoltz Mystery series, it’s now 1836 in the fast-growing town of Adamant. The young Pennsylvania Dutch sheriff Gideon has a new case when the body of a woman—suspected of witchcraft and residing in a nearby German settlement—turns up in a sinkhole. Suffering from a head injury after a fall off his horse, Gideon can’t recall anything that happened at the time of the woman’s death. As flashes of memory return, he realizes that not only did he know the victim, he was with her the night before she died. As Gideon delves into the investigation, he must include himself in the list of suspects.

Since this is the second novel in a series, my main character already existed: a young sheriff in a rough-and-tumble backwoods town in 1830s Pennsylvania. The setting is the central Pennsylvania uplands, then barely removed from the frontier. The plot sprang from something I read in Henry David Thoreau’s journals: people needing to pick up a decomposed body using a pitchfork. Could a Jacksonian Era sheriff puzzle out a crime from a corpse in such a degraded state?

“NIGHTHAWK’S WING” is a cross between a thriller and a mystery, with strong elements of both. Good thrillers and mysteries offer rich, complex characters; they evoke a strong sense of place. I’m particularly attracted to historical thrillers set in early America, because they teach us about a time and a place that can seem both deeply familiar and utterly strange, as they examine human emotions and motivations that are shared by people down through the ages.

It unflinchingly examines the oppressed status of women in the 1830s. One reviewer called it “a murder mystery that has at its heart a praise hymn to America’s rural past.” The story includes witchcraft, visions, and “the second sight,” and it glides along the edge between the gritty reality of the early 1800s and a parallel world of spirits and haunted souls.

I was surprised by the extent to which people still believed in witchcraft, spells, ghosts, and supernatural happenings in the 1830s. I was able to weave some of these beliefs into my plot, in which a young sheriff (who considers himself objective and matter-of-fact) ends up being helped and finally saved by his wife, who is gifted with unwelcome powers of second sight.

As a longtime equestrian, I worked many aspects of horse behavior, riding, and traveling on horseback into the story. I am also well-versed in the history of firearms, and the book includes technical information about guns that helps bring verisimilitude to its 1830s setting.

The Alienist by Caleb Carr showed me how a writer could bring to life a historical setting and situation through the investigation into a crime. James Lee Burke has been a huge influence, as he presents human motives and behavior in a vividly described place. The historical novels of Paulette Jiles depict characters who act bravely and admirably in difficult situations, with an excellent founding in American history. Finally, I deeply admire the seafaring novels of Patrick O’Brian, which to me are the finest thrillers and historical fiction ever written in the English language.

Charles Fergus is the author of 20 books. He has written for publications as various as Audubon, Country Journal, Gray’s Sporting Journal, Yale Review, and the New York Times. A native of Pennsylvania, he now lives in the remote Northeast Kingdom of Vermont with his wife, the writer Nancy Marie Brown, and four Icelandic horses.