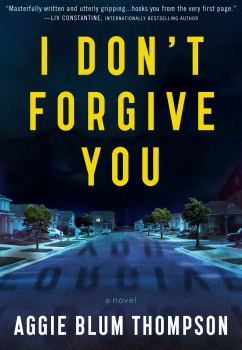 An accomplished photographer and the devoted mom of an adorable little boy, Allie Ross has just moved to an upscale DC suburb, the kind of place where parenting feels like a competitive sport. Then she’s framed for murder.

It all starts at a neighborhood party when a local dad corners Allie and calls her by an old, forgotten nickname from her dark past. The next day, he is found dead.

Soon, the police are knocking at her door, grilling her about a supposed Tinder relationship with the man and pulling up texts between them. She learns quickly that she’s been hacked and someone is impersonating her online. Her reputation—socially and professionally—is at stake; even her husband starts to doubt her. As the killer closes in, Allie must reach back into a past she vowed to forget in order to learn the shocking truth of who is destroying her life.

Aggie Blum Thompson recently spent some time with The Big Thrill discussing her latest thriller, I DON’T FORGIVE YOU:

First of all, I want them to enjoy it as an entertaining read and a whodunnit! I love hearing that readers did not predict the ending. But I’d also like them to really care about Allie, the main character, and her struggles.

The biggest challenge for me was really tapping into the emotions of the main character and her vulnerability. It took me a while to strip her defenses back and lay her vulnerabilities bare. But it was an opportunity to really grow those muscles and challenge myself to write in an uncomfortable space.

I wasn’t prepared for how much of the book would reveal itself to me in the writing. The published book is quite different from what I started with. It was only by getting to the end of the first draft that I really knew how to start the book.

I love thrillers and mysteries of all stripes, but all too often I am channeling Whoopi Goldberg from Ghost and shouting at the page, “You in danger, girl” because the main character seems to be making one foolish choice after another. My goal was to create a really sharp protagonist who makes all the smart choices, yet still ends up in serious trouble.

First and foremost is Agatha Christie. In my mind she is not only the master of the whodunnit but also a sharp-eyed observer of human nature. She manages to write about people in a complex way without sacrificing plot and makes it look effortless. I am also indebted to the incredible talented authors who have paved the way in this genre over the past decade and given me hours and hours of wonderful reading. There are too many to mention, but some of my favorites are Alafair Burke, Wendy Walker, Liv Constantine, Ruth Ware, Sarah Pekkanen, and Greer Hendricks.

My novel raises the question can we ever really forgive ourselves? And what price do we pay if we don’t? I enthusiastically believe the answer to the first question is yes, if you do the work. As for the second question, if you don’t—the burden of carrying shame and guilt around for decades can be like a fog casting a dark shadow on every aspect of life.

Before turning to fiction, Aggie wrote about real-life crime as a police reporter. Her writing has appeared in newspapers such as The Boston Globe and The Washington Post. Aggie lives with her husband and two daughters in Bethesda, MD and can usually be found tending her vegetable garden in the front yard.