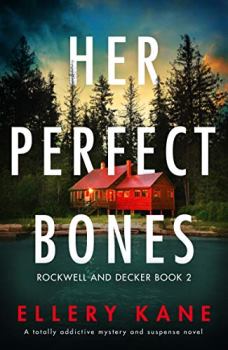 When a girl’s body is found hidden in a barrel in a woodland cabin, the local police are at a loss. The film from an old camera found looped around her neck is their only lead, but Criminal Psychologist Olivia Rockwell’s blood turns to ice when she recognizes the ragdoll in one of the girl’s last photographs. She used to own one just like it, and it can only mean one thing: if she doesn’t dig deep into the mind of a killer from her past—her own father—more innocent lives will be in danger…

The plot for HER PERFECT BONES began with the inspiration of the true life murder of Reyna Marroquín, a woman whose body was found mummified in a barrel thirty years after her death. Instantly, the image of a young girl came to me. I called her Shelby Mayfield, and she was afraid and confused and harboring a dark secret. She was on the run to the sleepy seaside town of Fog Harbor, the fictional town where my series is set. Once I started writing, Shelby’s story took on a life of its own. The more I learned about Shelby, the more I understood about her killer, and the rest of the plot began to take shape, revealing the twisted road that had led to Shelby’s death.

As a forensic psychologist in my day job, I am naturally drawn to the dark side of human nature, and I try to create complex characters who are, at times, both hero and villain. Writing thrillers enables me to make sense of many of the unfathomable events I hear about as a psychologist and to gain a sense of mastery, albeit fictional, over the unpredictable and sometimes tragic nature of human beings.

Since I was a little girl reading Nancy Drew mysteries, I have been an avid reader with versatile tastes. I enjoy lyrical and literary writers like Toni Morrison and Joyce Carol Oates, and I am a huge fan of Mary Oliver’s poetry. On the flip side, I revel in an edge-of-your seat page-turner like those by Stephen King, James Patterson, Tana French, and Gillian Flynn.

Forensic psychologist by day, novelist by night, Ellery Kane has been writing—professionally and creatively—for as long as she can remember. Just like many of her main characters, Ellery loves to ask why, which is the reason she became a psychologist in the first place. Real life really is stranger than fiction, and Ellery’s writing is often inspired by her day job. Evaluating violent criminals and treating trauma victims, she has gained a unique perspective on the past and its indelible influence on the individual. And she’s heard her fair share of real life thrillers.

Ellery lives in the San Francisco Bay Area of California, a picturesque setting that provides the backdrop for many of her novels. If you don’t find Ellery interviewing murderers behind prison walls or pecking away at her latest novel, she is probably at the gym landing a solid jab-cross to a punching bag, riding bicycles with her special someone, or enjoying a movie the old-fashioned way—at the theater with popcorn and Milk Duds.

Ellery was previously selected as one of ten semifinalists in the MasterClass James Patterson Co-Author Competition, and she recently signed a three-book deal with Bookouture for her new Rockwell and Decker mystery thriller series.