A Wedding Crasher Intent on Revenge 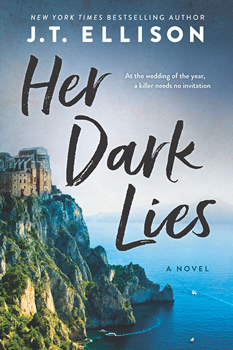 Bestselling author J. T. Ellison is well versed in enveloping her characters in betrayal, jealousy, and secrets. In her newest novel—HER DARK LIES—she ups the stakes.

When does a secret morph into a lie, and what’s the difference between the two? Ellison sums it up with a quote from Jamie Fraser in Diana Gabaldon’s Outlander: “We have nothing between us now save respect, perhaps. And I think respect has maybe room for secrets, but not for lies.”

In HER DARK LIES, Ellison explores the secrets that young fiancés might keep for fear of chasing away a new partner. “It’s a situation we’ve all found ourselves in, with partners, with friends, even with family. ‘If they know the truth about me, will they still love me?’”

Protagonist Claire Hunter is a painter of large abstracts and modern oils. She can’t believe Jack Compton, the wealthy son of a computer magnate, fell in love with her. Their wedding will be held at the Compton’s Villa—rumored to be haunted—on the isolated Isle Isola off the western coast of Italy. 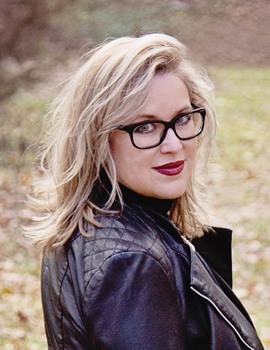 The inspiration for the story came to Ellison when her family took her on a birthday trip to Italy. “I was staying in a hotel on Lake Como across from the small island of Comacina, having dinner, when a yacht pulled up to the island’s dock. A wedding party emerged, disappearing into the island’s heart. Later, there were fireworks, and we could hear a grand party going on. I knew I had to write this into a book as a setting.

“Comacina has several legends surrounding it, which piqued my interest to do more research in the area. But I also needed crashing waves, extreme isolation, and a sheer cliff face, so I married Comacina with Capri for the cliffs and grottos, set it off even farther west where no one can reach it easily, and put a grand fortress on the cliff. Only later did I realize I’d put my fictional Isle Isola smack dab in the Tyrrhenian Sea between the Scylla and Charybdis.”

As Ellison explains, “Being on an island in the middle of the sea, only accessible by yacht, hydrofoil, or helicopter, during the stormy season, amped up the isolation needed to make the story as gothic as possible.” 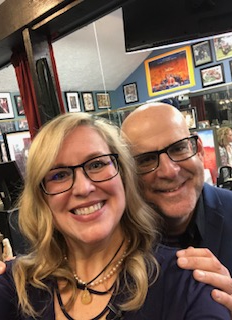 Ellison hosts Harlan Coben on the Nashville Public Television show A Word on Words in May 2019.

Only Claire’s and Jack’s immediate families, and the villa’s staff, will attend the wedding. The killing of an intruder who broke into Claire’s house before they left precedes the fairytale event. And now, police are waiting for Claire and Jack as they arrive on the island—a crew performing restorations on the villa’s fortress has unearthed skeletal remains.

Two bodies in two days are almost more than Claire can comprehend. She doesn’t even go to funerals—death disturbs her. As the family comes together for the wedding, a violent storm rolls in, making travel for the remaining family precarious and knocking out the electricity. Claire wonders if the storm is a harbinger of worse things to come.

As threats and violence continue around them, Claire wonders why Jack never speaks of his first wife, Morgan, who drowned while she and Jack were sailing. Should Claire be concerned about her safety? This rich and successful family is hiding something—or many things—but is it enough to deter Claire from marrying into it? And what about Claire’s own secrets? 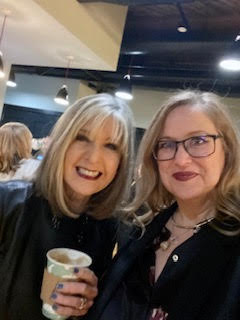 Ellison with Hank Phillippi Ryan at an in-conversation event at An Unlikely Story bookstore in Plainville, Mass., in January 2020.

As the danger escalates, Claire struggles to decide who is friend and who is enemy. She’s had trust issues with her own family, but her upcoming nuptials cause her to consider how far she’ll go to put family loyalty above all else. Claire begins to understand that marriage is a permanent commitment, and Ellison weaves this realization into Claire’s journey as it unfolds.

“Claire has a difficult relationship with her mother and sister; her father has been dead for many years,” Ellison says. “She’s been out on her own, making a life for herself, falling in love, getting engaged. Everything is progressing perfectly for her until a break-in just before they leave for the wedding results in a man’s death. It brings her past back into her present and forces out all the secrets she’s been keeping.

“This marriage is what dreams are made of. Claire senses there’s another shoe to drop, but she’s so busy keeping her own secrets hidden that she’s not pushing too hard for the truth. She knows her soon-to-be life as Claire Compton is too good to be true, and she’s terrified of losing Jack. But his closet also has skeletons that will affect their future. 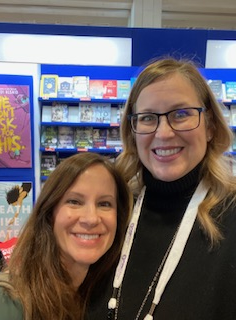 “The Comptons must also make sure she doesn’t blow their world wide open. It’s a delicate balance between the two, and Claire must decide where her loyalties lie. Loving Jack means fully trusting him. The question is, can she? They are soul mates with deep secrets. They each have a choice: trust the other or lose them.”

Throughout the tale, Ellison includes chapters written by an unreliable narrator, one whose identity is unknown until later in the story. This nameless character adds an extra element of suspense—we don’t know who’s pulling the strings that might unravel the Compton family.

And satisfyingly, the book ends with a sinister twist.

As a writer, Ellison has challenged herself to write 2,000 words a day. Has she been able to pull off this goal?

“It was going wonderfully until I hit this week, when pre-pub for book launch kicked into gear,” she says. “I love doing small challenges like this. One week it will be 2,000 words a day, another I’ll aim to write nothing but fiction, another no social media during the day. It changes things up and keeps me motivated. I’m starting a ‘write-in’ writers retreat with friends next week, and my goal is to write for four uninterrupted hours a day.”

But how does Ellison suggest working social media into your schedule? 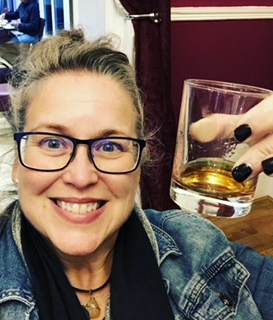 “After a long day tracking around the Scottish Highlands, a wee dram never goes amiss,” says Ellison. This photo was taken in Grantown-on-Spey on day two of a Speyside Whiskey Tour.

“Dedicate a computer, or part of your screen, to writing, thereby eliminating access to social media during peak work hours. Social media is a tool that you should use without getting sucked in,” she says. “I’ve learned how to pop on, talk with folks, scroll for a bit, then leave again, and I’m careful not to interrupt my work with it. In a normal work week, Friday is my non-fiction day—the day I caption photographs, write my blog, attend to my newsletter, and roam around the socials catching up.”

Writing novels is not Ellison’s only talent—she also writes and publishes short stories. She explains why these “little slices, vignettes, of life” appeal to her.

“Shorts are fun because you can push yourself into new areas,” she says. “I experiment with mine, testing out voice, structure, tense, and write about whatever’s caught my fancy at the moment. They’re the sorbet at the end of the first course—a palate cleanser. Because I know they’re limited to a few scenes, I can make them dynamic and exciting and not worry about how it will affect the characters down the road.”

What advice does Ellison give other writers?

“I think it’s important to settle into our work,” she says. “We’ve undergone a massive cultural shift and topped it with a pandemic. I’m a little burned out on the news cycle and find solace in my writing. I feel such peace in the silence, when it’s just me and my imagination. There’s plenty to write about, think about, and learn from what we’ve experienced, channeling the great energy out there into writing amazing, dynamic stories that will resonate with readers.”