Counterterrorism, Conspiracies, and the Capitol 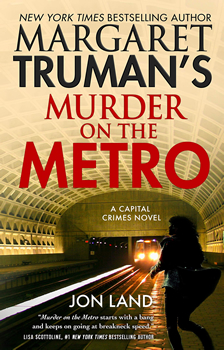 With the horrendous event that transpired at the Capitol on January 6, this thriller about terrorist attacks in Washington, DC, and across America is even more apt to make us consider, “What if?”

Fifty-six-year-old Brixton is now a private investigator, retired from his former high-security position at SITQUAL, a special intelligence division of the State Department. But upon identifying a terrorist while riding the Metro, he reenters the world of government secrets, special agents, and the quest for power. And terrorism is personal to Brixton—five years before, a suicide bomber killed his teen daughter right in front of him.

Kendra Rendine is a Secret Service agent in charge of Vice President Stephanie Davenport’s security detail. When the VP dies of a heart attack, Rendine’s intuition tells her something is awry. When she sees the news report showing Brixton saving dozens of people from a terrorist bomb on the Metro, she decides he might be able to help her. After contacting Brixton and explaining her suspicions, the two begin a race to uncover and stop the most horrendous attack on American democracy the world has ever experienced.

Here, The Big Thrill picks Land’s brain about taking over an existing series, the eerie parallels between the book and America’s current political landscape, and what makes a heart-thumping thriller.

Since you’re taking over at book 31, what research into the Capital Crimes series was required?

I read the last four books in the series to get an idea of the backgrounds of the recurring characters, particularly Robert Brixton. Beyond that, ever since Margaret Truman conceived the series, it’s been heavy on Washington settings and, especially, lesser-known Washington [area] settings. So a big part of my research was looking for that kind of locale to set scenes. That’s how I learned that Washington, DC, once had a trolley system before the Metro came along. There are unfinished underground trolley stations, and I used one of those for a scene. It’s always fun to learn something new for a book like MURDER ON THE METRO, and I hope the reader will learn something new too.

Did you continue in Margaret Truman’s style and voice, incorporate your own, or both?

I took on the Capital Crimes series after I’d already taken over the Murder, She Wrote series, so I already had some experience. Taking over a series requires me to take ownership of it. I have to make it my own, incorporating my own style and voice into the writing because I’m incapable of being a carbon-copy writer just imitating what’s already been done. This may not be the most prudent approach, but it’s the only way I know. And, remember, it’s not my voice or Margaret Truman’s, it’s the voices of the characters. Readers will note that Robert Brixton’s character is now more action-oriented, and I’ve expanded his background to establish that. To me, the classic thriller relies on action. That was something I could bring to the series without upsetting the apple cart to the degree I did with Murder, She Wrote.

How much did current social and political events influence the plot? Did you start with the question “what if?”

I always start with “what if?” In this case, slight spoiler alert here, what if the president was suffering a steep mental decline and the first lady, along with a small conspiratorial cadre, covered it up? That was the launching point for the book, and, in staging MURDER ON THE METRO around what is essentially a coup d’état, I never imagined how much life would end up imitating art. It’s incredible. One thing I was worried about was whether such a plot was too big and outlandish for the Capital Crimes series, or even in general. Well, recent events have laid those worries to waste and lend a new relevance to what’s going on in MURDER ON THE METRO, especially how far someone would go to keep their hold on power. Sound familiar?

Did writing the book require a lot of research into Israeli and Secret Service operating protocol?

With Israel, an article about Yamam—the ultra-secret, ultra-elite group of Israeli commandos, kind of like our Navy SEALs or Delta Force—had just run in Vanity Fair magazine when I was working on the book. I researched the Secret Service’s operating protocol, but I actually made up most of what’s in MURDER ON THE METRO. Here’s the thing about writing as many thrillers as I have over a long period: I end up making stuff up that comes remarkably close to the truth, because it’s a matter of experience and applying common sense. As Robert Louis Stevenson said, “It doesn’t matter to me if you believe what I’m writing is real, all that matters to me is that you don’t disbelieve it.” That’s the origin of the phrase “suspension of disbelief” and, man, do I ever rely on that!

Do you think it’s possible to stage a political coup in America today?

You sent me these questions before insurgents overran and ransacked the US Capitol Building, so little did you know how prescient your question would be. The greatest political thriller of all time, Seven Days in May, imagines just that and lays out its story in suspenseful, blow-by-blow form. But that’s fiction. If you’d asked me on September 10, 2001, whether I thought terrorists could attack the country with passenger jets, I would have said no way. Same thing with a coup. I thought there were too many safeguards in place, too many handrails to hold on to.

But none of that imagines a megalomaniac sociopath like Donald Trump. I’ve written a lot of villains over the years, but only a couple approach Trump’s villainy and utter lack of redeeming qualities. One of those was a pedophile, and even he wasn’t as bad as Trump. I think it comes down to one of the many great lines in The Usual Suspects where Verbal Kint (Kevin Spacey) explains to Dave Kujan (Chazz Palminteri) that Keyser Soze’s power doesn’t come from having more men or guns, it comes from having the will to do what the other side won’t and never expects you will either. Nothing Trump does should surprise us and yet, somehow, it still does.

How did you make the plot so fast-paced that readers don’t want to put it down?

It starts with approaching the Capital Crimes series the same way I approach any book: Open every chapter with a hook and end every chapter with a cliffhanger, then define every single scene by conflict and reveal something to the reader they didn’t know before. Every scene must tell a story in its own right, each with its own beginning, middle, and end.

That’s the general answer, but it’s even easier in a book like MURDER ON THE METRO because the stakes are so high. Everything builds to an incredible moment when, if Brixton and company fail, ten million Americans are going to die. That’s one reason I’ve never tried my hand at a domestic or psychological suspense thriller: no matter how much I’d like to write smaller, my instinct always makes me go bigger.