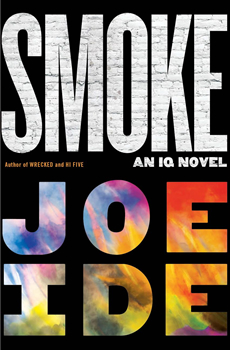 Joe Ide’s career as a novelist began with a splash most writers only dream of. IQ, the first in the crime series Ide characterizes as “Sherlock Holmes in the ’hood,” was a critically acclaimed bestseller. It won or was shortlisted for every major award in its genre, and the television adaptation sold a year before the book was published. So how does a 58-year-old debut author achieve such remarkable success? It would be easy to call it luck, but that would diminish the discipline and dedication it took Ide to get there.

Ide began his writing career as a screenwriter, which is where he paid his dues. Of those years, he says, “I worked for most of the major studios. I sold specs, did assignments, rewrites, and script doctoring. But none of my screenplays were getting made and that’s how you keep score in Hollywood. It got so frustrating I quit. I moped around for a while and then reality slapped me in the face. I needed to make a living, and my only marketable skill was writing. A novel seemed logical.”

Logical, perhaps, but not easy. While screenwriting taught him how to write crisp, compelling dialogue, structure and pace a narrative, meet a deadline, and handle rejection like a pro, it didn’t prepare him for the skills he needed to flesh out a novel.

“I know what good, clear prose sounds like,” Ide says, “and mine sounded nothing like it. It was humbling. I read things like On Writing Well, Elements of Style and Stephen King’s On Writing, and I took a course from the writers I admired. They were all on my bookshelves. Chiefly, Walter Mosley and Elmore Leonard—relatively simple prose, as opposed to, say, James McElroy and Daphne du Maurier. I didn’t read, I studied. I tried to understand how the great writers did it. Their syntax, word choices, vocabulary, the progression from one sentence to another, one paragraph to another, one idea to another. All the while, I’m writing—badly, at first. But as the pages piled up and time went by, I made progress. I’m good at being self-critical and my standards for ‘good, clear prose’ rose higher. It took a year before I was confident, and two more to develop my voice and finish IQ.”

IQ is not only the title of Ide’s first novel, but the aptly chosen nickname of his protagonist, Isaiah Quintabe. Isaiah is a high school dropout, a young African American man whose remarkable intellect and powers of observation are rivaled only by Ide’s literary inspiration, Sherlock Holmes. Isaiah relies on his wits and intellect rather than violence; he’s a man Ide often describes as “ethical, thoughtful, and just.”

Ide’s latest, SMOKE, is the fifth in the series. The book is full of fresh, evocative descriptions, like Billy couldn’t strong-arm anyone even if he wanted to. His body was like a stalk of steamed asparagus.

“I want the writing to be vivid,” Ide says, “to be entertaining on its own, separate and apart from other elements of  the story. Coming up with things like similes means applying myself and experimenting until something feels right. I don’t settle and I keep at it until I’m satisfied. For every word I keep, I throw five or six away. Counting words is an anathema. If I spend a whole day writing two paragraphs I’m fine, as long as they’re good paragraphs.”

SMOKE finds Isaiah on the run, his love life in shambles, his survival threatened by multiple LA gangs, and his thoughts haunted by the violence he’s seen. Tormented by PTSD and determined to leave detective work behind, he takes refuge in Coronado Springs, a small town north of Lake Tahoe. Unfortunately, it’s a short-lived peace.

While Isaiah grapples with his demons, his friends back home deal with their own problems: an ultimatum from a spouse, a blackmail threat from a long-ago one-night stand, a broken heart, and worst of all, the hole IQ’s loss has left in their lives. The result is a complex book with a lot of threads. Ide juggles them masterfully, weaving these individual stories into a single narrative about growth, loss, and remaining true to one’s deepest self. The characters feel like real people—and for good reason. Ide grew up in a rough East Long Beach neighborhood, and many of the characters in the series are inspired by the people he knew there.

It might seem unusual for a Japanese-American writer to choose an African American protagonist, but for Ide, it was a natural choice. In a 2017 interview with The Rumpus, Ide says, “As a kid, I didn’t know any Japanese kids that weren’t in my family. Japanese-American wasn’t a term I used or thought about. My friends were Black, and I co-opted their speech, style, attitudes, and musical tastes. My freshman year in high school I got transferred to a school in West LA. The student body was middle class, mostly White and Asian, with only [a] smattering of Black and Hispanic kids. It took me a year to make a friend.” When he sat down to write, he says, his friends from the neighborhood were the most memorable and meaningful.

Ide writes about timely and relevant social issues. Asked whether he  considers the possible reactions of readers and critics as he’s writing, Ide explains, “I think there’s a false dichotomy between writing for yourself and writing for your readers. Writing for yourself means just that. You’re writing to meet your own objectives. Writing for your readers means communicating those objectives in a clear and interesting way. Writing what you think your readers want is another thing entirely. It means anticipating how your readers feel about issues and writing what you think they’d accept. The slipperiest of slopes. Or maybe  you’re writing to fit a template because your previous book was so successful. Hard for me. I don’t follow an outline, I just write. The story goes its own way, whatever way that happens to be.”

While Ide’s books have serious themes, he sprinkles humor liberally throughout. “I don’t try to strike a balance or measure ingredients,” Ide says. “I try to be true to the characters. I have to ask myself, would the character really do or say this in this situation? Or is this a contrivance for my own convenience? If I feel I’m being ‘honest’ in that sense, I write wherever the character takes me, whether it’s serious or lighthearted.” He mentions a favorite scene, on page 69. “Dodson has a long monologue about the eccentricities of White people. I laughed while I wrote it.”

Of course, every author takes inspiration from other writers. Most can name at least one book that changed their lives. Ide’s unexpected choice was A. A. Milne’s Winnie the Pooh stories and poems. “I was transported,” he says. “I was a participant, a respectable citizen in the Land of Pooh. Milne taught me there were other worlds so much better than my own.”

Perhaps it was those idyllic days of Pooh that led to Ide’s avid love of fly fishing—the beauty of nature, the leisurely pace, the long, quiet hours on the river. A break, perhaps, from the mean streets his characters navigate. “Unfortunately,” Ide says, “avid does not mean good. I spend lots of time scaring the fish away, untangling fishing line from bushes and trees, and chasing my hat as it floats downstream.” Which is exactly the part Pooh would enjoy most.