An Origin Story Through a Different Light 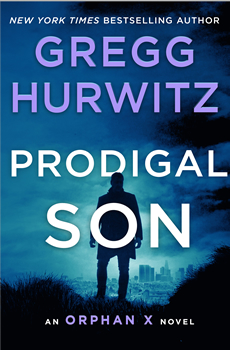 In the opening pages of PRODIGAL SON, Gregg Hurwitz’s sixth novel about the Nowhere Man, we’re taken back to Evan Smoak’s earliest days as a runt kid living in a Baltimore group home with a bunch of other misfits. Evan is bullied and alone, desperate for a way out. “This is the first time that I go back into the foster home,” says Hurwitz, a veteran novelist and screenwriter. “We get to see his origin story through a different light.”

This focus on Evan’s roots is woven all the way through Hurwitz’s latest novel, both in focusing on a pivotal time in Evan’s childhood and in the current case he faces as an adult. “What I wanted was a journey that would rip him back to his past,” Hurwitz says.

The stakes are higher than ever for Evan in the present day, too, as the world-weary hero settles into an early retirement. Evan makes the most of his quiet life, seducing women at upscale bars and watching old movies on his flat-screen TV. When his personal helpline rings, he lets it go without answering. After all, he’s moved on.

At least he hopes so.

But someone keeps calling his secret phone, and when he finally picks up, the caller makes a startling claim: she says she’s his mother. Evan may be skeptical, but Hurwitz always knew this day would come for his battle-hardened protagonist.

“When I first sold the series, I remember saying to my agent, ‘Look, it won’t be in book three or four, but at some point down the line, he’s going to get a call and it’s going to be from a woman claiming to be his mom.’ And it’s funny—my editor loved that, and my agent couldn’t wait for it. She kept asking, ‘When’s the one with his mom?’”

For Hurwitz’s agent and editor—as well as his loyal readers—the wait is finally over.

Summoned to Buenos Aires, Evan quickly slips back into his old ways, dispatching a pair of over-attentive bodyguards on his way to meet his mother, Veronica. She quickly turns out to be a stark contrast to her son, who is both average in appearance and extraordinary in his ability to fight. “The line I use about Evan in every book is that he’s just an ordinary guy—not too handsome,” Hurwitz says. “That’s always how I describe him.”

Veronica, however, is far from ordinary and comes from a very different world than Evan. “I thought his mom would be this sort of hyper-feminine, charismatic, glamorous, sensuous woman,” he says.

Taking on Evan’s relationship with his mother presented a unique challenge both for Evan and his creator, but as always, Hurwitz was up for it. “Every book I try and do something new. I try and stretch beyond what I think I’m capable of,” he says. “So if there’s not a certain amount of creative anxiety during the process, then I’m not doing my job well.”

As Evan tries to deal with the emotional weight of meeting his mother after all these years, he’s shocked when she asks him to do a job that will take him back to another part of his past: the foster home where he grew up. Veronica wants him to help out his old friend Andrew, who has witnessed a murder at the impound lot where he works and is now on the run. Evan wants to say no—he’s retired, after all—but his addiction to adrenaline and his desire to help people runs too deep.

“As he starts to unravel this intrigue, he has to go back to the source of all that young vulnerability,” Hurwitz says. Unlike most of the kids he grew up with, Evan went off as an assassin-in-training, which has both damaged him and given him tools that he’s used to make a better life. “And he’s got a bit of survivor’s guilt, right? Because he knows most of the other kids in that foster home are in jail, on drugs, or dead at this point. There’s also part of him that feels like that path in him is sort of dirty and shameful.”

In addition to the personal part of the story, Hurwitz also takes on a plot that deals with the cutting-edge technology of mini-drones that can swarm and attack. “There was a lot in this that I was trying to figure out. I have to coordinate his past, and I have to deal with military technology,” Hurwitz says. “I’m spinning a bunch of different plates in this one.”

Hurwitz has also been spinning a lot of different plates in his everyday life. Even as he’s focused on being a novelist, he has spent much of his time over the last year doing political work, teaming up with a group of fellow screenwriters to create political messaging. If that’s not enough, Hurwitz has an upcoming movie, Sweet Girl, which he co-wrote with an old friend, Philip Eisner.

“Philip showed me a draft of something in progress,” Hurwitz says of the script’s origins. “And I was like, look, this is really cool, but I think it’s 90 degrees off. I said, ‘I can give you all the notes and you can go off and slay and conquer and good for you, but if you want to do it together, you know. . .’ And so we kind of tore the whole thing apart and rebuilt it, like an engine.”

Their collaboration—a revenge thriller about a man and his daughter—has resulted in a film headlined by Aquaman star Jason Momoa, which is due out on Netflix later this year.

With a new novel to finish, a new movie idea that he and his writing partner have recently sold, and his role as co-president of International Thriller Writers, Hurwitz has plenty more to do, including finishing his latest Evan Smoak book. “I know that if I focus, I can get done what I need to get done,” he says. “Part of what I’ve realized is, I don’t focus on what’s coming out on the page anymore in terms of page count or even in terms of the story. I focus on what state I’m in, when I’m writing. If I can get to the right state when I sit down, then the story is going to work.”