Right Man in the Wrong Place 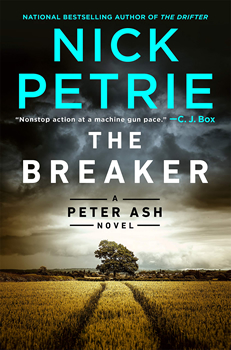 The right man in the wrong place—that’s usually the case with Peter Ash. In Nick Petrie’s new book THE BREAKER, we find his lead character lying low in Milwaukee, fixing houses with his friend Lewis, and living with his girlfriend June. But when a trip to the coffee shop ends abruptly when a man armed with a machine gun enters a market, Peter Ash jumps into action. The aftermath impacts his newfound quiet life.

Describing what the book is “about” is an uneasy task for an author who finds inspiration by giving himself assignments.

“For THE BREAKER,” Petrie says, “my assignments were to explore Peter and June’s relationship in more depth, and to explore the modern landscape of technology and the enormous power imbalance that comes with it. The result is a story about ambition and greed, the consequences of unchecked technology, and murder for hire, along with a significant dose of weirdness—I also wanted this book to be pure fun.”

Petrie enjoyed writing a great deal about June Cassidy into this book, her internal life as well as her work as an investigative reporter.  In a way, THE BREAKER is June’s story as much as Peter’s. Change in a series is inevitable in novels that take root in the real world, and after the events of the previous novel, we find the couple in a different place.

“In THE BREAKER,” Petrie says, “Peter and June are living in Milwaukee, just a few doors down from Lewis and his family, renovating houses and trying to see what the so-called ‘normal’ life might look like. Of course, Peter is not what you’d call a normal person. Some folks just aren’t made for that life—and as it turns out, June isn’t exactly normal, either.”

Keeping characters fresh is a major challenge in every book, but it helps that Petrie’s novels aren’t set in one place, and changing the characters’ circumstances helps to see them in a new way.

“I can’t imagine writing a long-running series where the scenery doesn’t change along the way,” he says. “I’m in awe of writers who can do that well.”

When it comes to research for a novel, one might say Petrie cuts against the grain. He doesn’t research but instead he follows his curiosity into whatever calls his interest.

“For example,” he says, “I’ve always been interested in technology and read about it regularly, so when I decided to write a novel about the intersection between technology and the growing power imbalance in society, I was already thinking about these issues. Along the way, however, as with every book, my vast ignorance becomes glaringly clear. That’s when I have to dive in and dig deeper.”

Another example is cycling, which features heavily in THE BREAKER. Petrie used to ride a bicycle during his years as a grad student in Seattle. He loved moving through the world on two wheels, rain or shine.

“I work at home now,” he says, “but I still run errands on that same old beater—the grocery store or library or coffee shop. I also have a mountain bike, and riding hard along a bumpy, winding single-track is the best way for me to lose myself and live entirely in the moment. It’s when I start thinking while riding that I get in trouble—a few years ago I made the mistake of trying to solve a problem with the book-in-progress and had a spectacular wipeout that required surgery and a year of rehab to get my shoulder back to normal. The surgeon told me it was like I’d been in a car accident—I was going pretty fast. I got back on that bike, though!”

As each novel must be a standalone, Petrie must strike a balance between introducing characters to new readers without alienating, or worse, boring fans of the series.

Petrie says he has two conflicting goals for the series: “For readers to be able to read the books in any order, and for there to be a longer character arc that proceeds from book to book. In order to do both those things, I decided early on that the Peter Ash novels would have only three continuing characters—Peter, June, and Lewis.  This means the characters can evolve, but I don’t have to spend a lot of time on backstory.  It also means that I have plenty of room to develop a handful of vivid new characters for each new book. These one-off characters have become one of my favorite things about the series, and I think they’re part of the reason the books have found so many readers.”

Even though Petrie is a full-time writer who’d already gotten used to working from home, he faced some work-balance challenges during the height of the pandemic. While his routine didn’t change much, he says he needed to develop a new level of discipline in order to reduce the intrusive distractions, such as bad news, that could drive anybody crazy.  He experienced a big difference when he began to leave the cell phone in a different room and blocking the internet on his laptop.

“The worst part, though,” Petrie says, “is that I don’t often get to meet readers and writers in person these days. In the past, I’ve invited a number of authors to my home bookstore, Boswell Books in Milwaukee, where I serve as their on-tour in-conversation partner/interviewer, and I really miss doing those events. I also totally crave bigger conferences like ThrillerFest and Bouchercon, where I get to meet new folks and see old friends.  Those are the things I’m looking forward to most, when this damn pandemic is over.”

Petrie is currently working on his next Peter Ash novel, this one set in rural Nebraska.