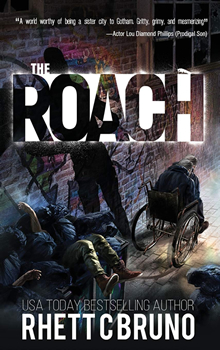 Five years ago, Reese Roberts was the masked vigilante known as The Roach, the guardian of Iron City—a fearless protector willing to do whatever it takes. That is, until a bullet in his spine paralyzed him from the waist down.

Now he’s a shriveled old drunk, living like a hermit and waiting for his life to end. But when someone steals his old suit and begins to patrol the streets and a new killer emerges, Reese knows he’s the only one that can stop him.

What is your view of the novel?

For me, the novel is a deep dive into the history and psyche of what might drive a man to become a ruthless masked vigilante. There are also elements of dealing with life-changing trauma, both in the past and in the present, and how it shapes us. His “job,” his purpose, his legs—the Roach is a man who’s lost everything down to his very identity. I think that’s something a lot of people can sympathize with.

THE ROACH has an intriguing premise. What can you share about the story’s origin?

The idea originated in a short story I wrote for an anthology. I wanted to deconstruct the superhero/vigilante genre and write about a man who feels like he could be a real-life vigilante. To get in the grit and the grime with it. To me that meant portraying this vigilante at his weakest. He’s not learning to be a hero, or in the heart of his crime-fighting career. He’s already broken and now has to live with the things he’s done. It isn’t a story of redemption. Reese Roberts already knows exactly who he is. He just needs to come to terms with it. 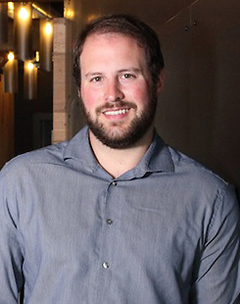 Is The Roach character based on, or paying homage to, any particular superhero?

There are influences for sure, both unconscious and purposeful. He’s sort of an amalgam of the more street justice heroes. Equal parts Punisher and Rorshach, and a little Batman. But I would say the main inspiration for the story are the first four episodes of Daredevil, Season 2. Those great scenes where Daredevil and Punisher argue about their world views, then sort of come to understand each other. The Roach is that conflict all bundled up inside of a single person. He wants to save people and do good, but he isn’t good himself. And as ghosts from his past come forward, he’s going to have to come to terms with it.

How was the process of designing a new superhero?

Not easy, ha! There aren’t that many other books to look at for inspiration. It doesn’t seem to be as popular a genre in books at it is in other mediums. But to me, this is just as much a thriller / mystery novel as it is a superhero one. There are no powers. Costumes. The Roach dresses like a crazy person wearing a gas mask. He’s meant to feel like he could really be out there on the city streets, as nothing is special about him beyond his rage. So it’s a thriller starring a vigilante. The main character just so happens to have been formerly a masked hero like you could find in a Watchmen or DC Universe. In the present, he’s just a bitter aging guy in a wheelchair.

Are you a DC or Marvel fan?

Probably DC. I just always felt they had more compelling villains. In comic stories, a well-developed villain really sets things apart. Which is interesting in that while Reese does have an enemy to chase after, he isn’t really a comic-book-feeling villain or anything. That’s likely because it’s set up as a thriller, but also because The Roach’s villain is undoubtedly himself.

Why do you think we need a new hero—maybe even more than ever?

The genre has been cram-packed in movies and TV. I’m sure many think the genre is tired, or growing stale. But hits like The Boys and even Umbrella Academy prove that the interest is still there. People just want new looks. I found the idea of a first-person perspective really exposing The Roach’s darkest thoughts to be a new spin. This isn’t just Rorshach’s journal. This is him. And for every heroic thought he has, there’s one that would send a chill up your spine. Imagine the type of person that would dress up and go out looking for criminals at night? In real life? I think that is someone readers would want to see.

The biggest aspect was that I had to work with a few wheelchair-bound readers and a sensitivity reader in order to help me make Reese’s condition and day-to-day actions feel as authentic as possible. I also spoke with a few police officers to help with that to a lesser extent. But a lot of what the book is about beyond that is very close to my heart. Reese suffers from a mental illness that I too deal with, which remains unspecified in the book. The city draws from a lot of what I learned about in architecture school. And of course, years of comic book and thriller related materials, from books, to movies, to comics.

Roughly, where would you place Iron City on the map?

Iron City is most directly based on Detroit. But it really could be any Rust Belt city that lost its industry and had to find a new identity.

This is a pretty dark book, but in the end it proves that there’s hope for everyone. We just have to learn how to adapt to our situations. But it also touches on issues of child abuse. In the end, it’s a story about what would really happen to a kid who grew up in a situation like Bruce Wayne.

He has been writing since before he can remember, scribbling down what he thought were epic stories when he was young to show to his friends and family. He is currently a full time author living in Connecticut with his wife and dog Raven.