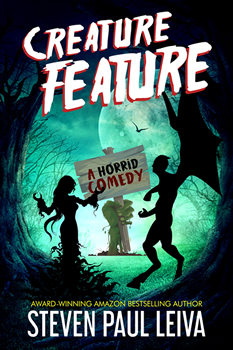 It is 1962. Kathy Anderson, a serious actress who took her training at the Actors Studio in New York, is stuck playing Vivacia, the Vampire Woman on Vivacia’s House of Horrors for a local Chicago TV station.

Finally fed up showing old monster movies to creature feature fans, she quits and heads to New York and the fame and footlights of Broadway.

She stops off to visit her parents and old friends in Placidville, the all-Ameican, middle-class, blissfully normal Midwest small town she grew up in—but she finds things are strange in Placidville.

Kathy’s parents, her best friend from high school, the local druggist, even the Oberhausen twins are all acting curiously creepy, odiously odd, and wholly weird. Especially the town’s super geeky nerd, Gerald, who warns of dark days ahead.

Has Kathy entered a zone in the twilight? Did she reach the limits that are outer? Has she fallen through a mirror that is black? Or is it just—just—politics as usual!

Author Steven Paul Leiva spent a few minutes with The Big Thrill for a rapid-fire discussion of his latest novel, CREATURE FEATURE: A HORRID COMEDY: 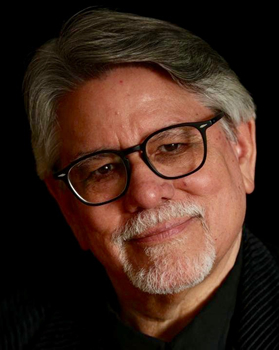 It’s a spoof and a satire, so it upends many conventions. Especially political conventions!

It probably doesn’t. If anything, it probably subtracts from it.

Ian Fleming for being a supreme entertainer while writing evocative prose.

W. Somerset Maughm for showing me how prose can create palpable experiences.

Why did you write this book?

Because I find politics to be an unbalanced combination of horror and comedy. I wrote the book to try to bring some balance to it.

A refugee from the silly fields of Hollywood where he cavorted with such luminaries as Bugs Bunny and Betty Boop (although the latter was but a brief affair), Steven Paul Leiva has authored seven novels and one novella since 2003. His work has been praised by literary great Ray Bradbury, Oscar-winning film producer Richard Zanuck, NY Times bestselling author Diane Ackerman, Hugo & Nebula Award winner David Brin, and Star Trek actor John Billingsley. He has received the Scribe Award from the International Association of Media Tie-in Writers. A traveler among several genres, his books include his witty Hollywood thrillers, Blood is Pretty and Hollywood Is an All-Volunteer Army, his novelization of the indie family film, the Scribe Award-winning The 12 Dogs of Christmas, his sci-fi satire of first-contact told from the point-of-view of the aliens, Traveling in Space, his comic look at happy-ever-afters, By the Sea, his surreal political fantasia, IMP, his bizarre, possibly audacious, somewhat sci-fi novella, Made on the Moon, and his latest, Journey to Where, a contemporary “scientific romance” written in the tradition of H.G. Wells and Jules Vern.