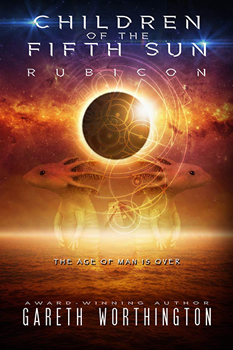 On the surface, the third instalment in award-winning author Gareth Worthington’s Children of the Fifth Sun series—RUBICON—is an action-packed, globe-hopping science thriller. But Worthington hopes readers also pick up on the novel’s ominous underlying message.

“Ultimately,” he says, “I’d like people to understand that if we don’t learn from our past, we are doomed to repeat it. In addition, for readers of the whole series, I wanted to convey that we all have an impact on the world and people around us, even after we are dead. So think about your actions now.”

Those concepts are certainly top of mind for KJ Nilsson, and a group of Nenets children collectively known as the Stratum—half of which were abducted in the previous novel, Echelon, by a clandestine group called the Nine Veils.

Despite 17 years of searching by Jonathan Teller and the NSA, no one has heard from the kidnappers or the abductees. It would seem the remaining children and their leader would be safe to come out from hiding, especially to accept presidential recognition that each of them is a unique, symbiotic race, and legal citizens of several great nations.

The Nine Veils have also come out of hiding, now with their own army, and are determined to become the most elite power on the planet. Now, KJ and the Stratum must prove they deserve their new status by defending the citizens of Earth—against their own kind.

“I love combining science with mythology in thrillers,” Worthington says, adding that he leans on his background in marine biology and endocrinology to bring some of the scientific details to life. “I grew up watching Indiana Jones on the one hand, and movies like The Firm on the other. For me, it’s all about making it almost possible.”

As Jonas Saul—bestselling author of the Sarah Roberts series—says, “This author took a global look at America, China, and Russia, and added a species from another era into the mix, to create a well-researched novel of suspense, intrigue, and dashing individuals. The characters travel the world on a unique mission while trying to stay out of the line of fire as rogue government agencies from several different countries try to stop them. It’s a wild ride from California to Peru, from Egypt to Siberia. The amount of research put into this novel is on par with a Michael Crichton novel.”

This kind of praise is met with deep relief—while not his only published works, Worthington has been picking away at this trilogy for a long time.

“This is the final in a book series that took me nearly 20 years from concept to finishing,” he says. “It’s a very personal story, which takes the reader through a darker period in my life, through to the birth of my children, and the complete transformation that came with that.”

Worthington is used to change. While he always wanted to write, he is an authority in ancient history, has hand-tagged sharks in California, and trained in various martial arts. He currently works for the pharmaceutical industry educating the world’s doctors on new cancer therapies.

Gareth Worthington holds a degree in marine biology, a PhD in endocrinology, an executive MBA, is board certified in medical affairs, and currently works for the pharmaceutical industry educating the world’s doctors on new cancer therapies.

Gareth is an authority in ancient history, has hand-tagged sharks in California, and trained in various martial arts, including Jeet Kune Do and Muay Thai at the EVOLVE MMA gym in Singapore and 2FIGHT Switzerland.

Born in England, Gareth has lived around the world from Asia to Europe to the USA. Wherever he goes, he endeavors to continue his philanthropic work with various charities.