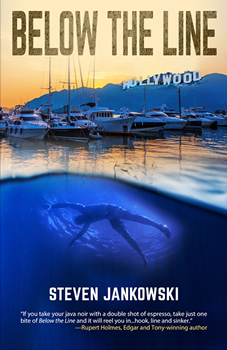 He may not have been a puppet, a pauper, a pirate, a poet, a pawn, or a king, but Steve Jankowski has done pretty much everything else in his career. Primarily a screenwriter for the past few decades, he’s now trying his hand as novelist—and BELOW THE LINE is an impressive debut.

His protagonist, Mike Millek, pays the bills working as a Hollywood movie teamster while moonlighting as an armed chauffeur to the stars, scrambling to make a few bucks to keep his head above water. One night, Millek, on his way to meet with a deadbeat client—rap music producer Pays Lee—to collect on a long overdue payment, he finds his client dead, still holding onto a satchel filled with cash. Thus begins a Hollywood tale where everyone’s on the make and everyone has secrets to hide.

In this interview with The Big Thrill, Jankowski shares the not so straight path he followed that finally took him to writing this first novel.

I grew up in the Bronx, the youngest of four with three older sisters in a middle-class family. We weren’t well off by any stretch of the imagination, but my parents always made sure we had food on the table. Until I was five, we lived next door to [Black activist] Stokely Carmichael, and I used to play with his younger brother. My father was an electrical engineer who never attended college. He worked for a spell at Bell Laboratories before moving to Ma Bell where he was kind of a DC power expert. My mother went back to work when I was around 10, which I believe lead to my downfall as a good student. Lacking any after-school adult supervision, I learned to get by with minimal effort. My sisters were all goodie two-shoes girls, and I became sort of the outcast, and later the prodigal son. Because I was the only male sibling, I became the quiet one (couldn’t get a word in edgewise with three sisters) and so I became kind of introverted, daydreaming and creating stories in my head.

I wasn’t a very studious kid, particularly after my mother went back to work. Eventually, I ended up at Christopher Columbus High School, the same high school Sal Mineo, Anne Bancroft, and serial killer David Berkowitz (“Son of Sam”) attended. By then I was already hanging out and learning a lot more on the street corner with my so-called “hoodlum” friends, all older than me, smoking, drinking, and causing trouble.

What were some of your early jobs?

I started my career in show business doing stage work for rock concerts in and around NYC. This led to a variety of jobs in the concert music business until I went back to college 10 years later. I loved the life of sex, drugs, and rock and roll, but as I was fast approaching that dreaded age of 30, I started seeing my peers losing their hair, their teeth, some their lives, and thought maybe I should go back to school and make something of myself.

Pretty much every job I’ve ever had has influenced me in some way. I was a stagehand, a truck loader, a musical instrument technician and delivery guy for a musical rental house. I did back stage security at the Palladium and Dr. Pepper Central Park Series. I was a local NYC roadie for hire for up and coming bands playing the many clubs and venues around the city. I worked as a doorman at Trax and Adam’s Apple (a couple of NYC night clubs). I was a messenger for NYC impresario Ron Delsener, road manager, lighting designer, and production coordinator for Rupert Holmes during his Pina Colada days.

One time, while working at the Palladium, the Saturday Night Live Band was appearing. This was probably during their first or second season, and I had never seen the show. There were a bunch of people hanging around on the stage during sound check and the Stage Manager barked at me to get everyone one off the stage with exception of the band. One guy gave me a hard time and said, “But I’m John Belushi!” to which I replied something like “So, fuckin’ what, get off the fuckin’ stage.” It wasn’t until I saw “Animal House” months later that I was like, “Hey, that’s that guy I threw off stage!”

How did you wind up in Hollywood as a screenwriter?

At 27 I enrolled at Hunter College of the City University of New York not knowing what I was going to do or major in, but suddenly I became an “A” student. I was like a sponge and absorbed all those required classes I would never have signed up for on my own. Subjects like cultural anthropology, geology, Spanish, and Russian literature suddenly became very interesting to me and I was thoroughly enjoying being back in school. I’ve always leaned toward the performing arts, so I started taking theatre and film classes. I was always a movie buff, so I decided to major in film and eventually screenwriting, which led to meeting a professor who was involved with the Eugene O’Neill Theatre Center and the early days of the Sundance Institute. I spent a few summers working as crew at the workshops at both of those places. It was at the Sundance June Filmmakers Lab where I first met my future writing partner, John Shepphird, and my eventual writing mentor Frank Daniel. Eventually, I was accepted into his graduate screenwriting program, and moved to Los Angeles with about $1,200 to my name.

Like everyone who goes into film, I really wanted to direct. But film was and is a rich kids’ game, and I was no rich kid by any means. Shooting film was expensive. I remember hearing stories about film students spending $40,000 on their thesis films. I couldn’t do that, so I decided to try to get into directing through screenwriting.

Most of the pictures I wrote were for low budget, straight-to-video, late-night cable TV markets. Our first film “Teenage Bonnie and Klepto Clyde” was my writing partner John Shepphird’s idea. He sold me on the idea that to jump start our careers we just had to get something made and not linger in development hell like so many other screenwriters. I agreed. So we sat down at the House of Pies in Los Feliz and drew out a very simple outline for “Teenage Bonnie and Klepto Clyde” feeling very confident that we could get it off the ground with someone like Roger Corman. Roger turned it down. We sent it to a couple other producers, one being Menahem Golan formerly from famed Golan-Globus Canon films. Menahem didn’t read it right away but his development guy convinced him he should make it.

Why is BELOW THE LINE a novel and not a screenplay?

Deep down, I always wanted to try my hand at a novel. I’ve always loved the noir genre, so I decided to write it in the first person through the voice of the main character, Mike. This was something I never got to do while writing screenplays, so I thought it would be an interesting challenge. The story itself was a germ of an idea that I had for a screenplay about a limo driver who picks up his crooked client from a private airport while performing some illegal activity. I decided to “write what I know,” so I tapped into my years in the movie and music business. I always liked the theme of an ordinary person being thrust into an extraordinary situation. I always like it when someone becomes the unlikely detective because they’re forced to.

Tell us a little about Mike Millek.

Millek isn’t really based on any one person in particular. He’s sort of a combination of perhaps many people. Sure, some of his experiences mirror mine. For instance, I did take a sabbatical years ago from the film business for a few months and sailed to Tahiti on a 42-foot sailboat. But I didn’t do it alone. I had a friend in junior high whose father had a sailboat and took me out on it once or twice in the Long Island Sound off City Island. It had a profound effect on me, feeling the power of wind take us along. I have, however, read many sailing yarns about solo sailors and thought I could talk about that as a life experience for Mike.

What’s the difference between screenwriting and novel writing?

The main difference is that screenplays aren’t really meant to be read. They’re blueprints for a film and they’re meant to be watched and listened to. Novels are meant for reading. It’s about conjuring up those pictures in a reader’s mind through the written word. Naturally, in both you’re creating characters, describing them, and giving them dialogue. But in novels you can get into their heads and tell the reader what they are thinking. You can’t really do that with a screenplay unless you give them voice-over, which I think is sort of a crutch in screenwriting.

I have such eclectic tastes in my reading. But I will have to say Michael Connelly and lately John D. MacDonald would have to be up there. I will also say that as far as influence goes my screenwriting partner and Down & Out author John Shepphird has been an enormous influence on me, as well as an inspiration. Adding to the list would be Rupert Holmes, James Ellroy, Jim Thompson, Tristan Jones, Sterling Hayden, Mikhail Bulgakov, Alexander Kent, John Kennedy Toole, Hunter S. Thompson, and all for different reasons.

I’m already outlining the next in a Mike Millek series. I’m also working on what I feel are a couple of my better screenplays, turning those stories into novels.

Steven Jankowski was born and raised in The Bronx, NY and spent most of his adult life hustling a living in the entertainment business. He spent the first ten years out of high school working as a stagehand in the 1970s NYC rock & roll music scene, and on the road as a band roadie and road manager. In the mid-‘8os he returned to school to study film at Hunter College, and then moved to Los Angeles to earn his MFA in Screenwriting at USC. Since then Steve has written or co-written over 30 screenplays, with nine of them having been produced.

In the spring of 1999, Steve took a sabbatical from work to sail a 42-foot boat from Los Angeles to Tahiti with three other people. Steve continues to write for the screen and sails his 34-foot Catalina sailboat whenever he can.