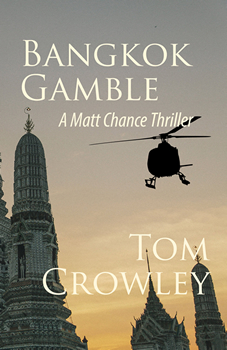 Kidnapping, international trafficking on the dark web, bit coin blackmail by gangster police states, loan sharks, and a monk obsessed with profit and power are all in the mix.

When Matt Chance is asked by a Bangkok gambling kingpin to investigate the kidnapping of his daughter, he’s not interested. That is until he learns that his mentor, former Special Forces soldier John Scales, already on the case, has disappeared. On the trail, Matt confronts Jade Lee, an ex US Army chopper pilot who joins the chase.

Their attempt to rescue the girl and capture the monk in charge of the criminal cult appears to be a failure until the CIA joins the picture in the form of Matt’s older brother Rick. Offered the chance to take part in a covert operation in Macau, where the monk has fled, Matt and Jade agree to go. The risk is great, the territory unknown, but it seems the only way to rescue the girls and get the mad monk.

Author Tom Crowley stopped by The Big Thrill for a quick chat about his latest crime thriller, BANGKOK GAMBLE:

I had the character in mind but it was the plot which drove the book in the early stages.

Discovery of a part of the world and people who they would otherwise never encounter.

I read to escape, and I think there is a great audience for well written adventure/escape literature.

Tom Crowley’s origins are in the Midwest American town of Milwaukee, although virtually his entire adult life has been spent living in Asia in positions with the military, diplomatic corps and business until the Asian financial crash of 1997. Living in Thailand at that time, he decided to explore a different path in life and volunteered at the Mercy Centre in Bangkok, an NGO working to shelter and educate street children. Tom has continued with the foundation to this time.

His writing reflects his varied experiences living and working in Asia. He divides his time between homes in Kensington, Maryland and Bangkok. His recreation is competing in pool tournaments and league play. His two adult children and wife reside in the US.