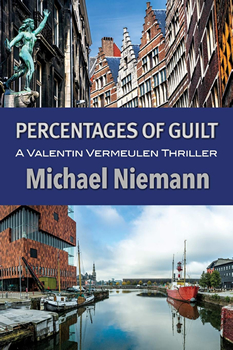 William Faulkner famously wrote, “The past is never dead. It’s not even past.” In Michael Niemann’s PERCENTAGES OF GUILT, his fifth international thriller featuring UN investigator Valentin Vermeuelen, our hero discovers just how true that can be. Vermeulen is called back to his former job in Antwerp to answer the prosecutor’s questions about his possible involvement in the murder of an informant back in 2002.

Just as in real estate, international thrillers rely so much on location. Why did Niemann choose Antwerp for his latest novel?

“The choice of Antwerp,” he told me, “has its roots in my short story ‘Africa Always Needs Guns’ in which Vermeulen made his first appearance. I always knew I wanted to write crime fiction with an international bend. Although the golden age of the spy novel was over, I knew I could write other stories. At the same time, I didn’t want a character whose personal motives would invariably get mixed up with his nationality. I didn’t want a James Bond who did what he did for Queen and Country. So I chose a protagonist who came from a small country. I grew up not far from Belgium, so that seemed a good choice.

“Antwerp became Vermeulen’s hometown because it’s one of the largest ports in continental Europe. Port cities all over the world are the interface between their hinterland and the world. By the time I had written four Vermeulen novels, I felt the urge to bring him back home. I have to admit I only visited Antwerp after I had already started the novel. I’m glad I did. It’s a lovely city with very diverse populations and a long history and plenty of crime.”

PERCENTAGES OF GUILT has two narratives taking place in two different time periods. What challenges did this create, and what keeps the reader focused during the shifting chronology?

“That was quite the challenge,” Niemann says. “I tried several tricks. At the beginning, I had set the past in a different tense than the present. That seemed clumsy, and the feedback I got affirmed that. I thought of writing the past in italics. Another clumsy idea. Yet another trick would have been to use headings. In the end, my publisher and I agreed that it would be best to simply use short references to ensure that the reader knew in which timeline they were.”

As noted earlier, this is the fifth Valentin Vermeulen novel, and it’s interesting to know how the character has changed over the years.

“I couldn’t have written this novel earlier in the series,” Niemann says. “I know it sounds corny, but I simply didn’t know Vermeulen well enough then. I used to roll my eyes when I heard authors talk about how their characters did unpredictable things. I thought, ‘We create the characters, so they do what we want them to do.’ Writing this series, I have seen Vermeulen develop in ways I couldn’t have predicted five years ago. He’s become more complex, more nuanced in his demeanor and actions. By the fifth book, I felt I knew him well enough to write about his past.

“The cryptic references that appeared in the first four novels,” he says, “had finally added up sufficiently to tell his story. I don’t think these changes mirrored those in my life. Two years ago, a personal tragedy transformed my life. Writing Vermeulen stories along his own trajectory was one of the ways that kept me going.”

Niemann also writes nonfiction. What are the similarities—and differences—between the two forms?

“For me,” Neimann says, “the obvious similarity is research. In that way, academic writing and fiction are very similar. When Graham Greene or Eric Ambler wrote their novels, they could make up a lot because the ordinary reader had no means to check up on their locations. Who had the means to check on streets in Constantinople in the 1950s? That required a trip to the library. Today, everybody has a phone that can pull up any city at a moment’s notice. So made-up stories set in real contexts require those contexts be described correctly.

“While nonfiction writing has long chosen an impersonal or even passive style as a way to keep the author’s voice at bay, that has also changed. The best nonfiction writing these days puts the author’s voice front and center. I think of Michael Pollan’s book The Omnivore’s Dilemma as a great example of using the personal to highlight the more abstract, economical, and political. There is one huge difference that makes fiction so much nicer to write: no footnotes.”

When asked to name some of his literary influences and recommend a few authors who could show aspiring thriller writers how it’s done, Neimann says, “I read widely in and outside my genre. My earliest inspirations were John le Carré and Len Deighton. Growing up in Germany, the Cold War was real in an everyday manner. British fighter jets flew overhead constantly, and there was a Belgian anti-aircraft missile battery right next to the bike path I rode to school. Spy fiction gave some context to those daily experiences.

“Since then I have enjoyed many a Jack Reacher novel simply because Lee Child is one of the few authors who still can make me stay up late to finish his novel. There’s Elmore Leonard, whose dialog crackles with this crazy mix of humor and dread. I’m also drawn to writers from the African continent, whose stories continue to surprise and delight me for their unique takes on life. There’s Mukoma wa Ngugi, Leye Adenle, and Kwei Quartey, who all write great crime thrillers. But also Tsitsi Dangarembga and Chimamanda Ngozi Adichie, whose literary fiction is outstanding.”

Finally, I asked him to put together his dream ThrillerFest panel; the writers need not be living to participate.

“I had to think about this question.” Good. “As much as I love writing crime fiction, I’m also aware that there is a conservative streak that permeates the genre. Not in terms of the ideology of the writers, but in the manner in which we structure our novels. Evil is defeated and normality is restored. Yes, the protagonist is a different person at the end, but society at large remains the same. There’s hardly ever a novel that asks if normality should be restored. If there’s anything we’ve learned from 2020, it’s that there’s a host of conditions, in this country and elsewhere, that don’t deserve to be restored. So I would create a panel consisting of Namwali Serpell, Rachel Howzell Hall, Attica Locke, Helon Habila, Mohsin Hamid, and Walter Mosley. The topic would be Can Crime Fiction Be Emancipatory?”

Award-winning author Michael Niemann has long been interested in the sites where ordinary people’s lives and global processes intersect. He’s shared umqombothi with shack dwellers outside Cape Town, interviewed Morgan Tsvangirai, former Prime Minister of Zimbabwe, when he was still a trade union leader, and has seen Eduardo Mondlane’s dorm room at Northwestern University, faithfully recreated at the Museum of the Revolution in Maputo.

His thrillers featuring UN investigator Valentin Vermeulen are published by Coffeetown Press. Legitimate Business and Illicit Trade were published in 2017. Illegal Holdings came out in 2018, and No Right Way went on sale in 2019. Illegal Holdings won the 2019 Silver Falchion Award for Best Thriller at Killer Nashville. The fifth Vermeulen thriller, PERCENTAGES OF GUILT, is due for publication in 2020.

His short stories have appeared in Vengeance, the 2012 Mystery Writers of America anthology edited by Lee Child, and Mysterical-E. Africa Always Needs Guns, Big Dreams Cost Too Much, and Some Kind of Justice are now available as Kindle singles.