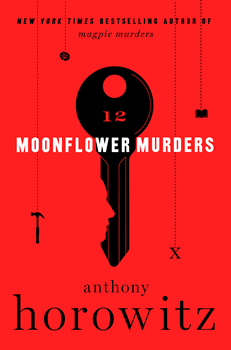 What if you suspected a man has been convicted of a crime he didn’t commit? And what if a popular novelist confirmed your suspicions in a novel based on the same case? You can’t get more meta than that, can you?

But Anthony Horowitz gives the screw another turn in his latest release, MOONFLOWER MURDERS.

The novel opens two years after the events of last year’s Magpie Murders to find former editor Susan Ryeland  running a struggling bed and breakfast in Greece. That is, until the Trehernes come to stay and offer Susan a generous fee to help search for their missing daughter, whose disappearance might be connected to one of Susan’s authors. It seems the late writer Alan Conway may have left clues buried in one of his novels about a crime that happened in the Trehernes’ business (another hotel, coincidently), and the Trehernes’ daughter disappeared just after reading Conway’s book.

Sound complicated? Horowitz admits it wasn’t an easy novel to craft. He’d considered Magpie Murders a one-off, until his publisher asked for a sequel. Horowitz recalls spending days and nights working out how to play the same trick from the first book in a whole different way. “I think the book took longer to plan than to write,” he says.

And while the first book needed [spoiler alert] Alan Conway to die, bringing him back wasn’t very difficult because, as Horowitz puts it, “Writers are actually immortal…at least, they’ll survive for as long as anyone is reading them.” 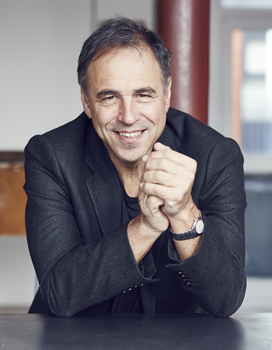 But what led to the original idea?

Phobias work in funny ways sometimes. Horowitz has always feared dying before finishing a book—so much so that he leaves notes to his wife with the novel’s solution. This fear led him to think about a book with a central character being an author who died before his latest novel was completed. This gave way to the idea that became Magpie Murders—and MOONFLOWERS MURDERS follows the same technique. After a fashion.

“It was vital that, having decided to write a sequel, it should be completely different,” Horowitz says. “This time, for example, the book-inside-the-book would be finished. And it would have to provide the solution in a novel way.”

Of course, some research was required—a process Horowitz finds fascinating. The thrill of discovery is inherent in his stories.

“All research surprises me, and that’s the pleasure of it,” he says. “I love including ‘true stories’ inside my fiction just as I think truth should underpin everything I write. I particularly enjoyed describing the death in the book-within-the-book. I think it turns on a fact that has never been used in murder mystery before.”

The book-within-the-book is Atticus Pund Takes the Case. It’s presented halfway through MOONFLOWER MURDERS—and it comes with glowing blurbs from real-life authors.

“I want to thank all the writers who provided blurbs for the book-within-the-book,” Horowitz says. “It’s lovely how collegiate other writers are, and I should add that so far nobody has ever turned me down. But then again, I only approach writers I know or whose work I admire.”

Horowitz’s writing process is pretty straightforward, from start to finish, in the same way readers are likely to read the book. Using different forms of writing, from emails to text messages, is a structure that he enjoys. Early on in MOONFLOWER MURDERS, for instance, a chapter is written in the form of email exchanges between several characters.

“I’m very glad I didn’t give any real email addresses away!” he says. “The book I’m writing at the moment even has a Wikipedia entry—with built-in clues.”

MOONFLOWER MURDERS pokes fun at writers and the publishing industry, and even plays on every aspiring writer’s fear about a published author stealing a plot or idea from an unknown. The author had ulterior motives for including those elements in the book.

“There are two books I love: Adventures in the Screen Trade by William Goldman and On Writing by Stephen King. I’ve always wanted to write a book about writing—after all, it’s something I’ve been doing professionally for 40 years—but I decided to do it as fiction and definitely with my tongue firmly in cheek,” he says. “Writers can take themselves very seriously, but I hope I never have. I really enjoy poking fun at the whole industry and some of the characters I’ve met within it.”

In other recent news, Horowitz has been named the new international vice president for the International Thriller Writers.

“My own feeling that in a time of huge uncertainty and fear for the future, when we are surrounded by fake news and don’t know who to trust, mystery writing is both a wonderful refuge and a great solace because it always deals in absolute truths. Who did it? How? Why? All these questions are answered and you leave the book with a sense of total satisfaction,” Horowitz says. “I was delighted to be invited to become VP for the ITW because I love the genre and its many practitioners. Crime writers are lovely people! I hope very much to be able to use my role to reach out to crime writing enthusiasts—but also to support and encourage new, young writers to develop their talents.”