As they say on TV, the next guest needs no introduction. Give a great big welcome to audiobook narrator extraordinaire Johnny Heller. He was honored as an AudioFile Golden Voice in 2019, and  you’d be hard-pressed to find an audiobook fan who hasn’t listened to at least one of Johnny’s many performances, which span the genres from kids’ stories to serious nonfiction.

Heller has an ability to perfectly establish the mood and setting of an audiobook, and a knack for distinguishing characters through vocal tics and pacing. Finally, he’s a master at delivering humor and seems to know when to punch it up or let it slide under the surface for a slow impact.

What is the one thing you wish you knew before you recorded your first book?

My journey and growth in this art have been long, and I know things now, both about performance and the business, that I couldn’t possibly have known way back when. That being said, I always tell my students that the narrator’s job is to be a conduit for the author’s truth. I think I wish I understood that—that process—better when I began. I am now fairly convinced that the listener, like the reader, sees the scene the author wrote and is taken into the author’s world as though viewing a film. So the narrator, in a sense, is a cinematographer, letting the listener see what the author wants them to see at a specific time and place, and no more.

I also wish I knew that I talked too damn fast! No one can see the scene if I’m speaking in fast-forward! Claudia Howard of Recorded Books helped me greatly with that issue.

What genre will you always say yes to and why?

I will say yes to noir or history/politics almost every time, assuming the scheduling works. I am a history buff (I majored in American history and political science), and I read military history and presidential bios in my spare time. As for noir, it’s my favorite genre to narrate, read, watch on film, or chat about. It’s such a cool world, and I think I would’ve fit right in—although I bet I would’ve been winged by a gat in the first chapter. I would love to do all the Nero Wolfe mysteries on audio.

Oh! And humor! Of course, funny is so subjective, but I do love to laugh and to make others laugh. My hero remains Groucho Marx.

I think most people know that I have a fairly extensive background in theater and in stand-up comedy, but my first really cool job was as a reporter for the Chicago Suburban Sun-Times. I did sports, features, news, reviews, and cartoons. It was a great job and maybe the only other one besides what I am doing right now that made me happy.

What do you never wear in the recording booth?

I always say: “Never ever wear a full suit of knight’s armor while recording. The gauntlets are too noisy and it can really get hot.” Also, no Speedos. Different reasons but still icky, especially if you are in a publisher’s studio. 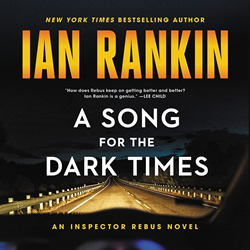 A SONG FOR THE DARK TIMES

James Macpherson is the perfect narrator for the latest Inspector Rebus mystery. His rich Scottish brogue immediately transports the listener to the wilds of Scotland while creating a wonderfully curmudgeonly Rebus. After Rebus gets a phone call from his daughter, Samantha, to say her husband is missing, things quickly get complicated when Samantha becomes a suspect in the disappearance and another murder inquiry is being investigated by his old team in Edinburgh. 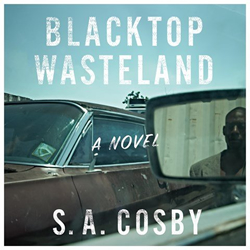 By S. A. Cosby| Read by Adam Lazarre-White

Narrator Adam Lazarre-White’s performance is an example of how the best audiobooks deliver pure storytelling. The beats of this gritty thriller may be familiar, but the atmosphere feels real, the characters are alive, and the emotional impact is undeniable. Crosby’s story, set in rural Virginia, is gripping. Beauregard is a family man, a husband and father. Running a car repair garage, he’s facing financial deadlines as his business loses customers to a competitor. He’s also an expert driver, with skills ideal for driving getaway cars. 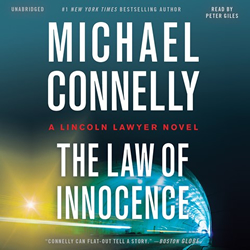 THE LAW OF INNOCENCE

Peter Giles, who has become the voice for Mickey Haller in the Lincoln Lawyer series, returns to take listeners on a powerful legal roller coaster ride. What could be more dramatic than Haller defending himself against a murder charge while having to prepare for his trial in prison? Giles masterfully conveys the fear and frustration that Haller experiences facing the prospect of conviction while his team, including Harry Bosch, works on finding the real murderer. 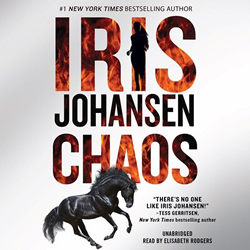 Narrator Elisabeth Rodgers’s faultless accents and inflections make each of the characters in this audiobook fully believable. Johansen’s new mystery introduces CIA agent Alisa Flynn. The story starts when a group of schoolgirls in Africa is kidnapped by terrorists seeking ransoms. Flynn’s ward, Sasha, is among them. The titular “Chaos” is a barely tamed racehorse who will allow only Sasha to ride him—and ride him she must, to save him and herself. 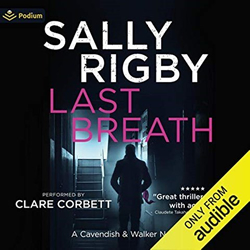 Narrator Clare Corbett flawlessly creates the accents and setting of Lenchester, England, while introducing Detective Chief Inspector Whitney Walker and her polar opposite, psychologist Georgina Cavendish. Listeners will be intrigued by Corbett’s portrayal of Walker, who is compassionate and skilled at questioning both timid witnesses and hardened suspects. The experienced Cavendish is sometimes harsh and humorless. The pair investigates a copycat serial killer.