Sinister Suspense at the Witching Hour 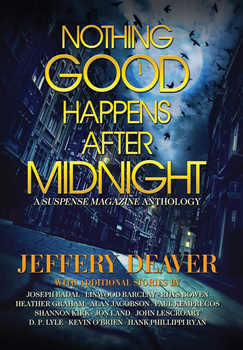 Everyone knows the most sinister things happen after midnight.

Jeffery Deaver has curated a volume of “suspense stories describing incidents of the curious, the eerie, the disturbed, the violent that occur in that netherworld after the witching hour.” The authorial skills and twisted content will remind readers of Arthur Conan Doyle, Edgar Allan Poe, O. Henry, Agatha Christie, Stephen King, The Twilight Zone, Outer Limits, and Alfred Hitchcock Presents.

Kevin O’Brien opens readers’ eyes to the disastrous consequences that might result if a frustrated inventor figured out a way to stop society’s constant cell phone usage in “Cell Phone Intolerant.”

“All Aboard” by Hank Phillippi Ryan involves an enthusiastic PR executive who, while riding a train, overhears a plot to oust a coworker. Ryan answers the question: “is not information as powerful a weapon as a gun or knife?”

Joseph Badal takes readers into the eyewitness account of a mass murder in a church in “Gone Forever.”

Linwood Barclay’s “Night Shift” details what it’s like to be a journalist working the “in the dead of night” shift, only to receive a call from a person planning a killing spree.

Teens having a graveyard sleepover find out what can happen in a cemetery in the middle of the night in Heather Graham’s “Midnight in the Garden of Death.”

In Paul Kemprecos’s “The Sixth Decoy,” readers tag along with PI Aristotle Socarides as he investigates a theft and murder involving a billionaire recluse.

Jeffery Deaver returns to his roots of writing horror in his supernatural gothic story, “A Creative Defense,” in which a man commits horrible murders with a paranormal event.

Rhys Bowen’s “After Midnight” revisits Cinderella—both a retelling of the old classic and a modern version.

John Lescroart throws readers into the minds of teenagers whose bad deeds may or may not go unpunished in “Easy Peasey.”

“Tonic” by D. P. Lyle takes fans into a pickup truck in rural America with two not-so-smart good old boys trying to make a quick buck but who fail miserably.

In Jon Land’s “ATM,” reality blurs with fantasy as a young man in New York City needing direction finds it in the instructions he receives from a place he least expects.

Here, Deaver talks with The Big Thrill about his love of short stories and the varied use of suspense by the featured authors.

Tell us more about your love of short stories.

Indeed, I truly enjoy short-form fiction. With a novel, it’s important to develop a hero and set him or her up against an equally developed villain. We need to like the protagonist. But for me, a short story exists for one purpose only: the surprise ending. I’ve written stories with thoroughly unlikeable characters, but they work because of the twist—there’s a reason I called my first two collections Twisted and More Twisted.

What is the most important advice you’d give short story writers?

As in my writing course, I have to say this is Jeff giving advice to Jeff—what’s worked for me. With that caveat, first understand that short stories and novels are two different species, serving different purposes. A novel achieves emotional impact from creating fully formed characters, meeting increasing levels of conflict, which is ultimately resolved in a way satisfactory to readers. A short story achieves impact from a wallop of a surprise. If you have an idea for a novel, then write a novel; don’t start with a short story, thinking you’ll expand it. That generally doesn’t work.

Second, I always plot everything before I write, short stories too. You don’t have to do an extensive outline, but you need to know where you’re going before you start.

What was it like working with the authors included in the anthology?

What a stellar crew this was! I don’t know when I’ve been in such an esteemed company of writers, all crafting stories at the top of their game. The variety of creative vision particularly struck me, from classic detective to psychological suspense to procedural to fantasy. This book has everything!

What inspired your return to horror and your story, “A Creative Defense”?

I never got over The Twilight Zone! I’ve always had an affection for the occult (in writing, I hasten to add), and when I heard the title NOTHING GOOD HAPPENS AFTER MIDNIGHT, for some reason I didn’t think of a classic crime in the dark of night, but of a play on the title that had to be something otherworldly.

This is the age of the internet where everything you’ve ever said and done (including after those three margaritas in Cabo) is available at the tap of a return key. I’m not sure there’s much my readers don’t know. I suppose one thing is that I love comedy and enjoy making people laugh as much as I enjoy making them shiver in terror. I did a book presentation once, and a woman came up afterward and said she was surprised. After reading the book, she expected me to be gothic and dark-scary, but my remarks made her laugh. To this day, I believe she was disappointed.