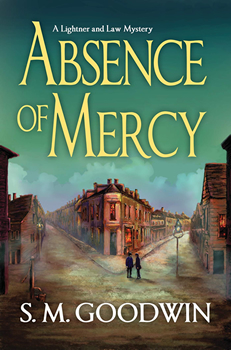 Lord Jasper Lightner has come back from the Crimean War with a chest full of medals and a head injury that has robbed him of much of his past.

After the Home Office approaches Jasper to take on a top-secret investigation—which he completes with quiet distinction—Jasper joins the Detective Department of the London Metropolitan Police.

Jasper’s father, the Duke of Kersey, finds the high-profile position most unsuitable for his son and pressures Home Secretary Sir George Grey to pull Jasper off active duty and offer him his choice of a sinecure position with the London Met or a year-long appointment in New York City to train detectives on the new force.

Jasper barely steps foot off the boat in New York when he is catapulted into a triple murder case involving three NYC millionaires.

His only help in a city that is poised on the brink of a police uprising is disgraced NYC detective Hieronymus Law.

As the bodies continue to pile up, the two men need to put aside their suspicions and work together to save not only their careers, but their lives.

I used to teach college-level survey classes on American history, and writing this book allowed me to explore pre-Civil War life and politics on a much smaller scale. As an historian, I’ve always found the periods of time immediately before and after wars far more fascinating than the wars themselves. To the extent that any single city could reflect an antebellum Northern mindset, I believe NYC is that city.

Lord Jasper was a major in the British Army and was one of the cavalry officers who led soldiers in the (in)famous Charge of the Light Brigade. He’s done “spy” work for the British Home Office, and he is a practitioner of Canne de combat and Savate—the French street fighting style developed in the port city of Marseilles. Jasper is also a disciple of the founder of France’s Sûreté, Eugène François Vidocq.

One of the most exciting things I discovered while researching for ABSENCE OF MERCY was the New York City Directory, which is the 19th century equivalent of the yellow pages/phone book. These books are AMAZING and came out every year, a new volume compiled—from scratch!—over a three-month period, and include almost every person living in NYC as well as their occupation, home & business address, and other gems of information. Who would have believed reading a phone book could be so much fun?