Writing in and About the Dark 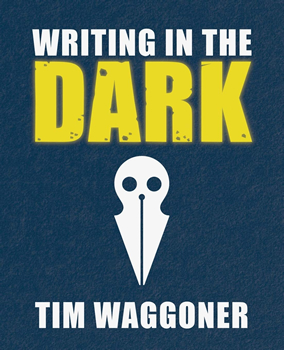 Award-winning author Tim Waggoner may have debuted his first novel in 2001, but he’d been a student of the craft for far longer.

Back in his late teens, when he first started writing seriously, he says he read Lawrence Block’s column on fiction writing in Writer’s Digest—which led him to seek out Block’s books on writing.  “I learned more from him than in any writing class I ever took, and I decided that one day I might like to write a book on writing myself.”

It’s perhaps fitting, then, that this month’s WRITING IN THE DARK pays homage not only to his mentor, but also culminates several years’ worth of posts Waggoner has written for his popular how-to blog of the same name.

It might be tempting to dismiss WRITING IN THE DARK as yet another book on the dos and don’ts of writing fiction, but Waggoner’s compendium homes in on a special, not often covered, genre—horror.

“After 30 years of writing and teaching—and an entire lifetime of loving horror in all its forms—I felt I finally understood enough about writing in the genre to share a how-to book,” he says.

The result is a page-turning, insightful bible that covers everything you need to know—and some things you didn’t know you needed to know—about writing in, and about, the dark. In this exclusive interview with The Big Thrill, Waggoner shares highlights from the craft resource no horror writer should be without.

What draws you to horror? Why does horror matter?

Horror allows us to explore the darkest parts of ourselves, to chart them, understand them, and hopefully make peace with them. When we understand our darker aspects, they cease to have power over us. It also explores big ideas: What’s the nature of reality? Is evil—or death or entropy—more powerful than good or life? And if so, what’s the point of existence then? How do we go on with our lives? There’s also a cathartic effect in horror, whether written or visual. If you’ll pardon the pun on a horror movie franchise, there’s a profound emotional purge that takes place when reading or watching horror. My wife is not a horror fan by any stretch of the imagination, but she loves going to horror conventions because she says horror folks are the nicest people you’d ever want to meet. I tell her that writing horror is what keeps us nice!

The genre has evolved so much in recent years—the line between it and similar genres almost blurring. How did you navigate that in terms of setting parameters for WRITING IN THE DARK?

I didn’t navigate that line so much as embrace it. Throughout the book, I discuss how the techniques I talk about can be used in other genres, such as thriller, suspense, mystery, noir, crime, science fiction, fantasy, romance, and cross-genre. I give examples of work that I consider “horror adjacent,” such as The Silence of the Lambs, which is a cocktail of horror, thriller, suspense, mystery, and procedural. I included numerous short interviews with professional writers in the book, and I invited writers of horror, dark fantasy, thrillers, and suspense to contribute. I sometimes use “dark stuff” as an umbrella term for horror/thrillers/suspense/crime, and there’s a lot of crossover in both the audience for dark stuff and the creators of it. I think such crossover is a huge strength, and I’m glad to see so many creators exploring it.

What do you think is the most distinguishing difference between horror and thriller?

If horror and thriller aren’t the same genre, they’re at least next-door neighbors. Horror presents a nightmarish distortion in a main character’s reality, whereas thriller focuses on a real-world threat to a character and how that character responds to that threat. If a character is in a bank when a violent robbery occurs, that’s a thriller scenario. It’s terrifying, but it’s part of our expected reality. We know such things happen. They’re real, and therefore they reaffirm reality, even if that reality isn’t pleasant. But if that same bank robbery occurs, and the main character sees the robbers as horrible demonic figures when to everyone else the robbers appear to be ordinary humans, the main character’s sense of reality has been challenged. The threat is now unknown. Are they demons? Is the main character hallucinating? If these creatures are supernatural, what sort of abilities do they have, and what are their true motives? They probably don’t need money, so why are they there? It’s this element of the nightmarish which distinguishes horror from other “dark stuff’ fiction—and which makes it so much fun to write!

What are three things that make horror writing different than other types of genre writing—and how have you tackled these topics in WRITING IN THE DARK?

In genre fiction, old tropes can still be effective—the brilliant but quirky detective, the robot who wishes to be human, the fantasy realm threatened by a dark force, etc. But much of horror’s power comes from a sense of the unknown, and once a trope becomes too known, it loses its power. In my book, I discuss ways to make horror tropes fresh by putting fresh spins on old tropes or inventing new tropes based on your personal experience.

I’m not sure this makes horror different than other genres, but it’s highly dependent on writing style. In order to create a feeling of forward momentum, an adventure novel might be written in a relatively straightforward style—short declarative sentences, short paragraphs, short chapters—all to make the story a fast, exciting read. But horror depends as much on atmosphere as it does anything else, maybe more so.

Also, it’s important to write with a close identification with the main character’s point of view. Horror happens inside people, so we need to know what a character is thinking and feeling throughout a story. We need to see horror build within them. The character’s mental and emotional state is everything.

The book covers a staggering amount of content. In your years of writing and blogging, what would you say are your most frequently asked questions about the genre?

Where do you get your ideas? Every writer gets this question, but when people ask it of horror writers, there’s an extra layer to it. They want a glimpse inside our dark, bizarre, twisted minds. People are often disappointed to discover that we have no mystical insight into the darker aspects of existence. Dark stuff simply fascinates us. It stirs our imaginations and makes for stories we love as both audience members and creatives.

What’s the most disturbing scene you’ve ever written? Readers tell me it’s in Chapter 11 of my novel Like Death, and who am I to argue with them? (And no, I won’t describe the scene for you here. Trust me—you don’t want me to.)

What is the best horror book you’ve read in the last year, and why?

The American by Jeffrey Thomas. I had the honor of reading the book before publication, and my blurb says it all: “An exquisitely-written, compulsively-readable dark thriller steeped in Vietnamese culture with eerie supernatural overtones. The characters—villains with a touch of humanity, heroes with more than a hint of darkness—are haunted by ghosts of the past, both literal and metaphorical. This is one of the best books I’ve read in years, and you’d be a fool to miss it.” The American is due out in November. Read it—you’ll thank me!

I’ve signed to write two more horror novels for Flame Tree Press. A Hunter Called Night features a mysterious man named Arron who’s on the run from a supernatural creature called Night. Arron barricades himself in an office building, putting the lives of all the workers inside at risk. Lord of the Feast is about a family who attempted to create their own god a decade ago. The process went disastrously wrong, and the family members went their separate ways, each taking a piece of the aborted god with them. Now one of the family wants to resurrect the god—but to do it, he’ll have to confront his relatives, who have no intention of cooperating with him.