It’s Lights Out for Rapp in Latest Thriller 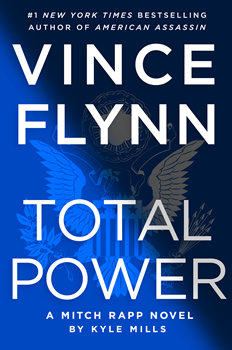 In TOTAL POWER, Mitch Rapp gets his lights knocked out, quite literally, when a villain whose intelligence is almost as big as his ego succeeds in taking out the entire US power grid with the aid of a terrorist group. The impact of the hit is such that the power may stay down for a very long time.

Thriller books usually end before the bomb goes off, or the catastrophe is avoided at the last minute due to the hero’s deeds. TOTAL POWER stands out because the terrorists manage to take down the grid and the reader gets to see the fallout. This time around, Rapp has to operate in a country plunged into darkness and full of desperate people and in which many of the things he relies on—like communications, transportation, or even food and water supply—are not available.

“I did it because of my interest in creating that universe but also to throw a new challenge at Mitch,” author Kyle Mills says. “He’s used to being the guy who stops the attack in the nick of time, but what would he do if he failed? Years ago, I wrote a book called Darkness Falls that was about an environmentalist group trying to destroy the world’s oil supply. In the end, the hero saves the day, so the aftermath is pretty attenuated. When I finished, I wondered if I’d made a mistake letting the world off so easily. I found myself wanting to explore a scenario in which the antagonists succeed and civilization is dragged back 200 years. With TOTAL POWER, I finally got to do it.” 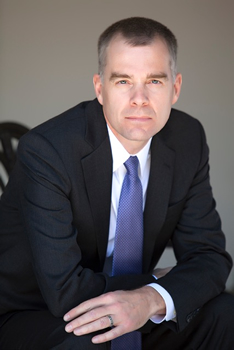 Mills recalls that the research into a total blackout scenario was fascinating and terrifying in equal measure. The thing that surprised him the most was how many pages the government has written on the grid’s vulnerabilities and how little has been done about those vulnerabilities.

“According to one congressional study,” he says, “only nine major substations would have to be taken out to put the entire country in the dark. And the security on these substations isn’t much more than chain-link fences. Another thing that shocked me was the casualty estimates. If the grid stayed down for a year, the government predicts that 90 percent of Americans would die. So on the order of 300 million people.”

The evil mastermind behind the attack is none other than an American who happens to have access to key information enabling him to plan and carry out an operation of this magnitude. John Alton is sort of a megalomaniac, a Bond-esque level of villain.

“He was super fun to write,” Mills says. “Alton is a psychopath with delusions of grandeur and a burning need to put himself above other people. He’s also brilliant and has spent years planning every detail of his attack on America. So catching him and trying to repair the damage he’s done is not a trivial task.”

Mills sits on the tailgate of his ’52 Chevy pickup in September. When he started the restoration, he never dreamed it would be a five-year project. “I told my wife two weeks max,” Mills says. “I’ve never lived that down.” Photo credit: Kim Mills.

In some parts of the book we get to view the world through the eyes of John Alton and see how he has nothing but contempt for the government and the truths that he perceives as lies, like the lunar landing in 1969.

“I honestly didn’t plan on him being a conspiracy theorist, it just came out as I was writing him,” Mills says. “The paranoia seemed to fit his character and provide more clues as to why he would go down this path. I wanted both his motivations and his capacity to feel real to readers.” 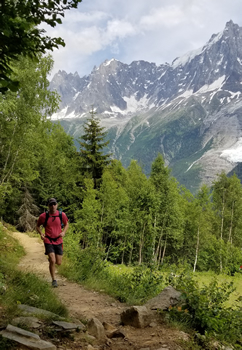 Mills runs on a trial in Chamonix, France, in July 2018. “Show me a trail like this one,” says Mills, a sports fanatic and outdoor enthusiast, “and all I want to do is get out and explore.” Photo credit: Kim Mills.

Rapp stops at nothing to get what he needs and complete the mission—even if sometimes he has to resort to torture, believing that the end justifies the means. Then again, writing torture scenes can be a challenge.

“In my own books, torture scenes are rare, but they’re something of a staple in Vince Flynn’s,” Mills says. “The difference between our handling of them is that I try to focus on the cat and mouse of it more than the brutality. I want to portray Rapp outsmarting the person he’s questioning as opposed to just inflicting enough pain that the subject spills his guts. It also feels more realistic to me that way.”

Taking over a series is far from an easy job, but after six books, Mills has earned the trust of Flynn’s fans. One such fan in particular is Ryan Steck, who’s passionate enough about the series to name a son after Mitch.

“Ryan is an absolute encyclopedia about the Rapp series,” Mills says. “When I find a hole in my knowledge, he’s the guy who fills it. If I need to know if Mitch Rapp is a boxers or briefs kind of guy, Ryan’s got my back!”

Before wrapping up, we must address the recent reactions from fans about the previous book, Lethal Agent, as it featured a scenario that’s close to what we’re currently dealing with in reality. 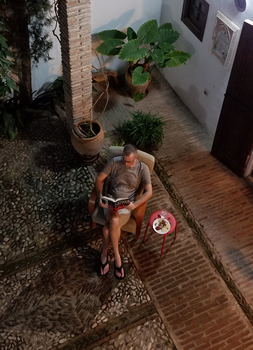 Mills enjoys one last night in Granada, Spain, in September 2018 before flying to the US for his Red War book tour. Mills spent a year in the 500-year-old Arab-style house, which is located in a UNESCO World Heritage Site. Photo credit: Kim Mills.

“I’ve had a strange relationship with predictions over the course of my career,” Mills says. “Sometimes getting a little closer than I’d have liked. Penning a story about a bat-borne coronavirus right before COVID was also a little worrying. I wondered if people would have virus fatigue and not want to read the book. In the end, though, that didn’t happen. Fans continue to be excited about it. This experience wasn’t as bad as with Sphere of Influence, though. In that book, I wrote about a very 9/11-esque scenario and turned it in on 9/3. I had to rewrite a bunch of the book to make it publishable.”

Mills hopes that everyone has fun with TOTAL POWER. “In a way, I think COVID has made it feel even more real,” he says. “People have a stronger sense of what it would be like if the machine that keeps modern civilization running suddenly failed.”

“I’m so knee-deep in the 21st installment in the Rappverse that I can already feel the April deadline creeping up.”