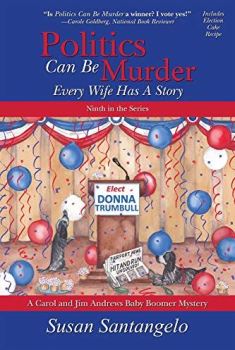 The hit-and-run death of a schoolmate rocks Carol Andrews’ world. The tragic accident, still unsolved, soon becomes a rallying cry for pedestrian safety in an upcoming town council election. Ignoring the advice of her husband, who points out that she knows nothing at all about the political arena, Carol eagerly signs on to manage the election campaign of a new-to-politics female candidate. But when the always nosy Carol goes beyond her job description and starts asking too many questions, she discovers that politics can be a murky world of hidden secrets, greed, and murder.

Susan Santangelo, author of the Baby Boomer series, recently spent some time with The Big Thrill discussing her latest cozy mystery, POLITICS CAN BE MURDER:

I was a political science major in college and have been involved in political campaigns. I write a humorous series, and I’ve used humor to tackle an important issue: politics. As Tip O’Neil, the late Speaker of the House, once said, “All politics is local.”

I was so happy to learn about the Campaign School at Yale University, whose mission is to increase the number and influence of women in elected and appointed positions.

POLITICS CAN BE MURDER is the ninth title in the Baby Boomer mysteries and picks up an unresolved thread in In-Laws Can Be Murder, book 8. I didn’t originally plot it that way, but my protagonist, Carol Andrews, insisted on it. She’s very bossy. But it’s not necessary to have read book 8 first.

Such a tough question! All the writers who wrote the Nancy Drew series, of course. Agatha Christie, the Grand Dame of them all. Nobody has more twists and turns in a plot than Agatha, including in her private life. I love the characters in Martha Grimes’s brilliant Richard Jury mysteries, especially Aunt Agatha. Parnell Hall’s Puzzle Lady series forces me to solve a crossword in order to unravel the plot, and his chief character is hilarious. I loved the late, great Jane Haddam’s Gregor Demarkian series. Her descriptions of Demarkian’s Philadelphia neighborhood and her vivid characters, plus her intricate plotting, are top-notch.

My books are written in the first person. I wish someone would ask me if the series is autobiographical, and if I’m really Carol.

Susan Santangelo is the author of the humorous Baby Boomer mystery series. She is a member of Sisters in Crime, International Thriller Writers, and the Cape Cod Writers Center, and also reviews mysteries for Suspense Magazine. She divides her time between the Gulf Coast of Florida and Cape Cod, Massachusetts, and shares her life with her husband, Joe, and two very spoiled English cocker spaniels, Boomer and Lilly. Both dogs also serve as models for the books’ covers.

The September 2020 Edition of The Big Thrill