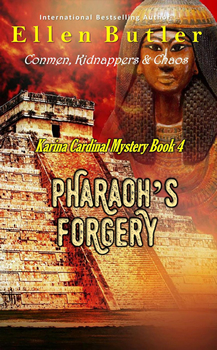 Vacations gone awry is a common misfortune for many of us at the moment, but in PHARAOH’S FORGERY, the fourth title in Ellen Butler’s Karina Cardinal series, Karina’s girls’ getaway involves a fair more crooks, conmen, kidnappers, and killers than the average travel insurance claim.

In Butler’s latest thriller, we find Karina ready to enjoy the sun, sand, and margaritas of Cancun with lobbyist pal Roderigo after plans with her sister fall through. However, it’s tough for the pair to relax knowing that in Karina’s suitcase sits a mysterious package she promised to hand off to her eccentric neighbor, Mrs. Thundermuffin. Turns out that package holds an Egyptian death mask. As long as they have the artifact, it’s not just mosquitoes Karina and Roderigo need to worry about attracting.

When chaos erupts, the duo is lucky to have friends in the right place—at their backs. But they’re in one hell of a jam. And they could be going home in something tackier than a souvenir T-shirt—more like a body bag.

The Big Thrill caught up with Butler to find out more about her new action thriller, PHARAOH’S FORGERY.

The fire at the National Museum of Brazil features heavily in PHARAOH’S FORGERY. What was it about this tragedy that made you want to make it a part of Karina Cardinal’s latest adventure?

I was in the midst of writing Karina’s third mystery, Diamonds & Deception, when the museum’s tragedy came across my news feed. I am an enthusiast of both history and artwork. Needless to say, the destruction of so much human history was a crushing blow to Brazil and the art community at large. Luckily, through the digitization of Google Arts and Culture, the collections are not completely lost to mankind. Once I found out the art was available online, I spent hours touring the collection virtually. Afterwards, I couldn’t keep the tragedy out of my mind and realized I wanted to incorporate it into one of Karina’s storylines.

So why did I decide on an Egyptian funerary mask? Ever since reading my first Amelia Peabody novel by Elizabeth Peters, I’ve been fascinated with Ancient Egypt and spent many hours researching its history and culture. When I came across the destroyed museum’s Egyptian exhibit, I knew I had to work it into one of Karina’s adventures. While many may wonder why there is a Mayan pyramid on the cover, rather than one from Egypt, I remind people Egyptian artifacts have been spread far and wide across the world, and pieces can turn up anywhere. Still, I wanted to tie in a flavor of Egypt, and I wanted to take Karina on a trip. Not yet having had the pleasure of visiting Egypt, I decided Karina’s adventures needed to take place at a pyramid that I have visited. El Castillo at Mexico’s famous UNESCO World Heritage site Chichen Itza fit the bill. If it hadn’t been for the works of Elizabeth Peters, I doubt PHARAOH’S FORGERY would have been written. You could say this novel is an homage to Amelia Peabody’s Egyptian adventures.

It was great to see Karina’s neighbor Mrs. Thundermuffin take on a bigger role in this book. Where (or who!) did you get the idea for the eccentric character (and her even more eccentric name) from?

Mrs. Thundermuffin was inspired by a woman who used to live in my grandmother’s condo complex in Florida. As a kid, I always thought she wore the most fabulous clothes. She had been a travel agent and her clothes came from the different countries she traveled. I remember she once wore a Japanese kimono to a cocktail party. I think I stared at it the entire night. When I became an adult, I realized this woman was a bit of an eccentric, and, taking some of those attributes, I exaggerated them to create Mrs. Thundermuffin. As for her name, I felt, for such an eccentric character, she needed an equally peculiar name to match. Mrs. Thundermuffin made her debut in Karina’s first novel, Isabella’s Painting, and small cameos in the other two books. She was such a fun character, I said, “Why not develop a storyline around her?”

With this being the fourth book in the series, Karina really has been through a lot. What inspired you to make the psychological toll of international crime-stopping a part of this story?

To be honest, I waffled back and forth over putting her psychological issues into the storyline. I even had a discussion with my editor about it. So far, Karina’s been attacked by a mafia thug, chased by a rogue international agent who targeted her for death, and had her sister kidnapped by sex trafficking gang members. I don’t know any untrained person who this wouldn’t take a toll on. In most amateur sleuth mystery series, the main character falls over a dead body every other week and it’s all cool. There are no mental breakdowns or PTSD. I decided that I needed to address the psychological toll these stressful escapades were taking on her.

Moreover, I think it’s important for readers to see her denial and the realization that she finally needs to do something about it. I recently read a sad statistic that the suicide and addiction relapse rates are up 30 percent since COVID. For too many years society has stigmatized mental illness. Organizations such as Mental Health America and Heads Together are trying to dispel the stigma and help normalize the fact that there are times in our lives when we could all use some mental health therapy. I wanted to show that the people in Karina’s life are trying to tell her they see her struggling and that it’s okay to seek help.

You’ve previously mentioned that you love writing this in this genre as you can combine Agatha Christie-style mysteries with the action of modern-day thrillers. Which Christie title would you love to see updated with a KC spin?

As a classicist, I’m not sure I could do that. Agatha Christie was in a league of her own, and I don’t think I would want to see her wonderful puzzle-piece-style mysteries turned into an action-adventure flick. I recently watched the trailer for the new movie Death on the Nile, and I loved its predecessor, Murder on the Orient Express. I couldn’t imagine turning one of her methodical masterpieces into one of the chaotic adventures that embroils Karina. Perhaps instead of updating an old Christie title, I’d rather see a new one where a young Mrs. Thundermuffin helps Miss Marple solve a crime.

Will we see Karina again?

Yes, I’m working on the next Karina Cardinal mystery, as yet unnamed. Karina and Mike have been split up for some time. However, Mike gets into trouble and turns to Karina, and eventually Silverthorne Security, to help get him out of a mess that could not only ruin his career but see him behind bars at a Club Fed for 10 to 15 years.

Ellen Butler is the international bestselling author of the Karina Cardinal mystery series and award-winning historical suspense, The Brass Compass. Fans who enjoy the suspense of Melinda Leigh and the humor of Janet Evanovich’s Stephanie Plum will fall in love with Butler’s Karina Cardinal. Her experiences working on Capitol Hill and at a medical association in Washington, DC, inspired the mystery-action series. The Brass Compass has won multiple awards for historical fiction and is compared to such bestselling novels as Kristen Hannah’s The Nightingale. NY Times bestselling author Susan Elia MacNeal included The Brass Compass on her list of top ten favorite novels about female spies written by a woman.

Butler is a member of Sisters in Crime, International Thriller Writers, and the Office of Strategic Services Society. She is an admitted chocoholic and confesses to a penchant for shoe shopping. Ellen lives with her family in the suburbs of Washington, DC.