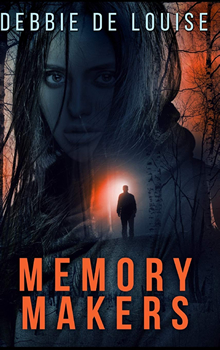 Debbie De Louise’s new novel, MEMORY MAKERS, is a unique medical suspense story that focuses more on the characters’ motives and traumas than the complicated mechanics of a drug trial.

In an author’s note, De Louise states, “I’ve taken poetic license in describing the clinical trial depicted in this book including the way the trial was conducted. It is not based on any current or real clinical trial and is purely fictional.” This strategy may allow the reader to focus on what is most important to the book’s protagonist. Lauren Phelps desperately wants to retrieve a childhood memory so she can put the past behind her and move on with her life. She is an investigator, but being unable to resolve her own trauma dramatically impacts her ability to form lasting relationships. Desperate to find answers she believes are locked deep in her brain, she decides to enter a drug study meant for dementia and Alzheimer’s patients, but to which she is accepted due to her unusual circumstances. Lauren is willing to risk her life because she believes things can’t get any worse, but she soon learns that what she fears most still exists.

For readers who love felines, there are two that figure prominently in this novel. De Louise’s appreciation of cats is obvious, but it’s her personal experience with parents who suffered from dementia and Alzheimer’s that imbues her book with authenticity.

The exclusive interview that follows provides more insight into her career and process.

What is your writing process? How, when, and where do you write?

I write in the early morning. I try to complete a scene or a chapter before I go to work. During the day and at night, I think about the next scene or chapter and when I wake up the next day, my subconscious picks up on errors from what I’ve written the previous day, so I can go back and fix them and then move the story forward in a cohesive way.

What’s the most interesting thing you learned in your research for this book?

I already knew that it isn’t easy and is a lengthy process to market drugs in the US, but I wasn’t aware of the various testing phases new drugs need to go through before they are approved for the public.

Why did you choose to set the drug trial so far away from the protagonist’s home?

This was a random decision, but it also set the stage for the main character, Lauren Phelps, to meet some of the people from her past who had moved away from the area.

Has your career as a librarian helped or hurt your writing?

Both. Being a librarian has helped me keep abreast of the mystery market as I read reviews and order from publishing journals. However, when libraries purchase my book, I lose the sales that I might’ve had by people who can read it for free.

As an author, what would you most like to achieve in your career?

I would like to find a literary agent who could help me sell my books to a large publisher so they could be brought to a wider audience. I’ve been querying agents with interests in cozy mysteries with an unpublished cozy, the first of a proposed series, and am hoping to have some luck soon.

Have you personally ever left an important function to travel a distance to help a beloved feline?

Actually, just the opposite. Years ago, I had a diabetic cat who required daily insulin injections. I was offered a chance to attend a library conference in California but had to turn it down so I could stay home and care for him.

How do you balance your personal life, your job as a librarian, and your career as an author?

It isn’t easy. I have a very supportive family. I’m also an early riser, so I take advantage of that time to work on my writing. I allocate the rest of the day to my job and family.

What do you like most about being an author? What do you dislike about the writing life?

I love it when I’m working on a book or story and the words just flow on the page. I enjoy creating twists and puzzles in my mysteries that sometimes even surprise me.

I’m nearly finished writing the fifth book of my Cobble Cove cozy mystery series featuring a librarian, a newspaper publisher, and a library cat in a small, fictional upstate town called Cobble Cove. This book, tentatively titled No Gravestone Unturned, features the murder of the caretaker’s son on Halloween in the Cobble Cove cemetery. A few days before, three couples come to town to bury their mother who once lived there. With the same characters as the four books before it, this mystery will include several changes, including chapters that alternate from the past to the present; pet cats whose thoughts readers will know; and a subplot about a battered wife. Here is the unedited prologue to this upcoming book that I hope will be published this fall:

Noah Burrows approached the cemetery gate. He fished in his pocket for the key and slipped it into the lock. It was nearly midnight on Halloween, and his father had instructed him to check the graveyard in case one of the local teens jumped the gate and messed up the tombstones with toilet paper as they’d done in the past. He was glad that the gate didn’t creak open because he’d oiled it that morning.

Stepping through as quietly as his Adidas sneakers would allow, he spotted a figure in the back of the cemetery near the newly dug grave. It held a shovel and was digging at the plot next to it. Trying not to alert the intruder, he avoided the leaves scattered around the grounds, but one crunched under his sneaker, and the masked man dropped the bag he was holding and turned to face Noah.

“Excuse me, but the cemetery is closed. If you don’t leave now, I’ll call the police.” Noah removed his cell phone from his jeans pocket.

Before Noah could reflect the blow, the intruder raised his shovel and whacked the caretaker’s son hard on the head. As the ground spun up to meet him and Noah fell across the grave the vandal was digging, the last thing he saw as things went black was the inscription on the stone: Kurt McKinney, beloved father of Gwendolyn, Kenneth, and John. (July 24, 1894 – September 3, 1964).

Debbie De Louise is an award-winning author and a reference librarian at a public library on Long Island. She is a member of International Thriller Writers, Sisters in Crime, the Long Island Author’s Group, and the Cat Writers’ Association. Her novels include the four books of the Cobble Cove cozy mystery series. Debbie has also written two standalone mysteries, Reason to Die and Sea Scope, as well as other books and short stories of various genres. She lives on Long Island with her husband, daughter, and three cats.