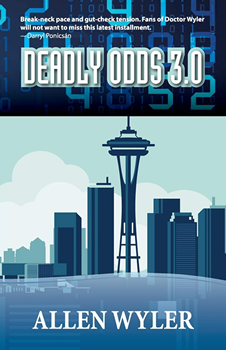 In the latest installment of Allen Wyler’s Deadly Odds series, techno-wizard Arnold Gold must stop a ruthless Islamic terrorist from exacting revenge. Naseem is a fierce adversary who will stop at nothing to get retribution for the death of her brother by killing Arnold and stealing SAM, his artificial intelligence software.

Here, Wyler chats with The Big Thrill about the inspiration for his Deadly Odds series, his fascination with cyber-crime, and how his canine character Chance came to be.

What inspired the story in DEADLY ODDS 3.0?

Computers and hacking have fascinated me since I read Clifford Stoll’s seminal book, The Cuckoo’s Egg: Inside the World of Computer Espionage, published in 1989. I was so enthralled that my first (abysmal) attempt at publishing a novel featured a hacker, Radical Dood. Although that story ended up in the recycle bin, Dood just kept hanging around the back of my mind like a jingle. My agent suggested that my chances of selling a book would improve if I switched to medical thrillers. I took her advice, and she sold Deadly Errors to Tor/Forge.

I wanted to create a protagonist who could be in a series, but unlike a detective or spy, doctors aren’t thrown into thriller-centric predicaments. So my medical thrillers ended up as standalones. This was okay, I guess, but then what?

After taking a deep breath and steeling my courage, I wrote Deadly Odds, featuring Arnold Gold, a socially/sexually naïve computer genius who flies to Las Vegas to lose his virginity. I loved my characters and felt like I’d found my groove. 3.0 is the third book in the series, and I’m having a ball creating each story. Until 3.0 came along, Dood had always remained in the background, pleading to appear on stage. And up he pops in this one. Only a cameo appearance, but he may live to hack another day. The Dood is one talented dude.

Tell us more about how the question “what if a computer bug infected medical software?” led you to move from writing medical thrillers to techno thrillers?

At the time I was writing Deadly Errors, computerized medical records had just become a hot topic in medicine, and it resonated with me. The problem became how to make a dry subject both interesting and terrifying.

Writing medical thrillers was a great way to establish a toehold in the field, but doing so became “a job,” a means to an end. To me, the subject was rather boring to write about. I’d spent my entire professional career practicing medicine and was looking for a path into something fresh and exciting. Writing about a subject I love is much more appealing. As trite as this sounds, every day I look forward to working with my present cast of characters. Yes, the subject matter requires a ton of research, but I love learning.

What have you learned from your collaboration with technical computer experts and your research into cybersecurity?

Picking the brains of my sources is an enjoyable facet of my writing, although I worry that I’m becoming a giant pain in the ass. But all of them are gracious and willing to help. For example, Jonathan Tomek has guided me to some great references, books like Open Source Intelligence Techniques and Extreme Privacy. Their input and enviable patience with me are invaluable and provide a layer of nuance not available when researching a question on Google.

What is Arnold Gold’s next mission?

Arnold has no mission other than to live his life in peace and modest prosperity with Chance (his beloved Belgian shepherd) and hopefully Rachael (his girlfriend). But Rachael laid down the law: he must stop gambling. As a result, he’s scrambling to devise another way to earn a living, and that always seems to attract trouble. (Arnold had developed an artificial intelligence system that made gambling hugely profitable. But because he won more than he lost, he drew unwanted attention, which led to his predicament in Deadly Odds.) This leads us next to Deadly Odds 4.0.

Readers love to ask me questions about Chance, Arnold’s totally cool Malinois. Where did I get the idea? Did I base him on my pooch? Why did I incorporate him into the series?

My wife and I are huge animal lovers, especially doggies (and support Pasado’s Safe Haven, an excellent animal rescue and sanctuary near where we live in Seattle). We each grew up with a pooch, and in our married lives, we loved our two wonderful German shepherds. But after the death of our last dog, she refuses to consider having another, saying the pain of losing such an integral component of our life is just too great to bear again. So Chance is my new doggie companion (sort of like the kid with the imaginary friend, I guess).

And where the hell did the words “choober” and “rabber-de-jabber” come from? Those were our neologisms for behind-the-ear scratches and tummy rubs. Our pooches loved them.

How did Chance wind up as a character? Arnold landed in Honolulu under an assumed name after fleeing Seattle, alone and in fear for his life. As protection, he installed some serious state-of-the-art security in his new home but also realized that printed circuit boards and digital logic couldn’t match the keen senses of a dog. Chance not only gave him that extra layer of security but became his sole companion and canine soul mate. They are now a pack.

A neurosurgeon by training, Allen Wyler left active practice to become medical director for a startup medical device company, Northstar Neuroscience. After that company went public in 2006, he retired to full-time writing. After publishing his first two medical thrillers, Deadly Errors (2005) and Dead Head (2007), he served as vice president of awards for the International Thriller Writers and has written a series of successful thrillers, two of which have become finalists in the ITW Thriller Awards. The Deadly Odds series moved his plots from medical to techno-thrillers. He lives in Seattle.