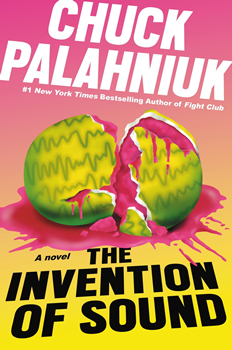 Rumor has it that while on tour promoting his novel Diary in 2003, Chuck Palahniuk’s short story “Guts” made at least 67 people faint.

For someone hoping to earn any kind of reaction to their work, that’s about as high a compliment as a writer can get—but that was almost two decades ago, and Palahniuk’s prose continues to evoke the kinds of visceral response most authors only dream about.

That’s certainly true for his latest release, THE INVENTION OF SOUND, a chilling, evocative horror story that harkens back to Palahniuk’s earlier work and may, for real, scare the shit out of you. In it, we follow two primary characters—Gates Foster, a desperate father who hasn’t stopped looking for his daughter who went missing 17 years prior, and Mitzi Ives, a sound artist who has carved out a niche creating the immersive sounds that give Hollywood horror flicks their authenticity—screams so bone-chilling, they might as well be real.

Only the naïve would think Hollywood is just the glitz and glam you see on screen, but THE INVENTION OF SOUND gives us a glimpse at the darker, more sinister underbelly of the industry—and it’s likely you’ll never think about a movie scream in the same way again.

No question THE INVENTION OF SOUND is destined to share the kind of accolades earned by cult classics such as Fight Club and Choke, but it goes without saying, this chilling new release is also primed for the big screen—sound way up, of course.

His is not a career that needs reviving—Palahniuk has been a book-a-year author since his first sale with few exceptions, eight of his novels were optioned, and millions of copies of his books have sold all over the world—but it’s conceivable that THE INVENTION OF SOUND may just be the novel that nudges his work out from under the shadow of Fight Club’s staggering success. Or not. Palahniuk doesn’t really care either way.

Thanks so much for taking the time to talk to The Big Thrill. We’re living in some crazy times—how are you doing through all of this?

Welcome to my normal:  Everyday isolation, the need to self-motivate every morning, and a constant battle against the urge to just jerk it.  Such is a writer’s life. 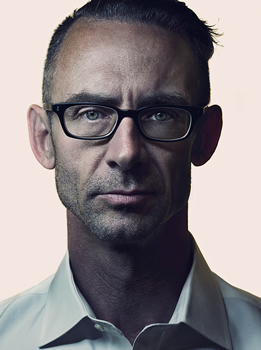 I know it treads dangerously close to the dreaded “where do your ideas come from?” question, but the premise of THE INVENTION OF SOUND is so twisted, so amazing, I can’t help but ask—what sparked this?

Before I knew better, I agreed to record the audiobook for my novel Choke. For six days I sat in a sound booth, in a trashed swivel chair that gave off the smell of sweat. “That,” the sound engineer told me, “is the smell of David Ogden Stiers.” The actor best known for his role on M.A.S.H. had lived much of his life in Oregon and had used this same booth to record voicework for Disney features. I was like Proust with his madeleines, and started pumping sound engineers for stories, jargon, trivia whenever I found myself in a radio or recording studio. Joe Rogan’s engineer told me about “tape bleed,” and an engineer for the BBC told me about the Goofy Holler. I wrote a story called “The Scream Collector,” and a friend read it and told me about the Wilhelm Scream. By an other-worldly coincidence, a cover artist for the Fight Club 3 comic depicted a tattoo artist wearing a concert T-shirt for a band named The Wilhelm Scream.  This series of boom-boom-boom coincidences seemed to validate exploring the idea of screams as a deadly commodity.  Thank you, Mr. Stiers!

I’m a movie buff, with a particular affection for horror and thriller, and I love all the behind-the-scenes stuff. But I’d never given much thought to what goes into making the sounds—like the screams. Was there anything that surprised you while you were doing research for this book?

In Portland, the owner of Jackpot Records told me, “You never hear a dry voice anymore.” By that he meant that all commercial recordings are processed beyond anything that might occur naturally. My impression now is that anyone’s singing can be tweaked to sound fantastic. And, yeah, I grew up listening to Karen Carpenter overdubbed to sound like a thousand Karen Carpenters, but the tricks to “fatten” and “sweeten” and “warm” a voice… those broke my innocent heart. 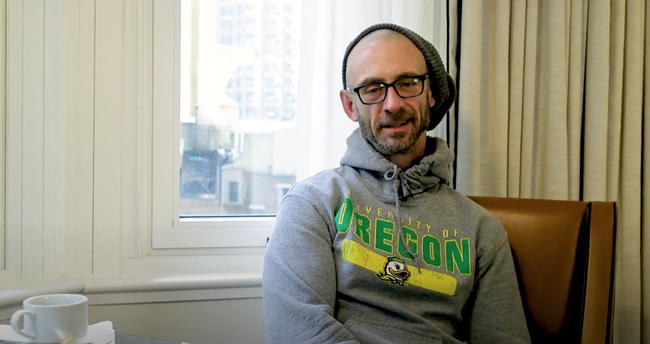 Palahniuk discusses THE INVENTION OF SOUND in a video for Grand Central
Publishing.

Your work is often connected to the concepts of consumption and commodification—and that’s certainly true for THE INVENTION OF SOUND. What is the fascination of these themes for you?

Call me a naïve kid, but I used to think Sammy Davis Jr. went on Johnny Carson because the two were friends. I thought people went on Phil Donahue and Oprah Winfrey because they were all besties who enjoyed having a laugh in front of a million strangers. Small town me, it wasn’t until I had to promote a book and movie that I saw the truth:  Everything is about selling something.  There is no Santa Claus.  Condoms bust.  You see enough broken-down movie stars in the green room, waiting to pitch something on daytime television in Cedar Rapids, and you want to hang yourself.  In a world where people define themselves by consumption, people eventually become the commodity. Soylent Porn.

THE INVENTION OF SOUND is intense. It’s dark. Few books scare me—this one did. Given our current situation—global pandemic and all—it might be tempting for some writers to hover closer to the surface, but you went deep. How do you get yourself into that dark place for writing—and perhaps more importantly, how do you get back out when the words are on the page?

The truth?  There is no getting “out”; there’s only getting “through.”  I get all the way through. 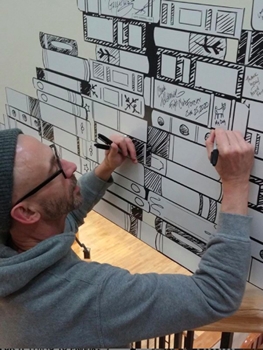 Palahniuk signs the staircase to the Rare Book Room at the Strand Bookstore in New York City.

In recent years, there’s a blurred line about what constitutes “horror,” and while the jacket might not suggest it, THE INVENTION OF SOUND is absolutely a horror. What attracts you to the genre?

In regard to his film, The Exorcist, the director William Friedkin said it was ultimately uplifting because it supported the idea of heaven and hell and an afterlife. As a lapsed Catholic I’m drawn to horror for that same reason. Plus, in our Tuesday afternoon religious training class, the nuns were always showing us Dore engravings of the martyrs being tortured to death. I chose St. Lawrence as my Confirmation saint because while he was roasted to death he looked incredibly buff. Likewise, E. C. comics were always collapsing sex and death; for example, every dead woman came back for revenge with a fantastic rack and her shroud rotted into see-thru tatters. Hubba hubba, as the French say.

I always think it’s important for authors to stretch outside their comfort zone, but THE INVENTION OF SOUND feels more like classic Chuck, harkening back to your earlier books. Intentional?

Thank you. The book was written and sold before I realized I’d revisited the “grieving father” from my novel Lullaby. And at the risk of sounding human, I think that character attracts me because I’ve never had children. The childless part of me will always look to fill that hole by depicting men who’ve lost or killed their kids. 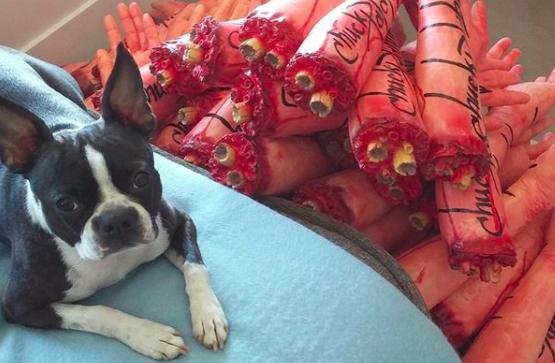 Speaking of earlier Chuck work… There are a handful of authors who are so well known for a particular piece of work that fans still associate them with that single piece of work, despite whatever other success they’ve enjoyed—David Morrell with First Blood (Rambo) for example. Does it bother you that you’re still so associated with Fight Club?

After a workshop, one of my students asked me, “How does it feel to have had such a limited success?” Instead of killing him, I pointed out that a writer only needs one memorable novel and one short story to enter the pantheon. My favorite example is Shirley Jackson; ask most people, and they can only name The Haunting of Hill House and The Lottery.  I have Fight Club and Guts, so the rest of my career will be gravy.

I always peek through reviews after I read a book and one of your fans described THE INVENTION OF SOUND with: “It reads like a NyQuil dream.” Do reviews impact your writing?

Every time I seriously consider killing myself, I reflect on how incredibly happy my death will make the critic Laura Miller.  That knowledge, alone, has saved my life innumerable times. 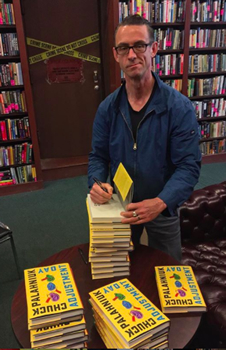 Palahniuk signs copies of his 2018 novel Adjustment Day at The Mysterious Bookshop in NYC.

The Big Thrill is as much for writers—aspiring and seasoned—as it is for readers. What advice would you offer to writers, many of whom are struggling to be creative right now, on how to keep momentum on the work when the world around feels somewhat stranger than fiction?

Picture this:  Summer 1987, I’m working on the Freightliner Trucks assembly line. The chassis line is packed with half-built vehicle frames, the temperature is over a hundred, the roar of impact wrenches and hydraulic bolt guns is deafening.  In the middle of this misery, a coworker stands up in a fog of welding sparks and smoke and screams, “Calgon!  Take me away!”  At the time, this was the slogan for Calgon bubble bath, and there was always a harried young housewife screaming it on television. I will never forget how funny it was to see a guy smeared with axle grease and sweat scream this slogan. In short, a writer’s job is always to invent a bigger problem than what currently exists.  Doing so, she will give readers a sense of respite and perspective. As Ira Levin might say, “At least you’re not pregnant with Satan’s baby.”

Are you able to share anything about what you’re working on next?

I have to share this… Yesterday I was accepted into the Writer’s Guild of America.  At a recent pitch I gave to HBO, one of their executives told me she’d fainted as a college student during one of my book events. That officially makes me the oldest person in Hollywood (occasionally there).  All my eggs are never in one basket, not anymore.  I’m working on a YA novel with my agent’s assurance that “nothing is too dark for YA these days.” And I’m always writing short stories.  Now I’ve added a scripted podcast and a proposed anthology series for television. Tomorrow, I have my first official meeting to discuss Fight Club presented on Broadway.  Someday, someone I’ve never met will walk into a conference room at Quibi or Apple or HBO and ask, “What’s that awful smell?”  And someone else will say, “That’s the smell of Chuck Palahniuk’s sweat.”